A Republican Senate hopeful in Georgia is making the calculation that nothing gets primary voters more fired-up than free gun giveaways.

Rep. Paul Broun (R-Ga.) announced Wednesday that he's launching a second assault weapon raffle in his campaign for the Senate seat being vacated by retiring Sen. Saxby Chambliss (R-Ga.). In the first incarnation of the campaign stunt, Broun gave away an AR-15; this time, he's upped the ante by giving contributors the choice of either a Colt Marine Corps 1911 Rail Pistol or a Colt Mag Pole 6920 Flat Dark Earth.

"Barack Obama is finally feeling the heat of his failed policies, and he is grabbing at straws to get more friends in Washington," the email read. "That is why Barack & Michelle Obama, Harry Reid and the Washington Democrat machine are ferociously working to get my opponent elected to the Senate. They know Michelle Nunn will serve as a rubber stamp vote for the policies of the Obama Administration, and we cannot afford to let that happen. One of the first changes they will make is to take away our 2nd Amendment rights."

He also stated that this giveaway was helping to protect the Second Amendment rights of the American public from gun-grabbing Democrats.

"It's no secret that the Democrats and liberal media would love to take away our guns and mandate every aspect of our lives, but I refuse to let them get away with that," he wrote.

Broun's email claimed that "over 100,000 patriots" signed-up for his first giveaway, though the prize went to a Maryland resident rather than one of the voters who will decide whether to give Broun the Republican nomination in the May 20 primary.

At a candidate forum in January, one of Broun's primary opponents, Rep. Phil Gingrey (R-Ga.), called Broun's assault weapon raffle "a little gimmicky." according to the Atlanta Journal-Constitution. 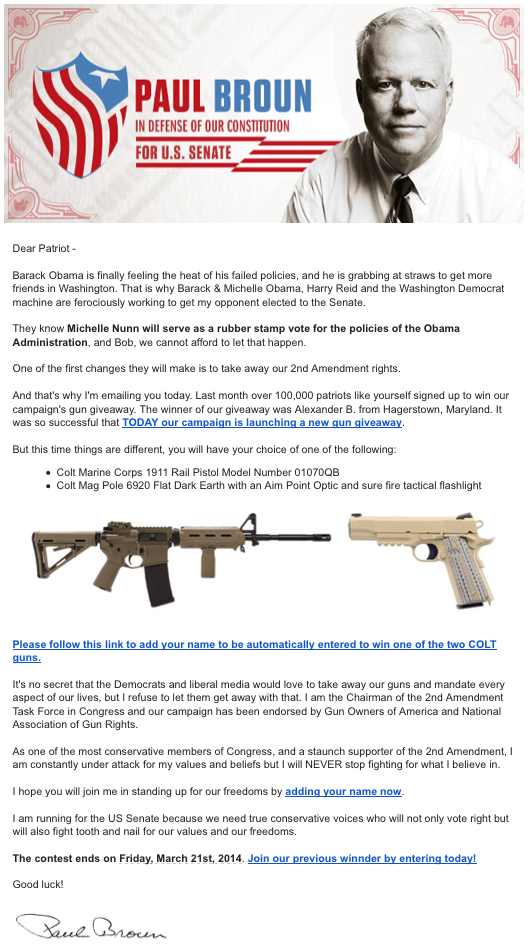