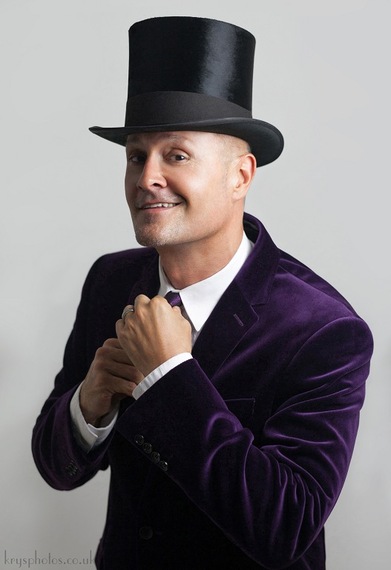 Literary events usually have a tedious quality. No matter how brilliant the writer, no matter how hyped the event, there's always an air of forced enthusiasm about the whole enterprise. Great authors who drip charisma like wax on the page sometimes find that their sizzle has been sucked dry by the time they hit the stage. Yet, somehow, Paul Burston, the creator of the Polari Literary Salon in London, has, through sheer charm, hard work and diligence, transformed the possibilities of what a literary event should be: a space crackling with energy, ideas, excitement, raucousness and just plain ole fun. That he has accomplished this with a celebratory night devoted entirely to LGBT literature, one of the most marginalized and misrepresented cultural forms, feels like a radical two-finger salute to the self-created limitations of the mainstream publishing industry.

Since the traditional publishing model is wheezing in its attempts to catch up with the digital wild, wild west -- a landscape where the latest poems by Carol Ann Duffy are competing for your attention against not just other books but television, Twitter and Tumblr -- the role of the solitary writer has now been expanded to include salesman and street performer, carnival barker and freak, amongst other things. It's all about synergy, which is why public readings are more vital than ever, not only to create a buzz around a book but to drive sales.

Burston not only gets this revolution but is actively engaged with it. Polari, for example, has expanded its repertoire to include sold-out tours around the country as well as the creation of the Polari Prize for Fiction, an award handed annually to the best first book by an LGBT author in the UK. The biggest hurdle at the beginning, Burston says, was "convincing the owner of the bar that customers wouldn't run screaming into the street when the music was turned off and the reading began!" He concedes:

There was often a problem with background noise, which is off-putting when you're reading aloud. And there were times when the microphone wasn't working. But despite these challenges, the night grew really quickly.

Books should be a pleasure, not a duty. A lot of literary events have a tendency to be rather staid. I put a lot of effort into making sure that Polari is never like that. I always aim for as diverse a lineup as possible, with a variety of voices. The secret is to make it look effortless, so people relax and enjoy themselves -- performers and audience alike. But it really doesn't feel like hard work. I love what I do.

This energy is what makes Polari feel more like a movement. Burston, however, prefers to think of Polari as a family unit united in its appreciation of great LGBT literature:

I've always considered myself an activist. Twenty-five years ago I was chaining myself to railings and getting arrested for blocking traffic with ACT UP. As a journalist I've always felt that I have a duty to be political. So I guess that impulse is always there. Being LGBT, being public about it and writing about it is, by its very nature, a political act. Part of the reason I created Polari is because LGBT writers are often sidelined at book festivals and literary events. Seven years on, I'm being invited to bring Polari to various book festivals, from Soho to Stoke Newington to Huddersfield. So if Polari is a movement, it's one that's gaining ground.

Burston, who worked for many years as the LGBT editor of Time Out magazine, is also a successful novelist, with four critically acclaimed, bestselling books to his name. He has just completed his fifth, a psychological thriller about a young woman who's married to a soldier. "It's taken me a while to write," he says, "but now that it's done, I've already started work on the next one. I can't tell you much about it yet, except to say that it's also a thriller."

Does he feel there's still have a long way to go in terms of mainstream perceptions of what LGBT literature is all about? He says:

Unfortunately, yes. There is still the perception that books by and about straight people can be read and appreciated by anyone, but books by and about LGBT people are for our eyes only. It's ridiculous. You don't need to be black to appreciate a book like The Color Purple. Why on Earth should you need to be gay to appreciate the many great gay works of literature? Hopefully things are changing, but there is still a lot of caution around LGBT work in the publishing world. Our stories are seen as too "niche" for mainstream tastes. And while that remains the case, there'll always be a need for events like Polari and prizes like the Polari First Book Prize.

Paul Burston's tireless drive and passion make Polari what it is: London's most exciting and enjoyable literary movement. Here's to many more years of excellence.

For more information on all the awesome things Paul Burston has planned for Polari, please visit polariliterarysalon.co.uk.