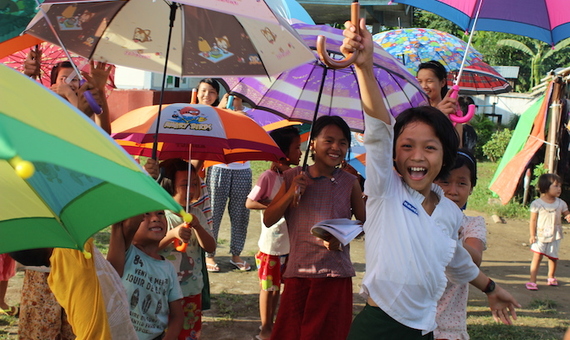 Paul Chan Htoo Sang is a 17 year-old journalist from Myanmar. Paul grew up in the country's capital, Rangoon, which is also the birthplace of Rangoon Revealed, a storytelling collective he and his friend Thaw Htet started in 2014. Inspired by Brandon Stanton's Humans of New York, Rangoon Revealed mostly share photographs and stories of people in Rangoon, however Paul recently travelled to Myitkyina in Kachin State to also meet and interview residents at three of the 70 Internally Displaced Persons (IDP) camps in the region. The camps are the product of fighting between the government of Myanmar and the Kachin Independence Organization, who would like the country to operate as a democracy. I interviewed Paul for Impolitikal.

Who are Rangoon Revealed? Why did Rangoon Revealed start?
Rangoon Revealed is a group of active youths who want to hear stories of people's lives, and share the stories again. Although there are a lot of people who are trying to get stories, most of the time only three persons - Thaw, Dolphin and myself - post stories onto our Facebook page. A few years ago, there was a poor family living near Thaw's building, and whenever he came back home from somewhere he saw this little girl from that family. The father was a drunkard and sometimes he beat the little girl, and Thaw always wanted to talk to her but didn't. Then one day the family left the neighborhood. Since that day Thaw wanted to talk to people, and get their stories. That's how Rangoon Revealed started.

Why did you visit Myitkyina?
It was Thaw's idea to travel around the country before he left for college, so we started to plan the trip. Somehow we were able to get an appointment with Daw Khon Ja, who is one of the leading activists helping the IDP in Kachin State. When she told us about what's happening there I wanted to do something about the IDP myself. By that time we had already started crowdfunding, and we raised funds from our schools as well. When we got a little over $2000, I went to Myitkyina.

What was your experience of visiting the camps?
I visited three camps in Myitkyina: Jan Mai Kawng camp, Mi Na camp and N-Jang Dung camp. The first camp is one of the largest camps near Myitkyina. When I got to the camp with my two Kachin friends, I wanted to go around and talk to people, but the camp manager didn't allow me - so we gathered all the children, and we read a story for them. Although the story was quite short, since there were 300 children we took about an hour to finish it. This was all thanks to my friend: Lagyi from Myitkyina. He was the storyteller since I couldn't speak Kachin. Mi Na is also one of the largest camps, but it is outside of Myitkyina so we had to go for approximately 30 minutes to get there. This camp's management was done by volunteers from Myitkyina who have been living along with the IDP since they first arrived to Myitkyina. It was well-managed. When I told them about our project, they were more than happy to help us. I talked to around six people there in Mi Na camp. Almost all of them have been posted onto our Facebook page. The third camp is a small camp. It was built by a Baptist Father: Lagyi's father. There are around one hundred students there. I interviewed eight people there, and I have only posted a few posts from this camp so far.

Read the original at Impolitikal.com.