Paul Cornell is one of those multi-hyphenate guys that excels at everything. He's written novels, televisions shows (like Doctor Who), comic books, and anything else you can imagine. And he's good at it.

This week, he has a new ongoing title coming out from Vertigo comics that is of significant interest to readers of The Huffington Post. It's called Saucer Country and, in the author's own estimation, it's a mad hybrid between The X-Files and The West Wing.

The new ongoing series, which starts this week, is quite cleverly written and covers American politics with a very keen and knowing eye. That fact is almost startling when you realize that this book is written by a Brit. Drawn by artist Ryan Kelly, Saucer Country has a very clean art style that stays out of the way of the fascinating dichotomy of the story, which revolves around New Mexico governor and Democratic Presidential candidate Arcadia Alvarado. She's like a cross between Bill Richardson and Elizabeth Warren in the body of a Mexican Sarah Palin.

While on the campaign trail, dealing with her alcoholic ex-husband, Republicans, and illegal immigration, she realizes she's been abducted by aliens.

This is a world where all the UFO and alien conspiracies are true. In some ways, it reminded me of a Brian K. Vaughn's Ex Machina, which paired politics with the world of superheros. If this book lives up to the promise its first issue makes, it could easily be as good as that book was. 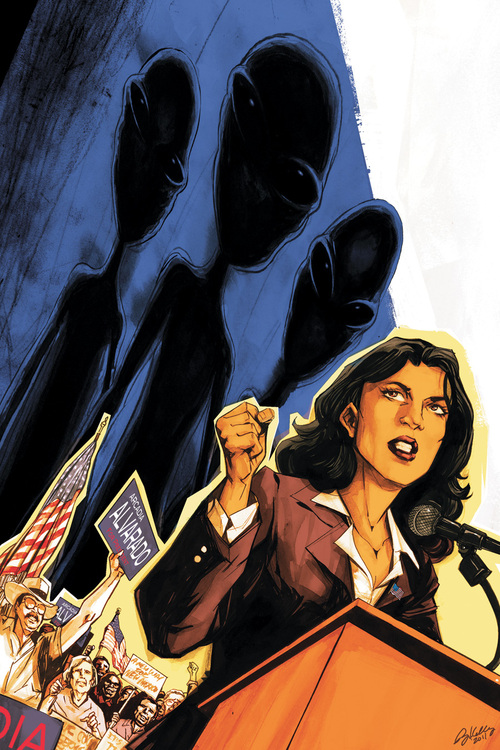 Before reading the issue, I was loathe to believe that this book was going to marry those two worlds, politics and aliens, capably, but Cornell and Kelly pull it off beautifully. This is a perfect addition to the world of Vertigo comics.

I liked the book so much, I got a chance to talk to Cornell about it:

Bryan Young: The tone this book gives you is if you crossed the behind the scenes machinations of American politics with an alien autopsy. What brought you to combine the rich history of UFO and alien conspiracies in a setting where it's a major political issue?

Paul Cornell: Well, I wanted to have that contrast between the world that UFO mythology comes from, a liminal world, often of the poor and the left out, and the high level of society it speaks about, the people who are meant to be running the conspiracies, and for the first time have it play out the other way round, so we feel, alongside Arcadia, that we might have some chance of finding out the truth.

BY: What truth is it that you're looking to find?

PC: You certainly shone light on a convenient shorthand with that question. Arcadia's initial search gets exponentially more complicated. She thinks she's after simply the truth behind what happened to her in a car on a lonely stretch of road looking down on Santa Fe, and what that might mean for her fellow Americans. But when she pulls on that thread the world starts unraveling, and the question becomes more like 'whose truth?'

BY: Being British, it seems like you're looking at the American political system from a much more objective standpoint than most writers could. Do you think that's worked as an advantage or disadvantage as you've been putting this book together?

PC: Distance is always helpful, and the fact that I'm a U.S. politics junkie helps a lot.

BY: Where is it you get the brunt of your American politics news?

PC: From the internet, like all sensible folk who enjoy civilized debate, including from your good selves. And the BBC, of course.

BY: This book starts with a couple of classic scenarios in alien conspiracies. As the book continues, what should we expect as far as Alien and UFO lore?

PC: Everything, all the multi-dimensional self-contradictory loveliness of the myth, from Serpo to Nordics to swamp gas to Reticula. We're not limiting ourselves to one explanation, this isn't about aliens with plans and names and weapons, this is about a real world mythology and how it shapes western culture.

BY: You're releasing this book a week after "Super Tuesday" and this looks to be one of the most ruthless and brutal elections in American history, was that part of the plan? We have 7 months or so until election day, will we see Governor Alvarado get to the election in that time? Or is that just a coincidence?

PC: Her election will be later than that, but I think it's a good thing this title is coming out in an election year.

BY: Although this is being billed as an ongoing series, most Vertigo books tend to have an ending in mind. Is there a definite point you're writing toward?

PC: I think people who saw The X-Files (and we're The X-Files meets The West Wing) would be pleased to hear, and we're willing to sign a document to this effect, that We Have An Ending In Mind. But that's not at any definite point. Let's see how it goes down the line.

BY: The American political process must already seem like a circus, how do you think adding Aliens to the story will highlight that?

PC: We're about 50/50 on the political thriller/SF, and both comment on the other. Arcadia has to juggle a campaign with her own quest, the former of which could be ended at any moment by the latter.

BY: Tell me about the heroine, Arcadia Alvarado. She starts this series with very definite ideas about immigration, how will actual aliens alter her perspective on "illegal aliens"?

PC: That pun is close to our hearts. They don't alter her views on that at all, but they start to frame how she sees the world in a lot of ways.

BY: And how would you describe her to a new reader?

PC: She's as hard as nails, the most determined person you ever met. She thinks 'a thing is what it is'. And someone who thinks that is the last person you'd want to abduct if you want your thing to maintain its mystery.

BY: Does the "illegal immigration" debate seem as absurd from an outside observer as it does to people like myself or Arcadia?

PC: I think every country in the world has it, with varying degrees of rationality. Certainly, the heart of it is just a basic caveman fear about The Other. (We like getting into that too.) But making The Other into Us is something the U.S. used to be a machine devoted to
doing. And it could be like that again.

BY: Because books with explicit political agendas of the left to undermine the safety of our nation get boycotted and get lots of good attention (see Life With Archie #16), what would hardline conservatives who will never read the book or even consider it find as a reason to boycott it? You can make something sensational up if you like....

PC: I absolutely think that A Million Moms should boycott this title. It worked for Archie! We have profanity, a profoundly liberal politician spouting off all over the place, and there's loads of sex too. Oh, and the naked people from the Pioneer Ten space probe plaque are two of our major characters. (That's all actually true.)

BY: And my last question: Seeing as you wrote the single best episode of Season 1 (Father's Day), what are you most looking forward to from the seventh season of Doctor Who?

PC: Moffat writes the most Science-Fictional episodes of any current telefantasy show (except sometimes Fringe), and I hope he'll carry on pushing that envelope. And thank you.

Saucer Country #1 comes out March 14 and will be available in finer comic book stores everywhere.

Bryan Young is the editor of the geek news site Big Shiny Robot! and author of God Bless You, Mr. Vonnegut.