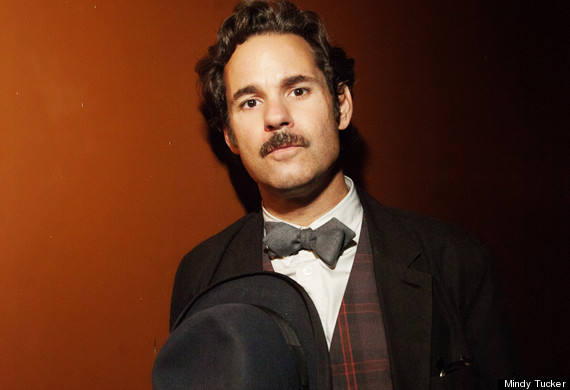 You've seen Paul F. Tompkins in TV shows, films, and commercials, but this weekend he's taking center stage. Laboring Under Delusions, PFT's latest Comedy Central hour-long special, premieres Saturday night at 11 p.m. While Tompkins covers a wide variety of topics in his act, his new special is all about work -- namely those less-than-glamorous jobs you take in pursuit of a show-business career.

I spoke to PFT about his work experience, his stand-up career, and the advice he'd give to anyone stuck in what feels like a dead-end job.

Louis Peitzman: What can we as an audience expect from a Paul F. Tompkins comedy special?

Louis Peitzman: Your new Comedy Central special is Laboring Under Delusions. How did you come up with the theme, and how did you arrive at that title?

Paul F. Tompkins: Well, my material has become more story-oriented. So after my last hour, which was called You Should Have Told Me, the through line being that they were all stories about my coming of age, kind of, becoming a grown-up and putting away childish things. I thought, 'Well, I kind of like that idea.' I like the idea of a through line that can go through an hour. And I realized I have a lot of stories that are about jobs, about working. So I just kind of put them all together, and they came up with a through line, which is ideally what makes it relatable to an audience, which is my fear of getting in trouble at work, which I think is a thing that we all can understand.

For the title, I wanted it to be something that was somewhat fun but not too much of a terrible pun or anything. Laboring Under Delusions involves work, but also, I think, an emotional state that tied it all together for me.

Louis Peitzman: What does it mean to you to "labor under delusions"?

Paul F. Tompkins: Well, certainly to sustain a career in show business, you have to have a certain amount of delusion, because it's such an insane way to make a living. The idea that you're going to say, "Oh, I think I deserve to be paid attention to, and people should listen to what I have to say, and everybody should look at me," that's a little bit delusional in a way.

Louis Peitzman: You mentioned that your comedy has become more story-oriented. What is the difference in your approach when you're writing a story versus writing a joke?

Paul F. Tompkins: Writing a joke is so much more about the structure and it's less about the conversation. To me, the thing that I love about stand-up is the intimacy between performer and audience. To get it even more conversational was something that really appealed to me and that I really enjoyed doing. My early experiments with it, with just telling a story from my life on stage, it was so satisfying to do. And seemingly for the audience as well. It's a different thing, and it's a different feeling and a different vibe.

So for the storytelling, to achieve that intimacy, I feel like I have to let the audience in on my emotional state, not just, "Here's a story I'm going to tell by rote, and you're just going to listen to it, because I'm such a wonderfully entertaining fellow." It's the idea of sharing enough of myself that it's not just all about, "Look at me, look at me." There's an element to it of, "You understand what I'm talking about, right? You've been in this place that I've been in," which makes it a richer experience.

Louis Peitzman: So this is a conscious effort on your part to be relatable?

Louis Peitzman: Would you say that's something that many successful comedians do, or is this something you're particularly focused on, that conversational aspect of performing?

Paul F. Tompkins: Oh, I think there's room for all different kinds of comedy and schools of thought. But for me, the performers that I like the best are the ones that share a bit of themselves on stage. So it's not just jokes. It's not just a performance. People who are in the moment, and that there's an immediacy to what they're talking about.

Louis Peitzman: You recount a lot of odd jobs in Laboring Under Delusions. How have all the jobs you've taken throughout your life affected your current career?

But, you know, the day jobs I've had in pursuit of becoming a fulltime entertainer, I guess I've learned patience from them. To be able to do those jobs in the first place, knowing that I had this other thing that I really wanted to do -- because I figured out at a young age what I wanted to do with my life. To recognize, "OK, well, I'm just doing this because it's the responsible thing to take this day job, and earn money for myself while I'm waiting for show business to pay the bills." Recognizing that that's a thing a grown-up does -- you have to be able to take care of yourself, you have to be able to feed yourself and clothe yourself and house yourself while you're chasing this dream. You do what you gotta do, and that was a very important lesson for me early on.

Louis Peitzman: Are there jobs that you still take that you're not thrilled about, just because you want to be working?

Paul F. Tompkins: I gotta say, no. Where that is somewhat qualified is that, as I've gotten older and more mature, I've become less self-conscious about jobs that are less glamorous about others. While it's great to appear on a television show, I did this internet campaign where I was the voice of a puppet for Ford Focus ads. And it was one of the funnest things I've ever done, but I think when I was younger, I would have turned up my nose at that, and not even considered it. Because I was too self-conscious. I was too worried about what other people might think, just on the face of it, just the idea of somebody thinking, "Oh, he's not cool, because he did that Ford Focus puppet ad."

And now it's like, I don't care what people think. I did that job because they were paying me a lot of money to do it, it was a very easy gig, but then the bonus was, it turned out to be an enormous amount of fun. I've learned not to turn my nose up at things just because they're not what other people might consider cool to do. Because I've also matured enough to know, you never know where these things are going to lead, and you never know what the experience is going to be like.

Louis Peitzman: Outside of the Comedy Central special, you do so much. I love that you have a monthly variety-type show in Los Angeles. What abut that form appeals to you?

Paul F. Tompkins: What I love about it is, it's a little bit of everything. It's all the things that I find entertaining, and all the things I like to do. I get to do a little stand-up, I get to do a little sketch comedy, I have musical acts on the show that are people I greatly admire and I just get to watch them, and then I get to do a song with them. Because I like to sing, and even though I'm under no delusion that I'm a professional-grade singer, I can carry a tune enough to sort of irreverently do a song with a person who is a legitimate musician. And sometimes it'll just be silly, and sometimes I'll go for a genuine nice moment. So, to me, it's the best of everything.

Louis Peitzman: You also do a tremendous amount of podcasting. You seem to pop up everywhere. Do you have any downtime?

Paul F. Tompkins: I have historically not had a lot of downtime, but I am making a concerted effort to allow myself more downtime. It has been an effort to do that, and to make myself say no to some things. Podcasting, especially, is a very easy thing to do, to appear on other people's podcasts. And it's fun! But sometimes I have to say, hey, just because I have a free hour in my schedule, maybe I shouldn't do that because I'm wearing myself out.

Louis Peitzman: A lot of stand-up comedians come across as embittered or at least unhappy. You always come across as nice, and you seem to be having a good time. Is that something you work toward, being a nice guy and also maintaining this positive outlook?

Paul F. Tompkins: Yeah, it's just better for life. It's just a better thing to have nice interactions with people than to make anyone uncomfortable, than to try to fill up some kind of lull. Like anybody else, there's times when maybe I don't feel like talking with other people. You don't have to be in show business to not feel like making small talk sometimes. But you know, ultimately, we kind of are all in this together. It makes things easier -- it just makes life easier, if we're all nice to each other. I'm sure that sounds terribly corny, but honestly, it's one of those simple things that it's so simple, it's true, and it's so true that it's simple.

Louis Peitzman: To close, I wanted to ask -- people often want advice on how to be famous or how to make it in show business, and that's tough. But for people who are working a job they hate in the hopes of someday doing what they want to be doing, what advice would you give?

Paul F. Tompkins: I would say, if you're feeling like you've gotta get out of there, get out of there. As a person who stayed in retail, who stayed in the same place for a really long time when I got to a point of bitterness, I got kind of saved by being fired. But I mean, really, if you get fired from a job, you're kind of doing that yourself. The psychology of it is, you're too scared to pull the trigger on quitting, so you're taking the decision out of your own hands.

So if you're feeling like, "I'm miserable and I can't go there every day," you've really got to look for something else. Even if it feels like a lateral move, like going to another day job, honestly you're better off doing that. If the idea is you're working at a job solely to pay the bills because you have ambitions to do something else, if you're not actively trying to do that other thing, you've gotta make sure you're doing that. Sometimes you've gotta take away your own safety net. But if you feel miserable in a day job, in any job, get out of that. Look for something else. Stay in that job until you have the other thing set up, and then go to that other thing. But sometimes you've just got to jump out with a parachute and trust that you're going to land someplace safe.