"If the script was right and all the girls wanted to do it, I would do it. But it really falls on Kristen [Wiig]," Feig told HuffPost Entertainment about the possibility of a "Bridesmaids 2," echoing statements he's made in the past. Not that he's at a loss without part two: "We'll try to get other franchises going."

One of those other franchises could be "The Heat," an action comedy starring Sandra Bullock and Melissa McCarthy as mismatched partners looking to bring down a drug ring in Boston. Twentieth Century Fox was so confident in "The Heat" that the film's release was moved from April 5 to June 28, putting Feig's film in the thick of the highly competitive summer movie season. More proof the studio is bullish on "The Heat": screenwriter Katie Dippold ("Parks and Recreation") is already working on a treatment for the sequel.

With the film out Friday, Feig spoke to HuffPost Entertainment about how Hollywood has changed in the wake of "Bridesmaids," whether fans would accept him directing a comedy with male leads and what he thought of the Photoshop controversy surrounding the film's UK poster.

After "Bridesmaids," your name was attached to everything from "Bridget Jones 3" to "Bridesmaids 2" to "Dumb Jock" with Jon Hamm and Melissa McCarthy; what made "The Heat" stand out among those other options? I was just trying to find that perfect follow-up to "Bridesmaids," one that kept the tone of comedy I loved, and also had strong female characters. But I didn't want to do a repeat of "Bridesmaids." I've always wanted to do an action comedy. When this script came in, it was called "The Untitled Female Buddy Cop Comedy." I was like, "Perfect! That's what I want."

There is a lot of action in this film, which might surprise people. How did you tackle that aspect of the filmmaking? I really enjoy action movies. My wife does too. But we'll be watching them at home, and in the coolest sequence of action, she'll get up and wander out of the room or start reading her iPad. I'm like, "What are you doing?" She's like, "I'm bored." So I didn't want mayhem for mayhem's sake. That's why all the action is in service of the comedy or the story or something. Guys kind of love [massive action scenes], but I'm of a little more feminine sensibility. I love the "Transformers" movies, but there's points where I'm like, "I have no idea what's going on." It all looks really cool, but I'd rather have less that means more.

You mention that "feminine sensibility"; you were recently attached to "Susan Cooper," which is described as a female James Bond film. If you decided to, one day, do a "guy movie," do you think people would feel betrayed? Possibly! Honestly, I would be a little thrown myself too. You know why? Look, guys are very funny. For example, I'd love to work with Will Ferrell -- he's one of the funniest guys on the planet -- but it would need to have a sensibility that wasn't so, "Let's go get fucking laid!" I can't relate to that. For so long I was sent those scripts, because those were the comedies that were out there. Whenever there is a best friend who's a pussy hound, my brain shuts down. Because, you know what? I never had friends like that. I don't believe the dynamic of the nerd always having a friend who's a pussy hound. That's the guy who beats up that guy.

Have you noticed any changes in the industry since the success of "Bridesmaids," or is that film more and more viewed as a one-off? It turned into that more than I thought it was going to. There's definitely an openness, but this summer we're the only studio release with women in the lead roles. We're not advancing as much as we should be. I know there are scripts that studios are trying to do, because now I get sent all of them. But the problem is that they're not that good. Sometimes they try to go the other way, where it's a bunch of ladies who are trying to get laid. I don't like women acting like men; then it's not serving anybody. That's why "The Heat" was really important to me. Because I didn't want to do a romantic comedy. Even "Bridesmaids" had the romantic elements to it with the Chris O'Dowd relationship, which worked great. What I liked about this one was that it didn't have any of that. It's just two professional women in the workforce who are great at their jobs and who are on this adventure.

What do you get out of Melissa as a performer that maybe another director doesn't think of? I want to make sure that everything she does feels completely, 100 percent honest. I don't like any jokes to feel forced or for the performance to feel pushed or heightened. She's great. She's really good at not doing that. But on top of that, I want to keep her in a character that doesn't have those cartoonish qualities. She's so talented that her litmus test is very high. With all of the great comedic performances I know, you can push the actor very far and they'll never go over a line. Working with Steve Carell all the time [on "The Office"], he's so great that way. I used to have fun pushing him a little more because I knew he wasn't going to go into the stratosphere. Like, "Now I'm being crazy!"

Melissa is actually a lot like Steve Carell, especially in how she can handle drama so well. They're very similar. The best comedic actors are great actors, because they're treating it real and honestly.

Were you worried about how Sandra would connect with Melissa? Yeah! I didn't know if Sandra could improv at all. But we really found a way. She'll admit that she was kind of thrown at first by how much improv we do. At the same time, Katie and I really retrofitted that character for Sandra so she could slide into it with her natural inclinations in an improv situation. So, if she just went on instinct, it would fit the character. She loves to go for it. She loves to do comedy.

I doubt you had anything to do with that UK poster for "The Heat" that aggressively Photoshopped the way Melissa looks, but what did you think when you saw that? That's the problem: I have very little to do with that -- especially in the foreign markets. It's a bummer. I love Melissa exactly how she is.

Paul Feig On 'The Heat' & Post-'Bridesmaids' Hollywood: 'We're Not Advancing As Much As We Should'
'The Heat' With Sandra Bullock & Melissa McCarthy 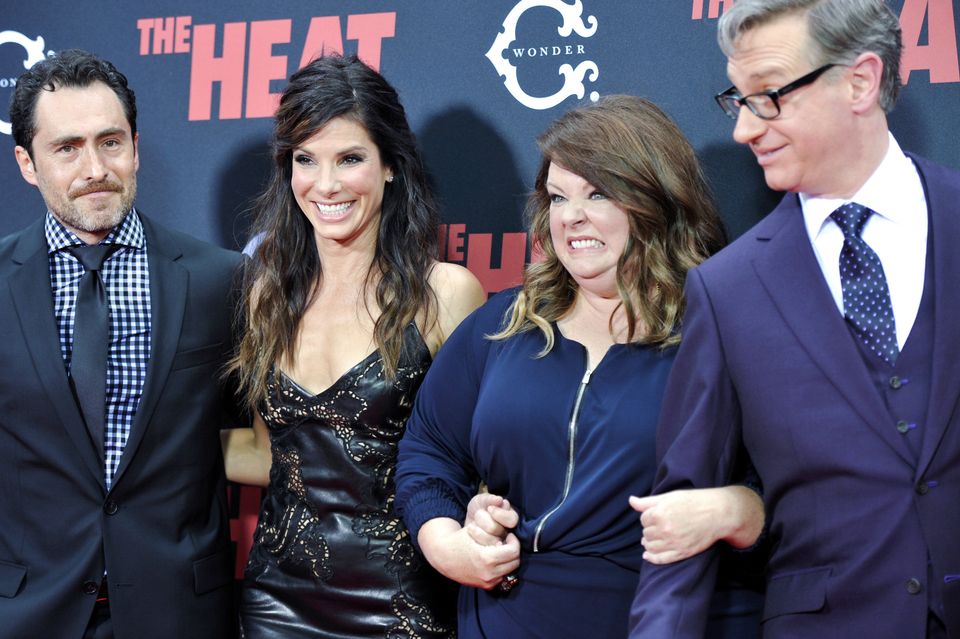