We never spent all that much money on President Obama’s stimulus, and now we're spending almost nothing on it, and that's a shame, according to Paul Krugman.

The most the nation ever spent on the American Recovery and Reinvestment Act, which passed in 2009, amounted to 1.6 percent of the economy, the Nobel Prize-winning economist and New York Times columnist wrote in a blog post Friday. And now most of the stimulus spending under that law is gone, Krugman noted.

Here’s a chart from the Federal Reserve Bank of St. Louis showing the stimulus’ effect on the government's total spending, which Krugman uses to illustrate his point. 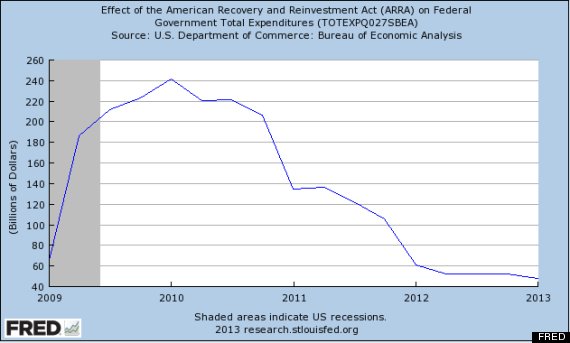 Critics and supporters have widely debated the effects of the stimulus, which Obama pushed in 2009 as a way to lift employment and bring the economy out of recession. Many Republican lawmakers and conservative economists argue that boosting government spending was the wrong way to address the nation’s economic woes, advocating a more austere approach instead. Many progressive economists, including Krugman, have argued that, while the stimulus was a somewhat effective job creator, it was too small to have a major impact.

The literature on the effectiveness of the stimulus is mixed, and the debate over the program has been renewed in recent weeks as people speculate over who Obama will choose to succeed Ben Bernanke as chair of the Federal Reserve. That’s because Larry Summers, Obama’s former top economic advisor and a leading candidate for the post, didn’t do enough to seek a larger stimulus, critics say, and reportedly shot down proposals for a larger figure.

Paul Krugman: Stimulus Was 'Too Little,' And Now It's Almost All Gone
Paul Krugman&#039;s Greatest Takedowns

1 / 9
Chris Christie
Krugman has <a href="http://www.nytimes.com/2012/08/27/opinion/krugman-the-comeback-skid.html?_r=1" target="_hplink">slammed Christie</a> for touting a New Jersey comeback, even when the state still faces a 9.8 percent unemployment rate. He's also criticized the governor for his decision to raise taxes on low-income New Jersey residents, while vetoing a temporary tax boost for millionaires.
AP