Nobel Prize winning economist and New York Times columnist Paul Krugman has issued perhaps the most frightening prediction for the future of the global economy.

In his column today, Krugman worries that a move toward austerity by world governments -- near-term budget-slashing to curb deficits -- will plunge the economy into a "third depression." On the heels of last week's G20 meeting in Toronto, where world governments pledged to halve deficits by 2013, Krugman is deeply concerned that there just won't be enough stimulus in the economy to recover from the prolonged downturn.

We are now, I fear, in the early stages of a third depression. It will probably look more like the Long Depression than the much more severe Great Depression. But the cost -- to the world economy and, above all, to the millions of lives blighted by the absence of jobs -- will nonetheless be immense.

And this third depression will be primarily a failure of policy. Around the world -- most recently at last weekend's deeply discouraging G-20 meeting -- governments are obsessing about inflation when the real threat is deflation, preaching the need for belt-tightening when the real problem is inadequate spending.

Krugman isn't alone in his fear that the world economy is becoming increasingly precarious. The Wall Street Journal noted that members of the Federal Reserve are in private planning for the possibility of a double-dip recession in America -- a concern shared by MarketWatch's in-house economist.

The job picture in America certainly isn't comforting, and the mounting ranks of the jobless may lend some support to Krugman's pro-stimulus thesis. This chart, from the Saint Louis Federal Reserve, shows that long-term unemployment is skyrocketing:: 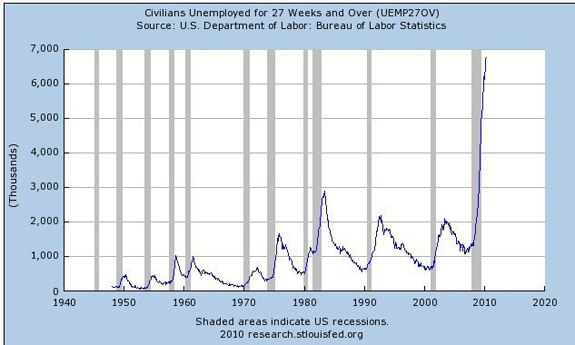 World leaders scared by the Greece's near economic collapse, Krugman argues, are facing a choice between deficits and jobs. An unhealthy reliance on cutting deficits, he argues, will exact a serious price on "tens of millions of unemployed workers, many of whom will go jobless for years, and some of whom will never work again."