“I picked a fight with Grumpy yesterday, and it got a little out of hand," Paul McCarthy told Randy Kennedy at the New York Times during a preview of his latest show, titled "WS."

It's the largest exhibition by the 67-year-old artist and one that won't soon be forgotten. "WS" is billed as "a work in progress that will continue to evolve" at the Park Avenue Armory in New York.

The LA-based artist worked with his son, Damon McCarthy, to create an immersive space within the cavernous Wade Thompson Drill Hall. For his first job as the Armory’s new Artistic Director, Alex Poots teamed up with curator Hans-Ulrich Obrist as well as Tom Eccles to create the right setting for the collaborative father-son project, which takes Disney's "Snow White and the Seven Dwarfs" to truly disturbing places. In a statement, Poots said "[WS] explores the vast and at times distressingly dark corners of the human psyche."

A placard near the door to the space reads: "The exhibition includes images and themes that some visitors may find disturbing. Admission is restricted to audiences over 17." 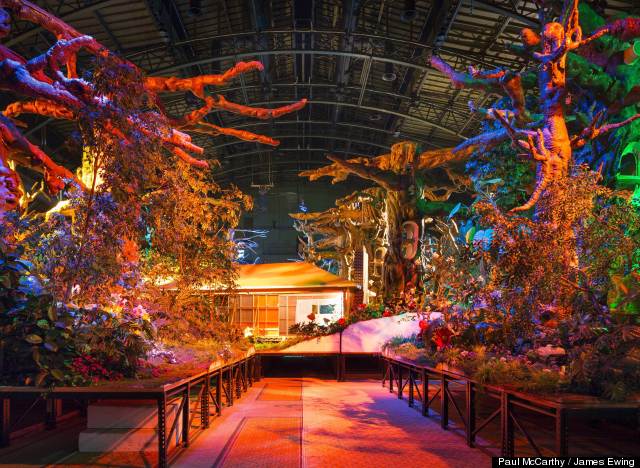 Brave souls ready for a sonic assault will enter the 55,000 square-foot space and immediately encounter the four-channel film, titled, "The Feature, Amory Edit," which features "White Snow," a libidinous version of "Snow White," "Walt Paul" -- McCarthy's unforgettable version of Walt Disney, and seven, well, dwarfs, having a raucous house party. We can't imagine the unedited version, since what is on view is a hefty seven hours long. Move a little further in and you'll encounter a yellow ranch-style house, which is a replica of the artist's childhood home in Salt Lake City. But before you get there, there's a few steps up to a living room containing two dead bodies and the lingering odor of alcohol, sweat and chocolate.

The twisted form of White Snow lies naked on the dirty carpet with what appears to be blood on her face, but a discarded brown Hershey's squeeze bottle on a molested couch provides the real evidence. A bloody, naked Walt Paul slumps with a cartoon character protruding from his open mouth shows that all is not what it seems in this dark fantasy. Moving through the space will offer more clues, which are featured in the accompanying films -- giant mirror images creating an alarming echo chamber of bawdy cartoonish desire, resulting in violent death.

In the rooms off the right hand side of the space, viewers can witness films like "The Prince Comes," where a pompadoured Prince Charming furiously masturbates in a folding chair across from the enchanted forest, or "Olympia," which is arguably a hat tip not to Édouard Manet, but to Gustave Courbet's controversial painting, "L'Origine du monde" (The Origin of the World), with notes of David Lynch's classic film, "Blue Velvet."

In another film, we see Walt Paul in his bedroom, complaining about what a studio executive asked him earlier. "Why does it have to be so big, Walt?" he delivers in a whiny voice. "Because it has to be!" he screams. White Snow strokes his face, saying, "He just doesn't understand... Don't give up."

For those overwhelmed or disgusted by the graphic content of McCarthy's works in "WS," this acts as both an accusation and a pep talk for Walt Disney, the artist, and us. If you've had enough of the sideshow, you can always get a signed "Walt Paul" water bottle for $20 or a "White Snow" dress for $350 in the gift shop. But caveat emptor, viewers. This enchanted forest is a dangerous one.