Sure, everyone gets nervous before going on stage. But when you're about to perform some of the most beloved music in history and on a grand stage in front of the man who made it all famous ... well, that calls for grander measures.

Backstage in the talent tent for the MusiCares Person of the Year gala, music legends requested everything from Advil to space heaters. Elvis Costello stood outside wife Diana Krall's dressing room, chatting with Rock & Roll Hall-of-Famer Duane Eddy, while Neil Young prepared separately in his tour bus. 85-year-old Tony Bennett made a call from his dressing room asking for vodka.

It was hard to know where to look on Friday night inside the packed LA Convention Center ballroom -- but all eyes were decidedly on the man of the night, Sir Paul McCartney. As guests sat down to his personally chosen vegetarian dinner, McCartney ceremoniously chewed the fat with a crowd full of music legends and industry heavy-hitters alike, including Smokey Robinson, Bonnie Raitt, Carole King, Herbie Hancock, Brian Wilson, David Crosby, Jack Nicholson, Richard Branson, Norman Lear and Lou Adler.

It's unclear if tribute concerts often begin with a performance by the person being honored, but Paul McCartney is the biggest rock star that MusiCares has honored (no offense Sting, Elton, Barbara or Stevie) -- and so he opened the night, after a quick welcome from Cirque du Soleil's LOVE acrobats, with "Magical Mystery Tour."

And a magical tour it was -- with Eddie Izzard as emcee and faux-historian, claiming that McCartney's parents were Jacques Cousteau and Katherine Hepburn and that he grew up on a fishing boat playing air guitar. It was a dizzying tale of pop culture folklore and he reminded us, "For Paul McCartney, words are not needed. The music speaks for itself."

The Foo Fighters rocked hard to "Jet" (eliciting a standing ovation from McCartney), and a stunning Alicia Keys belted out "Blackbird" on the piano after saying, "This song has [a] personal effect on me. It's a beautiful honor to be here tonight."

Bluegrass babe Alison Krauss and Union Station performed an acoustic "No More Lonely Nights" on a standalone rotating stage, Tony Bennett crooned "Here, There And Everywhere," and Duane Eddy twanged out an instrumental version of "And I Love Her."

McCartney sat close to the stage -- soaking in the unique versions of each of his songs -- and smiled and laughed with tablemates Tom Hanks and wife Rita Wilson, Stevie Van Zandt, George Harrison's widow Olivia and a white-hatted and sunglass-clad Yoko Ono.

The tenderness of Norah Jones' stunning "Oh! Darling" brought a hush over the crowd, as a part-Victorian, part-country Katy Perry (wearing a gigantic pink petal headpiece) nailed "Hey Jude" on the rotating stage, complete with a rhinestone mic and baton, which she used when the "na-na-na-na" part came in. McCartney gladly mouthed the words.

But the showstopper was decidedly Neil Young & Crazy Horse's "I Saw Her Standing There," an electric performance that drew an easy standing ovation from the entire audience. Coldplay's phenomenal acoustic "We Can Work It Out" brought depth and sadness to the piece, but front man Chris Martin joked halfway through the song, "Why aren't we spinning?" about the satellite stage. He also managed to squeeze in, "We're so happy to be here. We love Paul."

The evening drew to an emotional and intimate close with the duo-ed James Taylor and Diana Krall; first performing "Yesterday" (Taylor) and "For No One" (Krall).

But there's no other way to end a Paul McCartney tribute concert other than with McCartney himself, again. He hopped back on stage, and four days before Valentine's Day, played "My Valentine" for his bride Nancy Shevell. "I'm Gonna Sit Right Down And Write Myself A Letter" and the Wings song "Nineteen Hundred and Eighty-Five" reminded us how long, and with what depth, McCartney has created music over the last five decades. In a perfect conclusion to the night, McCartney sang a lullaby. "Golden Slumbers" melted into "Carry That Weight," and finally, "The End."

Bottles were finished, coats were draped over dates' shoulders, the crew began to strike the set and musicians stepped into black cars or floated off to McCartney's backstage after party. He said little on stage over the course of the evening aside from thanking everyone. But even after the music stopped, McCartney repeated the final words of his song: "And in the end, the love you take is equal to the love you make."

MusiCares is the SWAT team of the music industry, providing "a safety net of critical assistance for music people in times of need," according to their mission statement. The 2012 MusiCares Person of the Year Tribute to Paul McCartney raised $6.5 million (the most in history). Ringo Starr's personal baby grand piano, signed by Starr and McCartney and painted by Peter Max, went for $175,000 in the live auction. Performer Katy Perry pledged $250,000. 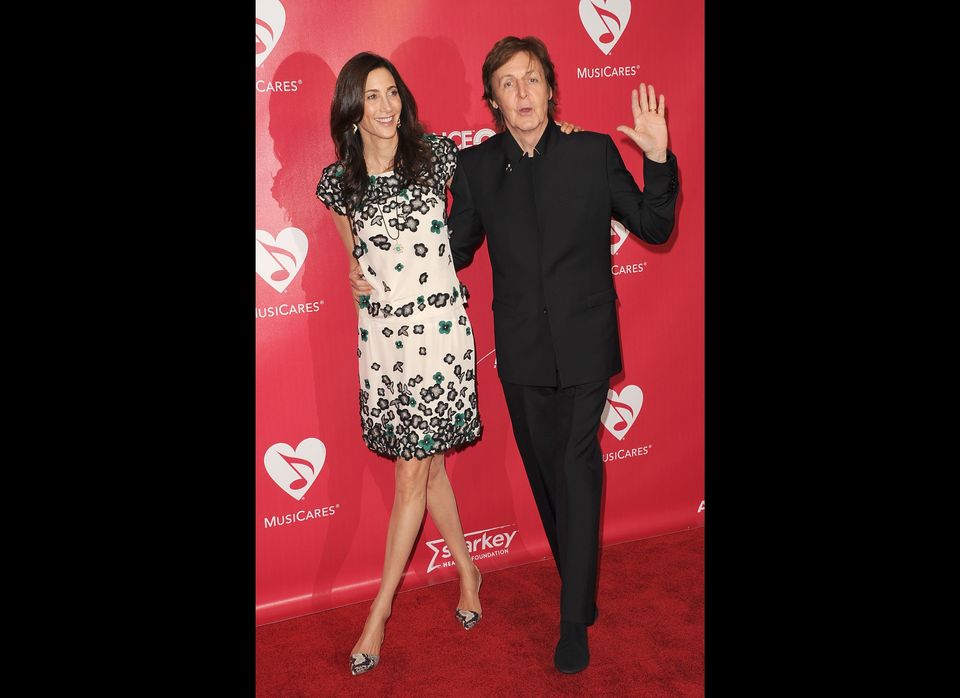