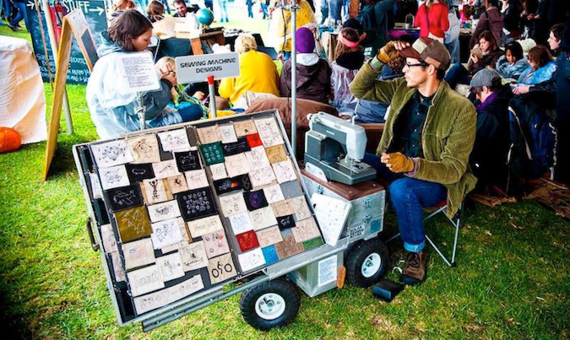 Paul Nosa is a traveling sewing artist and musician. Armed with his self-made, solar-powered sewing machine he drives around the United States in his green van, asking people to conjure five-word scenarios, which he then sews. In theory Paul is based in Tucson, Arizona - in reality he moves around too much to call one place home. I interviewed him for Impolitikal.

Paul Nosa. Can you explain what it is that you do?
I draw with a sewing machine. I got started because I wanted to make functional art. Art people can use. Originally I was a drawer - there's not a good name for us. Draw-er. For an artist who draws.

A sewing artist who draws.
Well there's not even a name for a sewing artist, other than sewing artist. People liked my work but rarely bought it. I decided, Ok I need to make art people can use. It seemed very real to me that the images should be made with thread. It's a long-lasting way to make an image. I started putting designs on shirts, then ties, and dresses. Someone suggested that I make patches. I was like, no, why would I ever do that? I didn't like patches. I never had any interest in owning, or wearing any.

Eventually I started making the patches. I always thought that people needed to see how I was drawing with a sewing machine. There was so much confusion about how the image was being made, I was like, if the sewing machine was just present, and people could see it happening, they would just understand how the process worked. Here's a funny question someone asked. A woman came up and said, Where do I sign up for the drawing? She thought it was drawing for a sewing machine. I thought it was hysterical.

Just point them to the sign.
I've done that. That's very dismissive. Not a good sales tactic. People are like, I can't even think of a scenario. I don't even know what a scenario is! They want an example. There are so many possible scenarios in the world. I always try to give a new example. The only one I ever sort of repeat is, Eating... something. That's me not wanting to think of a new scenario. I actually made a patch called Eating Eating because of this.

How do you even draw that?
So you have kind of a bigger mouth. Side profile. Then you have a spoon, and a guy on the spoon. Who is also eating. You have a guy who's eating someone who's eating. 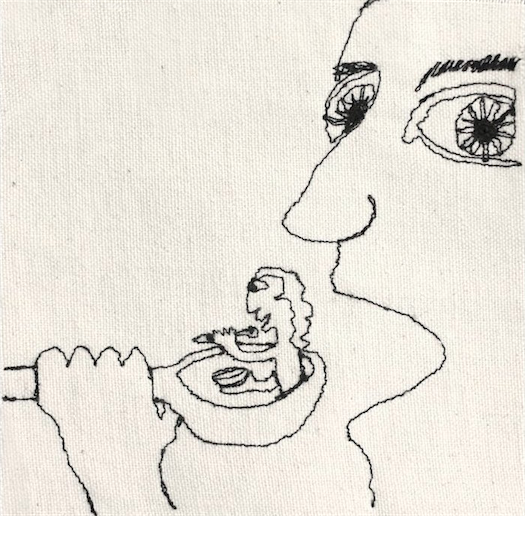 Do you usually break even on tour?
I actually got a grant from the Arizona Commission on the Arts to do an Arizona Sewing Tour. Which was the whole reason I'm even on this sewing tour, across the country. Arizona paid for me to drive around and make free patches for 13 different cities.

Read about the time Paul bought a box truck, and a silver school bus.

You just set up in the city center somewhere and do them for free?
Right. At different art festivals, or different art events throughout Arizona. The last event was in Northwest Arizona, in Kingman. It was 600 miles to San Francisco. The week after that event was Maker Faire, in San Francisco. I'm like, I might as well just go to Maker Faire - it's a phenomenal event. There's a lot of mini ones [around the world]. But the original one is in San Francisco, and then they branched out and did another big one in New York. It's art and science fused together, inventions and all crazy things going on.

Why did you decide to start sewing people's scenarios?
When I had the portable sewing machine I realized I could make custom patches for people. The very first custom patch I did was a camera. This guy wanted me to sew a patch of his $4,000 camera. So I sewed his camera, and then he was like, How much do you want? I said, I don't care, you can give me whatever you feel it's worth. He gave me more than the asking price for any of my patches. Which actually - this is important. Because I've learned, if you're selling art, and you say, Give me whatever you think it's worth, most people will give you more than you expect.

After the camera I decided to do more of the custom patches. But this woman was like, I want a house, with a picket fence, and it needs to be yellow and it needs to have these other things. She got really detailed with what she wanted in her custom patch. I was thinking the entire time, this is a lot of work, this is more of a commission. I realized if I kept it shorter, if I limited people to how many words they could use, then I could be more interpretive, I could be more of an artist, and I could put my own art into it. Thinking of a scenario is something that requires people to be imaginative and put something together. If I ask them for a sentence it might not have a visual image to it.

Have you ever watched Louie?

I love Louie.
Louie C.K. is great. There was one episode - he's at some gig, and there's a famous star, doing a show. Her stand-up.

Joan Rivers?
It was Joan Rivers! And they go into the hotel room afterwards, and they drink and whatever, they talk. But there's a moment where she's like, People who bring happiness to people, it's not just a job, it's a calling. She was really adamant about that. This job that we have, as comedians, it's not a job, it's a calling. That really spoke to me, because I see how every person I make a patch for, it makes them happy. That's what I do. I make people happy, by making my patches. Probably the most satisfaction I get is the fact that I'm making all these other people happy.

Paul Nosa is a sewing artist and musician. Find him at www.pnosa.com. Or, buy his art and download his music free.