Step inside the Baltimore Museum of Art this fall and you could find yourself face to face with a crowd of seven-foot mannequins dressed head to toe in Ku Klux Klan robes.

Of course, they are not your average white hoods. The robes are made from patterns like Kente cloth and camouflage fabric, turning the ghost-like memory of a KKK uniform into a chilling, anachronistic image. Unlike the black-and-white photos of Grand Wizards buried in American history books, these vibrant costumes force the horror of racism in the United States into the present moment. Standing before the imposing statues, you can’t ignore they’re there.

The carefully crafted robes are one piece of a larger installation currently on view, courtesy of conceptual artist Paul Rucker. The multimedia show is titled “Rewind,” an apt name for an installation “about American history repeating itself over and over again.” From Kente cloth Klan robes to reimagined postcards of lynchings to celestial maps that document the proliferation of the American prison industrial complex, Rucker’s show is a jarring look back on the bits of U.S. history that predate acts of contemporary brutality ― for example, the death of Baltimore resident Freddie Gray.

“Rewind” is “my life’s work,” Baltimore-based Rucker told The Huffington Post in a phone interview. He says he’s been documenting police violence and incarceration since April 29, 1992, the day the police officers on trial for the beating of Rodney King were acquitted. That day was also Rucker’s 24th birthday.

Rucker’s first major piece, “Proliferation,” was completed during a residency at the Blue Mountain Center in New York in 2009. He had come across a series of maps that helped illuminate an overwhelming statistic ― that the incarcerated population in the U.S. consists of a staggering 2.3 million people. Rucker transformed this information into a 10-minute video that shows the physical proliferation of prisons across our country. “It’s been viewed 10,000 times,” he said, “which is not as much as a cat playing piano, but I’m happy people are seeing it.”

While much of Rucker's work revolves around the current American prison system, and how it's morphed into a profitable and powerful economy of its own, he's very much invested in the artifacts of the past. He's managed to collect a Confederate $100 bill featuring images of slaves, a copy of a book entitled White Supremacy and Negro Subordination and a copy of the 1860 census. A newspaper that accompanies the "Rewind" exhibition is filled with anecdotes from the 19th century, when slavery reigned as another viable economic system.

For Rucker, the ultimate goal of "Rewind" is to "create a starting point for an informed discussion," one that connects our past to our present. Specifically, one that connects the current reality of incarceration with the former practice of slavery. One piece in particular, "When Black Lives Mattered," consists of a branding iron once used on runaway slaves. "Black lives mattered back then because cotton sales equalled $200 million in 1860 alone. That would be around $5 billion today," Rucker said.

“I have these whistle boxes," he continued, referencing yet another component of his work that brings then and now together. "They’re made from custom speakers. And these boxes whistle every 67 minutes." The sound is meant to mimic the whistle 14-year-old Emmett Till reportedly directed at a white woman named Carolyn Bryant in 1955. Till was eventually murdered by relatives of Bryant, who beat and tortured him before depositing his body in a river. The 67 minutes is meant to represent the time it took the jury to acquit Till's killers.

"These are the things that our parents don’t tell us about," Rucker adds. "A lot of history is not taught in school, because there is shame on all sides. We’re not taught to think as much as we’re taught to be ‘good citizens.’ We’re not taught to ask questions or challenge, because challenging preconceived ideas is hard, especially if it challenges why we have what we have."

We can’t talk about solutions before we talk about the past. We have to ask: How did we get here?

Part of the reason Rucker was intent on including KKK robes in his show is because, in his opinion, there is a lack of Klan artifacts in major institutions, save for places like the Smithsonian. His robes not only stand to remind us of a significant aspect of the American story, but they also serve to reappropriate symbols of historic racism. "If I cannot claim the words and symbols of those who killed and oppressed and make them my own," Rucker explained, "then I will turn them into an object of curiosity at least."

In the past, it's been difficult for the artist to secure funding for his work on issues surrounding incarceration. Rucker is quick to thank the curators and staff at the Baltimore Museum for supporting his provocative work, also noting the importance of the Baker Foundation. Rucker received the Baker Artist Award earlier this year, an accolade that comes with a $25,000 bonus that has helped bring "Rewind" to life.

"I think in order for museums to remain relevant and have a broader reach, it’s important that they reflect what’s going on in the community," Rucker concluded, noting that a Confederate monument still stands across the street from the museum.

"You know, the Freddie Gray trial is happening here, and there’s huge disparity in Baltimore as far as opportunity and selective enforcement of the law. And we’re asking, how can we move forward as a community? For any institution, especially a cultural institution, to remain relevant, they need to able to speak to all of the community. And the Baltimore Museum does a great job."

"Rewind" is on view at the Baltimore Museum of Art until Nov. 15, 2015 as part of the Baker Artist Awards 2014 & 2015 exhibition. Full credits for the various animators and craftsmen who helped bring the multimedia installation together are available here.

View more images from the exhibition below. 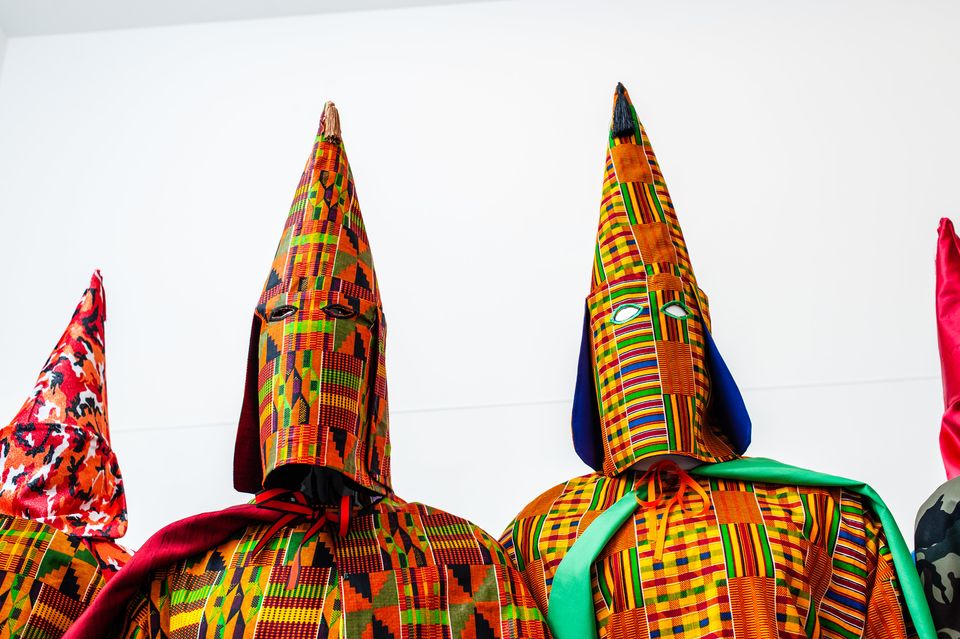