He chose him for his conservative zeal and youthful energy. His reputation as a fiscal whiz. He has intensely opposed Government intervention in the economy -- whether by regulation or subsidy. He will be no mere budget trimmer, but rather a pivotal figure in the effort to restrain the Federal budget, upon which all else depends.

It was in these words that the New York Times described not the political ascendency of Paul Ryan, but rather of his political doppelganger, David Stockman, 30 years ago.

David Stockman was the Paul Ryan of the Reagan era, and the similarities are uncanny. A rising conservative star whose southwestern Michigan district was just across the lake from Ryan's, David Stockman was a 34-year-old Congressman who was famous for his mastery of the arcane details of the Federal budget. When Ronald Reagan selected him to be the Director of the Office of Management and Budget, it was a pivotal appointment, as the central question facing the Reagan Revolution -- from old line Republicans as well as Democrats -- was whether Reagan could cut taxes, increase defense spending and balance the budget, all at once.

Stockman believed that it could be done, or as he said at the time, "The whole thing is premised on faith. On a belief in how the world works."

And the rest is history. The Reagan administration transformed Washington.

Stockman did not succeed in balancing the budget. But unlike revisionist defenders of the Reagan era, he did not blame it on the duplicity of Tip O'Neill and the Democrats, but rather on the perfidy of fellow Republicans. What was birthed in that era was -- in the words of fellow Republican apostate Pete Peterson -- the unholy alliance of tax cutting Republicans and big spending Republicans. Together, they untethered the Grand Old Party from its roots as the party of frugality and prudence, and embraced the singular legacy of the Reagan era -- the realization that balanced budgets were no longer either a political or economic imperative.

And this perfidy lies at the core of Paul Ryan's much vaunted Roadmap for America's Future. For all the claims to being a document of budget wizardry, the Roadmap offers little policy insight beyond its fundamental, and unarguable, stipulation: We cannot continue to borrow forever. Beyond that, the Roadmap offers little more than an assertion of the author's own political imperative -- in this case capping spending at 19 percent of GDP -- and assuming that Congress in future years will agree to curb spending in excess of that cap.

I published the graph below several months ago in a post about the Obama-Boehner negotiations. The graph incidentally makes the same simple point as the Roadmap: "If Federal spending were to be capped at its pre-financial crisis average since the mid-1970s of 20.8 percent of GDP, five categories of spending -- Social Security, Medicare, Medicaid, Defense and Net Interest -- will steadily squeeze out all other areas of entitlement and discretionary spending. By 2022, Everything Else is reduced 57 percent from its historical average of 6.4 percent of GDP to 2.7 percent of GDP." 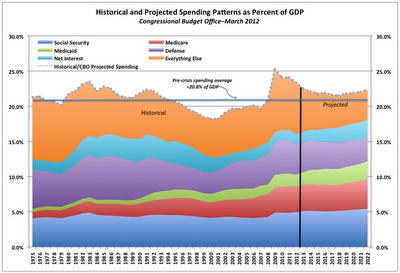 This is not a great insight. It is simply a product of understanding budget numbers at the most rudimentary level and having some facility with Excel. And yet this is the basic insight of Paul Ryan's plan. Ryan does not say what he proposes to cut -- beyond proposed cost shifting of health care costs to beneficiaries -- indeed he barely discusses non-entitlement, non-defense spending. Instead, he simply asserts that if there were a hard spending cap, that would force drastic -- but undefined -- reductions to stay within aggregate spending limits.

But to say what is squeezed out is not a question of budgetary wisdom, but pure politics. Why does Ryan's plan preserve Medicare untouched for those 55 years and older? The answer is not because they paid for it and therefore are entitled to it -- because they didn't pay for it. Medicare is in large measure paid for by general tax revenues just like everything else. It is simply because they vote, and they vote with a greater sense of determination and focus than those who are 35 years old and younger.

Imagine what a roadmap might look like if those aged 18 to 35 had the political clout that their numbers might demand? One could imagine that Pell Grants would be the third rail of politics. Military action as a tool of foreign policy might be viewed with greater skepticism if political power hinged on the votes of those whose lives were to be put in harms way. And Social Security and Medicare would more likely be means tested and subject to spending limits. Perhaps if the young electorate whose wallets were to be raided to pay for it all down the road voted their self-interest with the same ferocity of older voters, we might have less willingness to borrow today to pay for a broad-based welfare state for the elderly. It is all about who shows up on election day.

While conservatives heap adulation upon Ryan as a thinker, David Stockman is not fooled. He understands that Ryan's document demonstrates neither budgetary insight nor political courage. Writing on the op-ed page of the New York Times last week, Stockman assaulted Ryan's plan:

Thirty years of Republican apostasy -- a once grand party's embrace of the welfare state, the warfare state and the Wall Street-coddling bailout state -- have crippled the engines of capitalism and buried us in debt. Mr. Ryan's sonorous campaign rhetoric about shrinking Big Government and giving tax cuts to 'job creators' (read: the top 2 percent) will do nothing to reverse the nation's economic decline and arrest its fiscal collapse...

But the greater hypocrisy is his phony "plan" to solve the entitlements mess by deferring changes to social insurance by at least a decade.

A true agenda to reform the welfare state would require a sweeping, income-based eligibility test, which would reduce or eliminate social insurance benefits for millions of affluent retirees. Without it, there is no math that can avoid giant tax increases or vast new borrowing. Yet the supposedly courageous Ryan plan would not cut one dime over the next decade from the $1.3 trillion-per-year cost of Social Security and Medicare.

The sophistry of the plan rests in the simplistic assumptions it makes about the ability of Congress to designate cuts now for future years, as well as the assumption Republicans are not in fact big supporters of large swaths of the discretionary budget the Ryan presumes to simply assume that Congress will eliminate in future years. Indeed, Ryan's plan does not address how the fundamental question of how the budget would be balanced until the last few pages of his opus, this despite the presumptions that the existential threat to the nation is presumed to be the Roadmap's raison d'etre.

But that is the crux of the budgetary challenge, not a sideshow. What Ryan ultimately offers is nothing more than a repeat of the now decades-old idea of legislating hard spending caps. This is the same approach that failed with the brief experiment with the 1985 Gramm-Rudman-Hollings law. It failed in a different incarnation as Paygo rules. And it has failed again in the form of the 10-year scoring rules that are the reason the Bush tax cuts were supposed to have expired several years ago.

The problem, in its essence, is that Congress does not actually have power to impose cuts on the future, as any rule one Congress makes to control spending, the next Congress can undo. This is the essential dilemma that has underscored our budgetary politics since the political and economic imperative of balanced budgets was overturned in the wake of the Reagan revolution -- only Congress can restrain itself, and if it doesn't want to, it won't.

What Stockman and Peterson understand is that for all of the hubris of conservatives in Congress, they are no different than their political brethren across the political spectrum. In fact, they have proved to be worse. They hold forth on the immorality of deficits and the path to ruin that lies ahead, but it is all just words -- words that mask a deep hypocrisy and cynicism. And when David Stockman looks at the Ryan plan, and the fawning support of the conservative establishment in Washington, he cannot conceal his contempt.

It's rank demagoguery. We should call it for what it is. If these people were all put into a room on penalty of death to come up with how much they could cut, they couldn't come up with $50 billion, when the problem is $1.3 trillion. So, to stand before the public and rub raw this anti-tax sentiment, the Republican Party, as much as it pains me to say this, should be ashamed of themselves.

That about sums it up.