House Speaker Paul Ryan said Donald Trump just earned a mandate, which seems to indicate a landslide victory, something Trump most certainly didn't accomplish. A landslide occurs when you overwhelm your opponent with votes, and even with his Electoral College success, which at most will be 306 to 232, this is hardly the case. 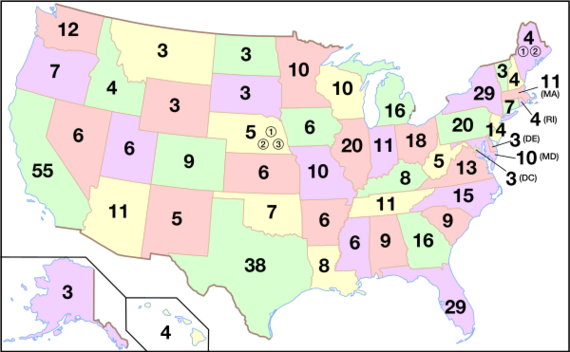 Moreover, a mandate doesn't occur when the loser gets 638,000 more votes (at last count) than the "victor," and Hillary Clinton's superior popular vote keeps growing. Yet, Republicans persist with false comparisons, as in Trump predicting there'd be a Brexit show of support, except Brexit actually garnered more votes than the remain forces. Four percentage points, but, hey, when was the truth ever in their lexicon?

Ultimately, totals don't matter. Whoever gets the keys to 1600 Pennsylvania Avenue has a lot of power, and George W. Bush didn't become moderate even though his ascension was more controversial than Trump's. However, exaggerating their breadth of success, as Ryan claimed, is a public relations ploy to give more license to shaking things up by spreading myths the electorate wanted Trump to make radical changes.

That's why reality checks must be shouted from the mountaintop to put the brakes on potential reversals of social advances, be they health care, women's rights, immigration reform and environmental concerns. Politicians are not stupid and know if they go too far, having achieved the presidency with a minority tally and a reduced majority in the Senate and the House, voters are watching. Sadly, the Senate isn't in danger for the GOP until 2020, because only eight mostly conservative Republican seats are up in 2018, another tragedy of 2016, when so many GOP senators who might have been defeated won re-election with small numbers, like Ron Johnson and Pat Toomey.

Still, Trump's vote-challenged victory provides fodder for Bernie Sanders, Elizabeth Warren and Tim Kaine, all of whom remain in the Senate to refute the big lie (as many Trump pronouncements in the election were) of the electorate's overwhelming love affair with the president-elect. If anything, his amazing feat was how close the election was. Why a man who spewed insults at anyone who opposed him, hurled racist vitriol, had questionable business practices, misogynist tendencies, bragged about not paying taxes, has fraud charges against him did so well is the mystery of this year's contest.

However, even with his election, due to Hillary Clinton's miscalculations, notwithstanding her so-called superior ground game, her much greater campaign war chest, more broadcast ads and a stellar line-up of campaign surrogates, Trump didn't get more votes than she did. Unfortunately, Clinton and her team, who'd warned supporters about waking up November 9 having not done what was needed, are no doubt kicking themselves for taking the rust belt states for granted. A one percent or so difference in Wisconsin and Michigan, plus Pennsylvania and Florida where she campaigned much more, would've provided votes she needed to pull it off. Had she not cockily avoided more time in the Midwest instead of wooing iffy North Carolina, we would probably be addressing President-elect Hillary.

While that might have prevented Hillary's defeat, it wouldn't have taken care of what must be achieved, the abolition of the outmoded Electoral College. After 2000, many thought something would be done, reasoning since there hadn't been a problem in 112 years, previous action hadn't been taken. However, with the huge focus on a Supreme Court decision based on political leanings of the justices, who prevented counting all the votes, one hoped changes were coming.

It wasn't to be, because the Electoral College is protected by small states, whose numbers are needed to provide the 3/4 tally to amend our constitution. In spite of their tiny populations they selfishly hold onto undemocratic power, endorsed by many, left and right (I don't know why), simply because that's the way it's always been. Really? Well, at one time so was slavery, and women couldn't vote. It's a holdover supposedly protecting minority rights, except with the Senate small states still hold lots of power. Plus, if presidential elections are decided by the House, as in 1800 and 1824, each state votes as one, irrespective of their numbers. So, Montana, with one congressman votes with the same weight as California and its 53 representatives.

Why continue these absurd contradictions to democracy? What other modern democracy votes for presidents as we do? We are told it's because urban centers don't have similar interests as huge geographic areas with scant population and that's true, but why should voters in large swatches of underpopulated land have more sway than those in cities?

The president has great powers and influence on our lives, issuing executive orders, vetoing legislation and appointing Supreme Court justices. If a president does something people in rural areas don't like, why should their views be more significant than others? Why should urban centers be stuck with conservative law and court decisions when the president who appointed those justices received fewer votes than his opponent? Yes, someone isn't going to be happy, but, frankly, too bad. And please don't say majority votes might cause tyranny. The same tyranny can be foisted upon the majority with our current system.

The easiest solution is for more states to ratify the National Interstate Popular Vote Compact, which circumvents the Electoral College by having states ignore their own vote if the national popular vote favors another candidate. In order to take effect, states with a combined 270 electoral votes must pass it. At the moment only eleven have, with 165 votes. Thus, others are needed with a combined 105 votes, and then the people's intentions will be heard.

In this case it would have been Hillary, and that wouldn't have pleased Trump supporters, but in other years it might go the other way. Consider though, in the five times the Electoral College or House of Representatives elected presidents with fewer popular votes, it’s always been a Democrat who lost: Andrew Jackson in 1824, Samuel Tilden in 1876, Grover Cleveland in 1888, Al Gore in 2000 and now Hillary.

This isn't democracy, and it's time we demanded change.