Americans' initial reaction to Paul Ryan is decidedly lukewarm, with more rating his selection as vice president negatively than positively, according to a USA Today/Gallup poll taken after the announcement.

Ryan's ratings were less positive than those for any other vice presidential pick part of Gallup since 2000, including Sarah Palin, Joe Biden and Dick Cheney. The only other recent vice presidential selection to gain net negative ratings was Dan Quayle in 1988. 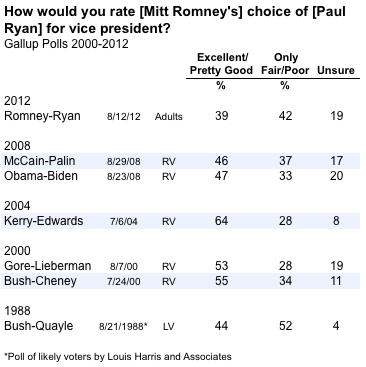 Ryan was rated as an "excellent" or "pretty good" selection by 39 percent of Americans, and an "only fair" or "poor" selection by 42 percent. Just 17 percent said the pick made them more likely to vote for Romney, continuing a trend of vice presidential selections that don't immediately have much effect on presidential races.

A plurality -- 48 percent -- believed Ryan is qualified to take over as president, while 29 percent did not.

Neil Newhouse, a pollster for the Romney campaign, told USA Today in a statement that the poll showed Ryan wasn't yet a household name.

Sarah Palin, who was also mostly unknown when John McCain chose her for vice president in 2008, was considered an "excellent" or "pretty good" pick by 46 percent of voters and "only fair" or "poor" by 37 percent. Joe Biden had similar ratings, with voters split 47 percent to 33 percent.

Democrats hope to define Ryan on the basis of his controversial budget plan, which they believe will be unpopular with voters.

Unlike USA Today/Gallup's past polling on reactions to vice presidential choices, this one surveyed all adults, as opposed to only those who are registered voters, which could cause it to lean slightly more Democratic.

The survey was conducted Aug. 12, using live telephone interviews of 1,006 adults. It had a 4 percent margin of error.

Another poll, conducted by ABC News/Washington Post, found Americans split about evenly in their opinions of Ryan, with 38 percent viewing his selection positively and 33 percent negatively.

A majority of Republicans reacted favorably, while independents were divided 39 percent favorable to 28 percent unfavorable. The survey included 522 live interviews conducted on the weekend after Ryan's selection and had a 5.5 percent margin of error.

CORRECTION: The table originally transposed the number of adults rating the selection of Ryan as positive or negative. It has been updated to correct the error.

1 / 37
Marco Rubio
"Throughout his life, Mitt Romney has made great decisions, and choosing Paul Ryan as his running mate is a truly inspired choice. I got to know Paul during my Senate campaign when he endorsed me early on when I was still considered a long shot. Paul Ryan is a courageous reformer who understands our nation's challenges, has proposed bold policy solutions to solve them, and has shown the courage to stand up to President Obama and other Washington politicians trying to tear him down. "The Romney-Ryan ticket is going to win in November because it offers the American people visionary leadership to recapture the free enterprise spirit that has empowered countless Americans to build businesses from scratch and live the American dream. I'm excited about the visionary change a Romney-Ryan team will bring to Washington, and I look forward to campaigning
AP