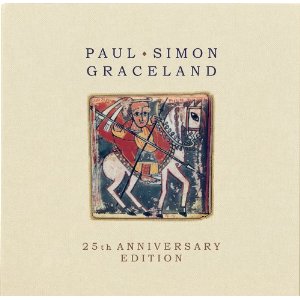 Paul Simon's album Graceland has turned 25 sounding better than ever. Its impact on music and culture is vast and any list of the best albums of all time looks silly if Graceland doesn't appear on it somewhere. The best-selling solo album for an artist who continues to produce great music, Graceland is a landmark, but not one that has grown dusty with Importance. It's not just a "significant" work with historical meaning; it's also an exhilarating collection of songs as timeless and current as ever. This is the second of a four-part series covering the boxed set, its cultural impact, the story of the boycott and the music itself. You can buy the album in any configuration from Paul Simon's website or any major outlet.

Part One: The Boxed Set Review

Graceland forever changed the game when it came to raising the visibility of world music. It made arguments about the "authenticity" of Western music that incorporated world music rhythms, instruments and sounds seem pointless and silly. And it helped to legitimize sampling once and for all even though it barely qualifies as an album that uses sampling in the way we mean that technique today.

No work of art exists in a vacuum. Obviously, many artists in the West drew inspiration from other cultures just as musicians in other cultures drew inspiration from the West. The Talking Heads, the Beatles and countless others dipped into the well of "world music." Heck, Simon himself had been doing so throughout his career. Also, artists from around the world would occasionally break onto the US pop charts, usually as an "exotic" novelty playing "genuine" folk music or under more traditional terms, like Edith Piaf, a French singer people could easily grasp. Record stores in major cities had world music sections. People listened to the music but it often had an aura of nobleness or academia.

Graceland changed all of that for good. The world music sections of record stores exploded in size. Artists who had always championed acts from around the world were able to redouble their efforts. Peter Gabriel and David Byrne launched record labels to do just that. If you were like me, once you became obsessed with Graceland and the music on it, you wanted to hear more. I ran out and bought The Indestructible Beat Of Soweto, Vol. 1, the first in a terrific series that is still an excellent introduction to the music of South Africa. It wasn't an education, however; it was fun. However raw or "exotic" the rhythms or instrumentation may sound, this was pop music. What matters is not how "genuine" music is but simply how good it is. Our ears would soon be opened to everything from Peruvian rock bands inspired by psychedelia to Bulgarian women's choirs that did indeed sound like a thousand year old tradition. Here's the second track on The Indestructible Beat Of Soweto, featuring Nelcy Seibe singing "Holotelani."

The album had no liner notes to speak of so I had only the vaguest idea that she was singing a daughter-in-law's praise song for a wedding, celebrating the cattle being given as a dowry, the bridegroom entering and the new in-laws that must be shown respect. Later I would learn this was a South African urban pop style known as mbaqanga. Sure it had roots in traditional folk music but it also mixed in jazz, blues, r&b from the United States and more. The people performing with Simon weren't the hottest acts in South Africa at the time, really. Paul Simon had discovered a rich vein of music that had fallen a bit out of favor. According to Under African Skies, the documentary about the making of Graceland, many of the acts he worked with were passe in their country; most of the hot bands in South Africa were heavily into the funk music of George Clinton. All I knew for certain was that the entire compilation was compulsively listenable.

People who accused Paul Simon of being a colonialist who crudely "stole" or perverted authentic music failed to understand that the artists he collaborated with were creating pop music themselves. Their music was inspired by Motown and Stax and a thousand other strands of popular music. If you live in Paris and don't speak English, why then of course Bob Dylan is world music to you. Byrne's label, Luaka Bop, reportedly took special care with its album cover art to make certain it was as modern as possible. They didn't want the music they were presenting -- like Brazilian pop on the seminal compilation Brazil Classics 1: Beleza Tropical -- to be seen as musty or anthropological. This wasn't music for scholarly erudition -- or rather not just for scholarly erudition. It was music to dance to, like Jorge Ben's infectious "Umbabarauma." Try not to move while hearing this.

So the album covers Luaka Bop created were sexy and fun. Just like the music. When these artists were interviewed, their diverse range of influences made a mockery of the idea of purity. This growing awareness of music's journey around the world, how musical ideas leapfrogged from Africa to Cuba to New Orleans to New York to Paris and on and on freed up fans the way artists had always been free, to listen with open ears to anything from anywhere and not be worried about taking ideas and sounds anywhere it could be found. Vampire Weekend? College preppies who took inspiration from the rhythms and sound of Soweto township jive? Why not?

While the documentary film's claim Simon launched hip-hop and sampling is far-fetched, he was an important influence. Simon was sampling the hard way. When he heard a track he liked, he didn't digitally sample it and manipulate the music to create something new. He invited the artist into the studio to perform that track again and rework and refashion it into something wholly new.

Graceland contains more songwriting credits for other artists than any other album in Simon's career. It was a true collaboration and not "sampling" in the sense we understand it today. But it did help to legitimize it artistically. No one could deny the brilliance of the music or the fact that it was unquestionably a Paul Simon album with Paul Simon songs. That voice and those lyrics are inimitable. But his approach to songwriting was radically new for Simon. He began with the rhythm and musical track and then wrote the lyrics later, often reshaping the tune along the way. It would define his approach to music for the next two decades.

Was he "cheating?" On Rhythm of the Saints, the opening track "The Obvious Child" begins with thunderous drumming Simon heard and recorded on the streets while traveling through Central and South America. He didn't write that drum pattern and the people who were jamming don't get songwriting credit, though they are credited as musicians on the album and did get financial recompense. Let's remember what a radically new idea this was for recorded popular music. Simon heard something, recorded it, fiddled and expanded it and made the result the very tiny kernel of a song only he could have created. He credited the musicians and paid them. But can you "steal" a drum sound you hear on the streets or sample it from an old album and loop it and claim to have created something new? Yes, of course you can. And before recorded music that's exactly how "authentic" folk music worked. People heard a song and learned it and maybe fiddled with the lyrics or melody and then passed it down to someone else. The good bits survived and the boring bits fell by the wayside.

Sampling isn't inherently artistic of course anymore than recording an original song guarantees a good tune. Sometimes it's lame and reductive and depends too much on the original track. Sometimes it's brilliant and fresh. But it's definitely art and as long as sources are acknowledged and properly rewarded when necessary it's all good. Bitter court battles have determined what is legal and how much this or that artist deserves to get paid. But artistically, the idea of "stealing" someone's music by going into a studio and collaborating with them the way Simon did now seems absurd. The idea of "pure" music existing somewhere in the world when we can hear the cross-currents from culture to culture seems absurd, to musicians most of all.

Many artists paved the way, many world music acts toured and became famous long before 1986. But Graceland took world music to another level, turning some of the acts on the album into international superstars, expanding everyone's appreciation for world music, establishing once and for all that music is music, demonstrating anyone can dip into the stream and draw out whatever they need for artistic inspiration, and proving that sampling is just another way of building on what's come before.

Here's Paul Simon's playful video for "You Can Call Me Al," the closest Graceland came to a hit in the US. It originally peaked at #44 in 1986, but was rereleased in early 1987 and went all the way to...#23. Ultimately Graceland sold five million copies in the United States thanks to touring, constant media attention and word of mouth.

Part One: The Boxed Set Review
Tomorrow: Graceland -- The Boycott

Note: Michael Giltz was provided with a free copy of the deluxe boxed set with the understanding that he would be writing a review.