It is tense, disquieting and hilarious every instant. Paul Verhoeven's film Elle features a video game executive who is menaced by her erstwhile rapist and yet not only refuses to tell the police, but returns nightly to her empty, scary huge apartment, stoically undaunted by the likelihood of a masked intruder crashing through the windows once more.

What makes the movie fascinating is that there is something perverse about Michele (the woman played by Isabelle Huppert): her coldness not only towards this menace, but to her eccentric gigolo-porting mother, her disappointment of a son, her lover, her ex, and her psychopathic father who is behind bars, we learn, for a frightening reason. Huppert plays sang-froid with brilliant accuracy. We cannot keep our eyes off her. And we admire her.

Philippe Dijian, the author of the novel Oh..., on which the film is based, noted that his intention in his novel was to feature "a woman who does not obey the codes of society. She tries to be free, to act without being affected by social strictures."

In the film Michele is neither that hero of freedom nor an anti-hero. She just "is".

And something about that stolid "being" is perverse.

Indeed, there is a bit of perversity--or perhaps just "humanness"--about each of the characters: the son who chooses to marry a castrating "crazy" sassy bitch who belittles him in every scene; the lover who betrays his wife with her best friend; perhaps even the devout Catholic woman who walks barefoot to meet the Pope while ignoring her husband's foot-fondling under a table with another woman.

Throughout we laugh out loud.

Dumping a loved one's ashes over a bridge, Michele shrugs and says deadpan: "Yes why not here." She overturns the urn. The ashes flutter in the wind.

This is why it was surprising to me that at the end there are some ambiguous hints of "psychological" evolution in the Isabelle Huppert character: a kinder approach to the son, a more honest approach to her best friend. I would not have expected evolution in this lucid "as is" portrait of unfathomable amoral human nature.

I asked the director Paul Verhoeven to help me out: a question that spurred a vehement response: 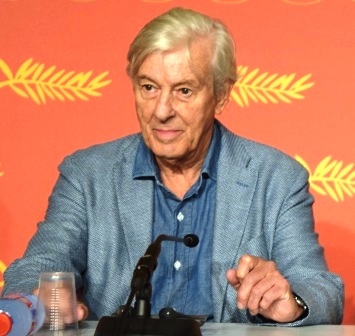 Djian commented that he too had no evolution in his story. His point in the novel was to just have the main character "react to events."

"She does not react in a predictable manner. Many of us really don't know who we are and what we think. We are just confronted with what we have to face without necessarily following solutions. There is no evolution in the book. Yes the mother and son have a moment [of understanding] together. They learned how to listen, to know each other. It is not psychology. It is life that makes you like this."

Earlier Paul Verhoeven had asserted that for him, his film was "a comedy--like Renoir's Rules of the Game--a tragedy and a comedy, with also tension."

It is this tension--and the humorous sangfroid of these characters who are far more "normal", in their oddness, than usual movie characters--that makes Elle, for many critics, a strong contender for the Cannes Palme d'Or.