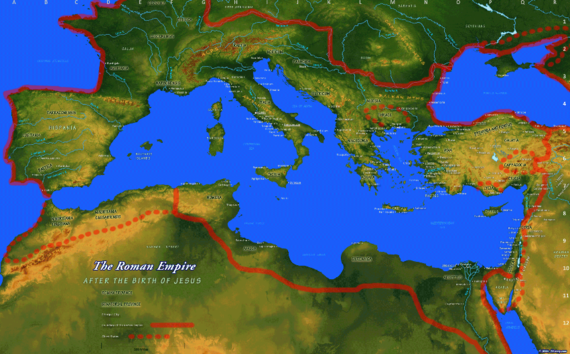 Jerusexit or Jersualexit or Jextit? Could that describe the bitter ethnic factions and eventual break of the early Christian Church from Jerusalem and Judaism. As bible scholar Ben Witherington puts it: "If we were to understand what is happening in the 1st century AD, Paul's way of presenting the true faith in the Jewish Messiah is a vote against keeping the status quo. And according to fellow scholar John Barclay: James's stance was "to keep the boundaries of the nation secure...no mixing of the races...keeping the Jewish tradition undiluted."

Most casual Christians or even those who rely on their understanding of scripture from the pulpit remain in the dark about Christianity's conflict-ridden pre-history. Even seminaries and colleges are cloudy on the issues. The actual on the ground human conflicts and clashes are glossed over and the real story has become solely one of the spiritual. Ignored are the role of the collection, the role of the honor code in Roman society, and Christianity's break from Judaism, which was at heart a conflict of race or in the currently overused term ethnicity. Fear of "the other," did not originate in Britain 2016.

With a canon that reorders the Bible not according to strict chronology, (i.e Paul's letters before the Gospels and Acts), but for purposes of theology, it made the best case to a Roman audience that the early Church was a seamless transition from God to Jesus to the Apostles including Paul and then to the whole world. In fact, Christianity might have been dead on arrival had the assassination attempt on Paul's life as he delivered the collection succeeded.

Traditionally these conflicts have been dismissed in two ways: 1) to say that the issues were merely quibbles over theological pointers, such as the nature of Jesus as Messiah, the Resurrection, the end times etc, issues that would make for academic debate, and 2) the issues were of a ceremonial or ritualistic nature, how you lighted a candle, the meat you ate, and who you ate with or the nature of circumcision and who was circumcised or not.

On the first point, we must not forget that these ancient cultures,in particular Judaism, like modern Islam, did not believe in separation of church and state. As a matter of fact, that concept itself would not have even been understood. A Jewish Messiah was not just a King of the Church but a King of the Political World. The Kingdom of God like a Caliphate meant earthly rule, so theological issues were political issues. Of course, in ancient times Judaism was defending its borders of belief from outsiders; today Britain and the president elect of the U.S. are trying to shield their countries from Muslims they consider dangerous to their way of life.

As for the rituals being benign, that would be true if the rituals were symbolic in nature and not the reality, the symbol of bread of the sacrament but not really the Christ inside. The physical manifestation of the teaching without the sacred truth or miracle. But even this distinction misses the gravity of the point. Circumcision seen at a public pool and not eating meat from pagan sacrifices served also as ethnic boundary markers. Public meetings in which cultures mixed served as lines not to be crossed. The ethnic group could be identified and kept undefiled.

Enter Paul's collection and the Jerusalem Council. When these issues and conflicts surfaced tin the early movement, there were no simple solutions. Most Jews believed that the embrace of Gentiles as God's final outreach to a world that was coming to an end was acceptable, but not as ongoing Church policy. Only a Jew could properly worship the God of Israel. Paul, after his encounter with Jesus, had a different idea and proclaimed that these Jewish followers of Jesus including his brother James were missing the real mission. That he alone was told by Jesus that a new day was coming without these older, divisive categories of Jew and Greek.

Paul was trying to get the collection deal done, but as long as the Jews did not cooperate, Paul had no ability to raise funds across state lines, raising funds would have been a crime if not linked to the Jewish faith. Israel had the only exception because of the money brought as part of the Temple tax in yearly pilgrimages to Jerusalem. So he agreed with James to a compromise (Galations 2:10), a collection from Gentiles given to the Jews as support for the poor but also as a symbol of unity. Paul's final mission, to deliver the collection in AD 58, would see if in the end if the art of compromise worked.

James did not accept the offering. Instead he informed Paul that his brethren were furious with his new message, because it sold the Greco Roman world "Moses light" and that he should consider taking his money and donating it to other Jews willing to take a Nazarite vows, as one scholar put it, to "legitimize the funds." Paul reached the Temple to discover there was a coup waiting for him and was mobbed ; he would have been killed had he not been bailed out by the Roman Army when he proclaimed his Roman Citizenship.

Like Edward Snowden, after backing up his message that powerful forces of his world could be brought to account, Paul spent the remainder of his days in the court of public opinions. On one side were Jewish authorities with their corrupt legal entities and assassins sworn to kill Paul if given a moment of daylight. On the other side, corrupt politicians, one admittedly hoping to receive a bribe from Paul for his release, and Nero's Roman army obligated to escort him from Jerusalem, to Caeserea where there was a Roman base and then on to Rome, where he would stand before Caesar. Had Paul not been kept safe, it could have turned into a scandal of Benghazi-like proportions.

At the center of the young Christian movement was an issue of race, who is in and who is out? Can you be a Christian believer and not be an ethnic Jew. Well , Paul would say of course, Jesus has shown me this fact in a vision. James and his followers saying in the end and an adamant no. Paul had come to represent "the other." John Barclay reinforces this point: Paul's position is that in the death and resurrection of Christ, the ethnic distinction between Jew and Gentile was broken down, that they were united in one community. That was very radical to very threatening to someone like James."

In light of Brexit and the U.S. Election, have things truly changed? All those millennia ago, could the Jews be called racists in wanting to defend their people and rich heritage from outsiders? Could Paul be called a dangerous globalist in wanting to unite the world through his message of harmony and solidarity in Christ? The questions unanswered then remain our questions today: what is the fair point at which individual and national identity should be sacrificed for the global aspirations off the world. Unfortunately, this discussion has just begun, so we can expect more violence and Brexits.