For the new movie Pompeii, which opens today, Feb. 21, the filmmakers did their best to accurately portray what producer and director Paul W. S. Anderson calls "probably the most spectacular disaster of the ancient world." I talked with Anderson about the ways he incorporated history and science in order to make the movie as accurate as possible. 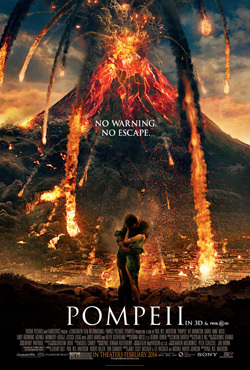 Alejandro Rojas: It is surprising that there hasn't been a big Pompeii movie done before. Why do you think that is?

Paul W. S. Anderson: We have tried to be historically accurate within the contexts of making a fictional story. We have also tried to be historically accurate when it comes to the destruction reaped on Pompeii. I think the technology has only recently existed to be able to put that on screen in the way that we have done. This really is the type of movie that 3D was designed for, so the whole new wave of 3D technology that I have been working with the last five years has really allowed us to portray Pompeii in a much better way than I think it could have been done 10 or 15 years ago.

Rojas: What research did you rely on for accuracy when it came to what the city looked like and what really happened?

Anderson: We used old research. We relied on the letters of Pliny the Younger, who wrote very eloquently on what happened in Pompeii. What he wrote was so fantastical that his writings were discredited for quite a while because the Romans didn't really understand what a volcano was. It is only as we have come to know what volcanoes do, and the kind of effects they have, that people have realized that he was writing about real events.

In terms of what the volcano specifically does, all of that is based on a lot of photographs of real volcanic eruptions that have occurred in the last 10 years. There has been a pretty big spike in volcanic activity over the last decade, and a lot of that has been captured on film. That is what we have based a lot of our [volcano] research on: a lot of footage of the volcano that exploded in Iceland recently, and a lot of the volcanic activity that has occurred in Japan, for example.

One of the things I have never seen portrayed with a volcano was all the lightning within the ash cloud, which looks magnificent and very terrifying. That's all based on real photography that occurred in Iceland. When we were doing the visual effects for the movie, we would have what we were doing up on the screen, and right beside it we would have real photography of actual events, and I would always be pushing the animators to match the reality of the image as much as possible.

Rojas: Were there other technologies employed to be sure you got the look of the city correct and the unfolding events accurate?

Then, with the volcano, what we were doing as a visual effect was adding the top 2,000 feet of the volcano. When you look at Vesuvius now, what you see looks like two jagged twin peaks. It was originally a classic cone shape, but that blew off during the eruption.

Rojas: Many people are familiar with what happened in Pompeii, but do you think audiences will walk away from your movie having learned something new?

Anderson: I think when people think of Pompeii, they think it was just destroyed by the volcano. Yes, it was the eruption of the volcano that eventually caused the pyroclastic surge that swept over Pompeii and destroyed it for good. But also, they had to face the effects of a very extreme earthquake and a tidal wave that swept in from the Bay of Naples. So really the movie is kind of like three movies in one. It is not just a volcano movie; it is also an earthquake movie and a tidal-wave film. I think we are going to give people a front-row seat to probably the most spectacular disaster of the ancient world.

In terms of the science, we tried to be as accurate as possible. Again, it is not a documentary; it is a movie, so sometimes we have compacted the time period a little bit to keep the intensity. But really, all of the volcanologists and historians we have showed the movie to have given us high marks for both scientific and historical accuracy, which is what we are striving for.

One thing I should mention as well: Although all of the characters in the movie are fictional characters, each character is inspired by one of the famous plaster casts from Pompeii. The African gladiator is a very famous plaster cast. It is based on this man who is cowering in terror. [The main] characters are very much based on the twin figures of the lovers who are probably the most famous of the figures of Pompeii. So they are fictional characters, but they are definitely inspired by reality.

One of the things that struck me when I was a kid and I was learning about Pompeii was these figures that were frozen in the moments of their death. It is very powerful imagery and it is very emotional and very evocative. You can't help but wonder, "Who were these people, and what was their life story?" That was very much the inspiration for this movie.