A Tujunga man accused of stealing a piece of the wrecked red Porsche Carrera GT that Paul Walker and Roger Rodas were in when they died in a fiery crash appears to have posted a photo of the souvenir on Instagram.

Jameson Witty, 18, was arrested outside his home Thursday.

"Piece of Paul Walker's car. Took it off a tow truck at a stop light," Witty captioned the image on his social media account just before 11 p.m. the night of the crash. The photo appears to show the T-top panel from the roof of the car that authorities said he was arrested for allegedly stealing off the bed of a tow truck as it transported the wreckage to a police impound yard for investigation. 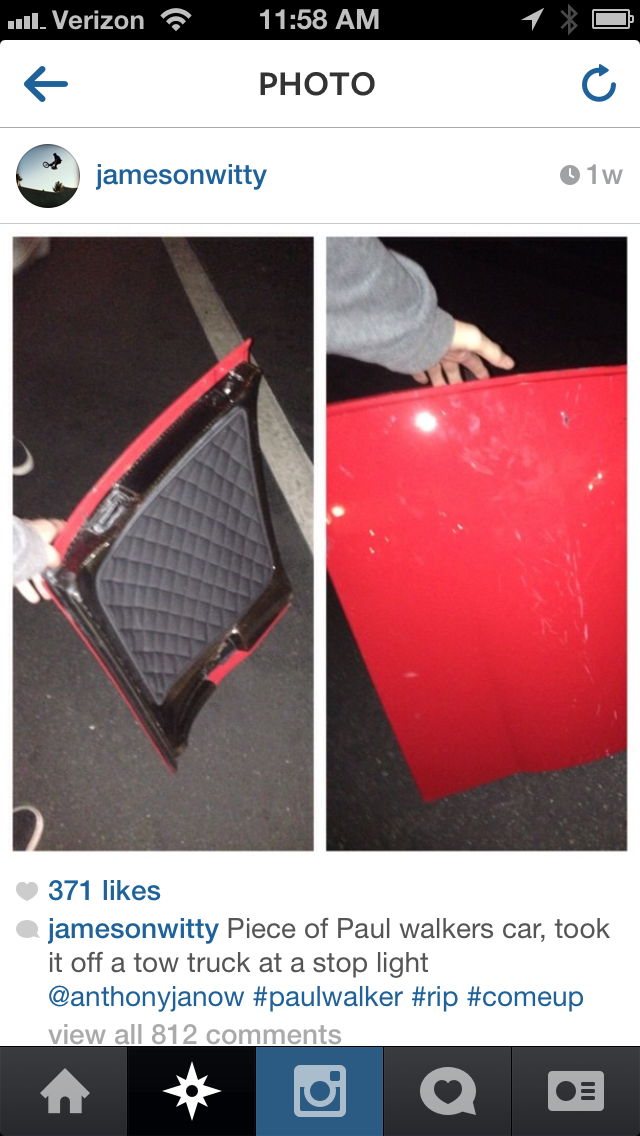 A second unidentified 25-year-old suspect is making arrangements to turn himself in to authorities in the next few days. It remains unclear what role each of the two men played in the theft.

On Instagram, Witty identified himself as a Paul Walker fan and previous images show he is involved in planning a memorial event for car enthusiast fans of Paul Walker later in this month.

While other fans, and even Walker's friend and "Fast and Furious" co-star Tyrese Gibson, had taken fragments left from the car at the crash site, those pieces were no longer considered evidence and had been left behind by detectives.

Witty and his accomplice face charges of evidence tampering along with theft because they stole a piece from the part of the car that was still in police custody pending additional investigation into the crash.

The remains of the high-performance car were towed away from the Valencia crash scene around 10 p.m. Saturday, and police say several cars followed the tow truck as it transported the wreckage to the impound yard for additional investigation. While the flatbed tow truck was stopped at a red light at McBean Parkway and Newhall Ranch Road, a man allegedly took the roof panel from the wreckage.

Witty remains in custody at the Santa Clarita Valley Sheriff's Station in lieu of $20,000 bail, according to sheriff's records.

Walker, an actor and star of the "Fast and Furious" franchise, was a passenger in the rare Porsche driven by financial adviser and part-time race car driver Rodas when it collided with a light pole and tree before exploding, killing both men.

Officials have said speed appears to be a factor, but the investigation into the cause of the crash remains ongoing.

Fans have flocked to the site of the crash, on Hercules Street near Kelly Johnson Parkway, since word of the actor's death spread early Saturday evening. There is a growing sea of flowers, cards and candles for the two men, and deputies have been regularly stationed near the site since the crash.

Warnings have been issued that cars parked illegally will be ticketed and that traffic laws will be strictly enforced after some fans began speeding past the site in homage to Walker's fast-driving character Brian O'Conner in the movie series.

Fans have planned a public memorial at the site for Sunday at noon that is expected to draw as many as 20,000 cars. ___