Ballantine Books may have been put off enough by Paula Deen's racially insensitive history to cancel the October release of her next cookbook, Paula Deen's New Testament, despite enough receiving pre-orders to briefly make the book the bestselling item on Amazon. But the cancellation hasn't stopped Deen's fans (some, perhaps, brand-new converts to her cult) from snatching up copies of the Savannah chef's other cookbooks in the wake of the scandal. Au contraire!

Sales data provided to The Huffington Post by Nielsen show that sales of Deen's recent cookbooks have exploded since the scandal.

On the week ending June 30, which immediately followed the Food Network's decision to drop Deen from its lineup, Americans bought a total of 2,950 copies of Deen's last nine books at the bookstores participating in Nielsen BookScan, which currently covers approximately 85 percent of the print book market. That's nearly seven times as many copies as were sold in each of three weeks before the National Enquirer unearthed a videotape showing Deen making controversial statements about race. 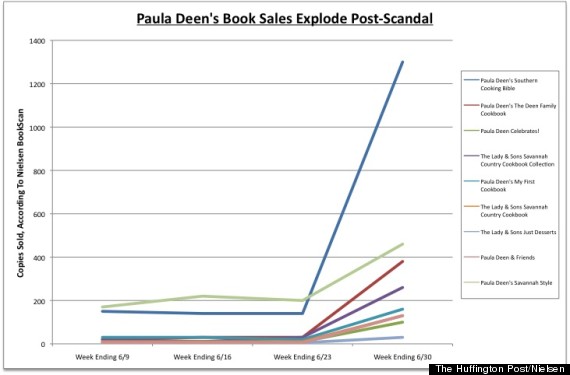 The surge of enthusiasm for Deen's backlist hit different titles differently. Sales of Paula Deen's Savannah Style were up just 233 percent the week ending June 30, compared to the average of three prior weeks, but sales of Paula Deen's The Deen Family Cookbook were up 1,425 percent in that time span.

Nearly half the Deen books sold last week were Paula Deen's Southern Cooking Bible, the chef's most recent, which was published by Simon & Schuster in 2011. Though the book sold 123,000 copies the year it was released, about 150 were sold in each the first three weeks of June. Around 1,300 were sold the week ending June 30.

Sales have been so quick that even Amazon is having a hard time keeping up. The site lists a wait time of one to three weeks for shipment of all the books of Deen's they currently carry.

The royalties generated by the sale of 2,950 books -- even lavish cookbooks -- are surely peanuts compared to all the money Deen lost when she was dropped by the Food Network and all her major corporate sponsors. But if sales continue to be brisk, they could be the seeds of an unlikely comeback for Deen. Anyone who doubts the loyalty of Deen's fans, or the idea that even bad press can be good publicity, is going to have to contend with that chart.