Paula Deen has been busy. The "Queen of Southern Cuisine" just launched a video game in March and now her newest endeavor, a restaurant in Pigeon Forge, Tennessee, will open later this month.

"Paula Deen's Family Kitchen" will start serving customers on Monday, April 27, which is exciting news for butter enthusiasts everywhere. The dining establishment is located near Dolly Parton's Dollywood theme park and right next to Jimmy Buffett's Margaritaville Hotel. Yee-haw, y'all! 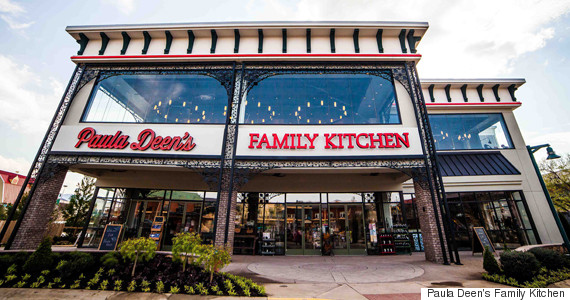 In an email correspondence with The Huffington Post, Deen said her favorite thing on the menu actually consists of multiple items: "Fried chicken, biscuits and fried green tomatoes," she said. "The menu is like your children – it is so hard to pick a favorite!"

But when it comes to the one thing she's most excited about, Deen says it's all about the chicken and waffles.

Check out an exclusive reveal of the new restaurant's menu below. We noticed a few interesting things about it, first and foremost that there's only one salad offering, the "Poppyseed Tossed Salad," and it only comes as a side dish. There are limited options for those who are gluten-free, vegetarian or vegan, and Deen says the healthiest menu items are the fresh vegetables, which are also offered as side dishes.

Of course, Deen is known for her buttery, delicious Southern cooking, and most fans won't visit her restaurant looking for something on the leaner side.

We wonder if Deen's new restaurant will appear on the new TV show her sons, Jamie and Bobby, are rumored to be hosting. Eater reports "Southern Fried Road Trip" is underway for Food Network, though the channel has yet to confirm production. So far, the brothers have been spotted filming in Alabama.

Ceramic Pitchers
Sur la Table
A pitcher filled with wildflowers is something you'll find in many country kitchens like Paula's, adding a feeling of home. These ceramic pitchers come in three earth tone colors that have the look and feel of country craftsmanship. Italian Pitchers as SurlaTable.com, $17.99
Deep Fryer
Krups
We all know Paula uses her deep fryer a lot. Hers is inset into the countertop and is easy to access. A countertop deep fryer like this one is a close second. It features a basket to make removal of fried food easier. Krups High Performance Deep Fryer at Williams-Sonoma.com, $299.95
Enamelware Stockpot
Le Creuset
Paula's kitchen features a lot of colorful enamelware, which add a bit of country flair, whimsy and charm. Enamel pots are a great way to add color to your kitchen. They're also very versatile, like this stockpot, which is great for making soups, boiling pasta, and more. Le Creuset Enamel on Steel 8-qt. Stockpot at FoodNetworkStore.com, $54.99
Copper Pots And Pans
Etsy.com
Copper pots and pans decorate Paula's kitchen. They not only add to the country feel, they're also functional. Copper pans are very expensive, so the best place to buy them is from vintage shops or online. Try eBay or Etsy. Copper Saucepans Set of 3 at Etsy.com, $70
Storage Baskets
Overstock.com
Paula's kitchen has baskets for storing firewood, but you don't have to have a kitchen fireplace to make good use of baskets. These lidded storage baskets are a great addition to any kitchen -- they can help you organize or hide what you don't want people to see. Woven Grass Rectangular Lidded Storage Baskets at Overstock.com, $40.99
Cake Stand
Anchor Hocking
Nothing's more welcoming in a country kitchen than a cake waiting to be eaten. And Paula always has a cake recipe to share. This cake stand comes with a dome, which is perfect for keeping the cake covered and away from greedy hands until it's dessert time. The clear glass allows everyone to see the beauty you baked. Anchor Hocking Cake Stand with Dome at Amazon.com, $35.73
Cast Iron Skillet
Lodge Logic
Cast iron cookware lends a country feel to Paula's kitchen. Not only that but many of her recipes recommend cast iron, because it holds heat so well. This skillet is great for cooking up everything from breakfast to dinner. It comes in two sizes, 10 inch or 12 inch. Lodge Cast Iron Skillet at Williams-Sonoma.com, $22.95-$32.95
Brick Backsplash
Vintage Brick Salvage
The warm feel of Paula's kitchen has a lot to do with all the brick on the backsplash and on the fireplace. The look can be recreated with brick tiles, which are made of salvage brick cut into wafer thin slices. Chicago Antique Thin Brick Veneer Tile at BrickSalvage.com, $10 per sq. ft.
WATCH: Paula Deen's Classic Meatloaf Recipe
More:
Taste Paula Deenhplifestyle
Newsletter Sign Up
The best recipes, kitchen tips and genius food facts
Subscribe to HuffPost’s food email.
Successfully Subscribed!
Recipes and more delivered to your inbox!