Paula Deen may have alienated fans and lost sponsors, but she has certainly not lost her spirit, y'all.

She made quite a splash at the South Beach Food and Wine Festival in Miami on Feb. 23, as she addressed a crowd of several hundred fans to say that she's ready to rebuild after her recent racism scandal.

The 67-year-old chef showed that she's still spry by climbing atop Food Network celebrity chef Robert Irvine in order to declare that she was "back in the saddle" after a tumultuous past few months. 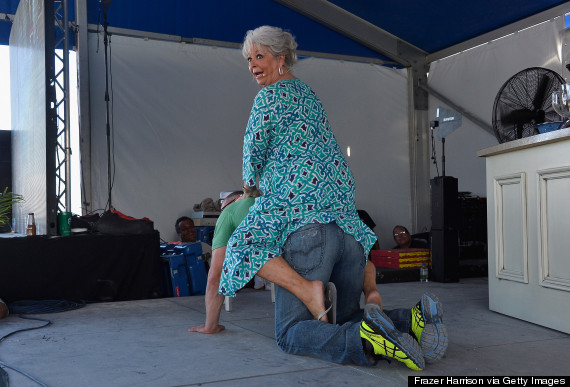 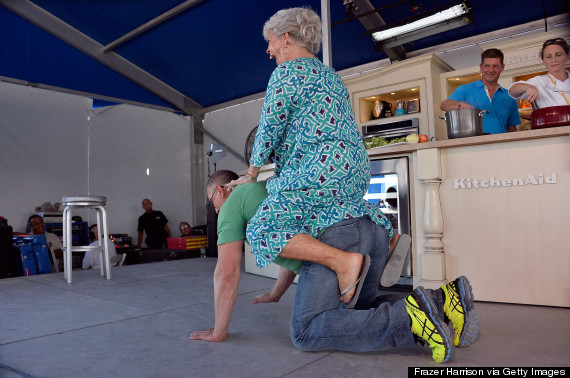 But before you say that Deen's not taking this whole deal seriously, know that she also took the opportunity to apologize for the PR nightmare one more time. She addressed her crowd of loyal followers, saying, "We have come off of a very hard summer my family and I, my team, my partners. But you know, I have heard on more than one occasion ... that I've never apologized. So if anybody did not hear me apologize, I would like to apologize to those who did not hear me."

Deen declared "I am not a quitter," as she thanked her fans for the cards and letters of support that she has received over the past few months.

She then got some advice on handling controversy from the horse's mouth, so to speak. Her trusty steed, Irvine, called upon his own experience with public scandal, to tell her that its time to move on. "This is a warning to you," he said, "You've apologized. You've eaten crow. You're done. Don't do it anymore. I've been there."

Deen certainly took a massive hit from the scandal, having lost a considerable number of endorsements and deals, but plenty of people have stayed by her side. Private investment firm Najafi Companies is further helping her pick up steam by investing between $75 million and $100 million for her to make a comeback and develop an umbrella company, Paula Deen Ventures.

1 / 23
Morning Of June 19: National Enquirer Reports On Racist Statements
On the heels of Paula Deen's <a href="https://www.huffpost.com/entry/paula-deen-racist-comments-n-word-caught-on-video_n_3467287" target="_blank">finishing butters announcement</a>, the National Enquirer claims that it has obtained video of Paula Deen <a href="https://www.huffpost.com/entry/paula-deen-racist-comments-n-word-caught-on-video_n_3467287" target="_blank">making racist statements</a>.
Getty