Paula Deen, aka "The Queen of Southern Cuisine," just put one of her Savannah, Georgia homes on the market for a whopping $12.5 million. The 14,500-square-foot property was designed with a French Caribbean aesthetic and is so spacious, it's described as a "private resort."

According to Deen's spokesman, the chef's "Riverbend" property is close to Historic Savannah and comes with a 3-bedroom barn, two guest cottages and 5.5 acres of land. 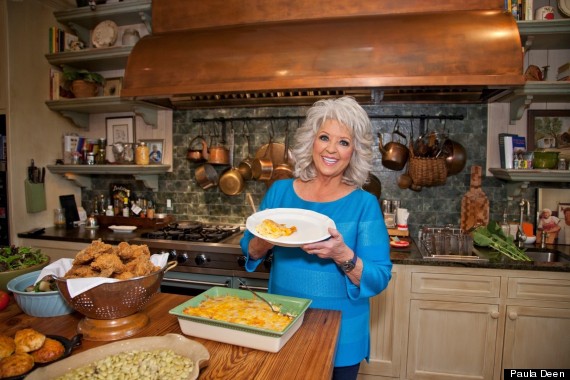 Deen outfitted her house with just about every incredible amenity imaginable, including an ice room with a professional ice machine, a croquet court and salt-water fish tank. And just in case that's not luxurious enough, the property also features a pool and "dive-in" movie theater. The aforementioned barn has an eight-car garage that's large enough to fit two RVs. 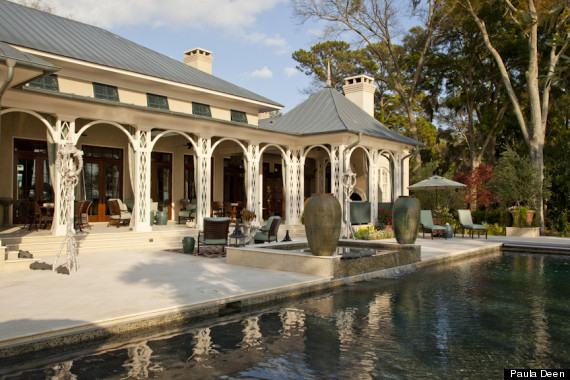 Though Deen owns multiple properties in Savannah, where her restaurant The Lady & Sons is located, her spokesperson cites commitments in Los Angeles, New York City and Minneapolis as reasons behind the sale. Deen plans to keep a smaller main residence in Savannah, but her spokesperson told The Huffington Post that she's eyeing a move to New York City in the near future. See you in the Big Apple, Paula! 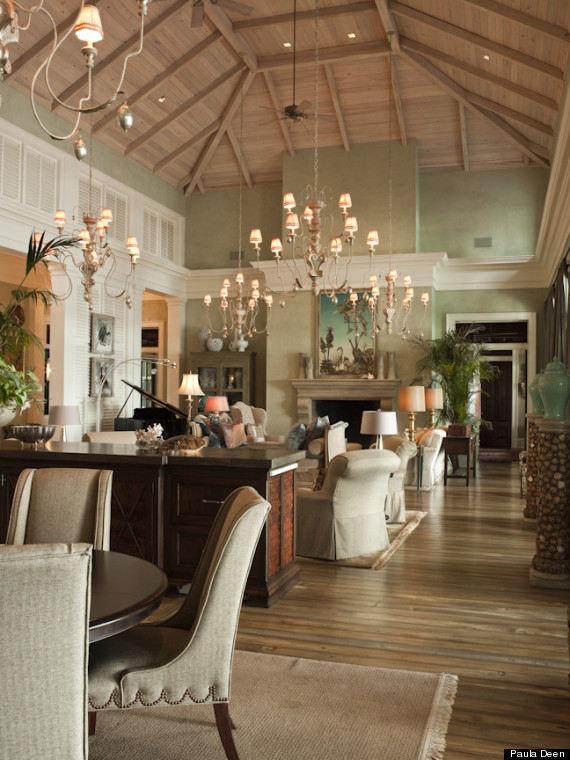 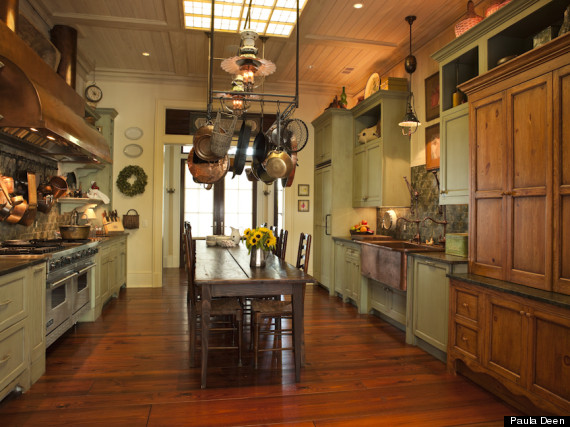 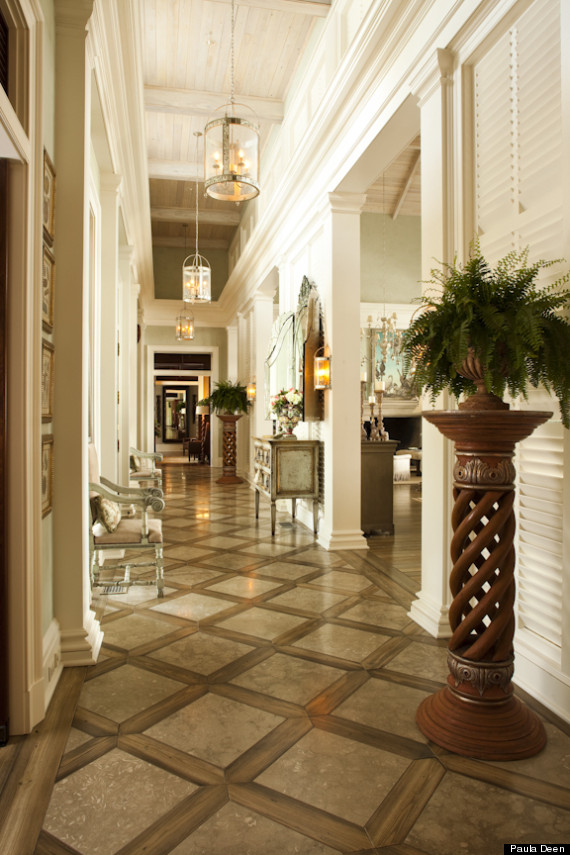 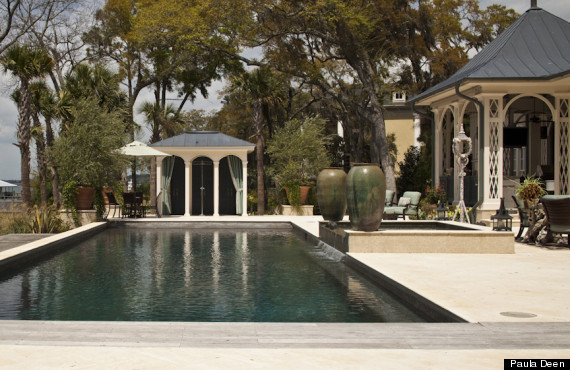 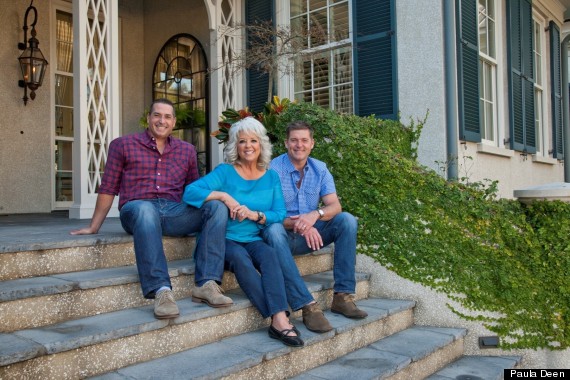 Ceramic Pitchers
Sur la Table
A pitcher filled with wildflowers is something you'll find in many country kitchens like Paula's, adding a feeling of home. These ceramic pitchers come in three earth tone colors that have the look and feel of country craftsmanship. Italian Pitchers as SurlaTable.com, $17.99
Deep Fryer
Krups
We all know Paula uses her deep fryer a lot. Hers is inset into the countertop and is easy to access. A countertop deep fryer like this one is a close second. It features a basket to make removal of fried food easier. Krups High Performance Deep Fryer at Williams-Sonoma.com, $299.95
Enamelware Stockpot
Le Creuset
Paula's kitchen features a lot of colorful enamelware, which add a bit of country flair, whimsy and charm. Enamel pots are a great way to add color to your kitchen. They're also very versatile, like this stockpot, which is great for making soups, boiling pasta, and more. Le Creuset Enamel on Steel 8-qt. Stockpot at FoodNetworkStore.com, $54.99
Copper Pots And Pans
Etsy.com
Copper pots and pans decorate Paula's kitchen. They not only add to the country feel, they're also functional. Copper pans are very expensive, so the best place to buy them is from vintage shops or online. Try eBay or Etsy. Copper Saucepans Set of 3 at Etsy.com, $70
Storage Baskets
Overstock.com
Paula's kitchen has baskets for storing firewood, but you don't have to have a kitchen fireplace to make good use of baskets. These lidded storage baskets are a great addition to any kitchen -- they can help you organize or hide what you don't want people to see. Woven Grass Rectangular Lidded Storage Baskets at Overstock.com, $40.99
Cake Stand
Anchor Hocking
Nothing's more welcoming in a country kitchen than a cake waiting to be eaten. And Paula always has a cake recipe to share. This cake stand comes with a dome, which is perfect for keeping the cake covered and away from greedy hands until it's dessert time. The clear glass allows everyone to see the beauty you baked. Anchor Hocking Cake Stand with Dome at Amazon.com, $35.73
Cast Iron Skillet
Lodge Logic
Cast iron cookware lends a country feel to Paula's kitchen. Not only that but many of her recipes recommend cast iron, because it holds heat so well. This skillet is great for cooking up everything from breakfast to dinner. It comes in two sizes, 10 inch or 12 inch. Lodge Cast Iron Skillet at Williams-Sonoma.com, $22.95-$32.95
Brick Backsplash
Vintage Brick Salvage
The warm feel of Paula's kitchen has a lot to do with all the brick on the backsplash and on the fireplace. The look can be recreated with brick tiles, which are made of salvage brick cut into wafer thin slices. Chicago Antique Thin Brick Veneer Tile at BrickSalvage.com, $10 per sq. ft.
WATCH: Paula Deen's Classic Meatloaf Recipe
More:
huffpost homePaula Deen
Newsletter Sign Up
An essential daily guide to achieving the good life
Subscribe to our lifestyle email.
Successfully Subscribed!
Realness delivered to your inbox