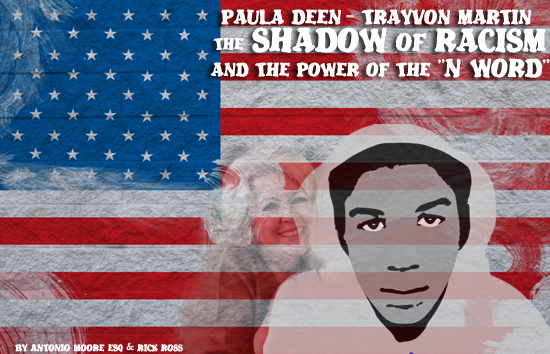 We find ourselves in a time that has illuminated historical cracks the size of the Grand Canyon left in our conscience as a nation. A social conscience fortified by a legacy of human slavery, whites only signs and a drug war gone awry. Last week brought about several race-based decisions from the Supreme Court, one of which struck down a major part of the Voting Rights Act. Setting the stage for what is known as a "come to Jesus" moment in Congress in the coming months, as a divided Congress has a long-needed dialogue on race in this country and its impact, regardless of whether we as a nation elected our first African-American president. Also, the week has brought some of the most stratifying news on the use of the racial slur n****r we have seen nationally in a long while. On one hand we look and see Paula Deen, born in Albany, Georgia in 1947, the perfect gray-haired image of a loving grandma, lost within her image is the context that with her age comes a reality of her actual presence in an era when overt racism was both common, and accepted practice. Her personal actions pointing out directly the necessity for the Voting Rights Act being left intact, due to an ethos of an old South that lingers and many have too quickly tried to forget. Deen's use of the word n****r that has caused outrage, was purportedly to derogatorily describe an African-American robbery suspect.

The controversy surrounding Deen erupted last week when a deposition was released in transcript form in which Deen, who is white, was asked if she had used the "N-word," and responded, "Yes, of course." The "N-word" is a euphemism for "nigger," an epithet for black people.

Epithet defined: a descriptive term (word or phrase) accompanying or occurring in place of a name and having entered common usage.

On the other hand we have a now-deceased African-American teenager named Trayvon Martin, born in Florida in 1995, who by his friend Rachel Jeantel's testimony used the word n***a to describe George Zimmerman when he was being followed. Using the derogatory term as a commonplace describer of a man. An all-too-common use, that incorrectly presents a faux progress that dialogue based out of hate has somehow evolved beyond history. According to Jeantel's testimony under oath Martin specifically said, "the nigga is behind me", when referring to George Zimmerman. In the wake of the teenage Rachel Jeantel's testimony in the Martin Case, we have seen the reality of America's racial views on full display as social media exploded in judgement of her, exposing America's hidden underbelly:

Social-media commentary on Jeantel began nearly as soon as she began to testify. Crass assessments of her weight, looks, and intelligence from some white observers competed with a cocktail of vicarious shame, embarrassment, and disdain from some black ones. If the trial has become a referendum on racial attitudes, Jeantel's testimony served as a reminder that none of us have the moral high ground. Of the abundant ironies that this case has generated, perhaps the most telling are the commonalities that emerged while she was in the courtroom: it brings out the worst in all of us.
--The New Yorker, "Rachel Jeantel on Trial"

The Trayvon Martin case stands to set America on a path toward a needed reality check, that America has not dealt with the shadow of itself made with water hoses in Selma, Alabama, KKK Chapters in North Mississippi or being dragged by a truck to one's death in Texas.
Both Martin' and Deen's uses of the "N-Word" serve as reflective mirrors into this country's cultural psyche, showing the lasting impact of having the type of embedded overt racism that was present for practically the entire history of our country. Is the new normal the same as old normal, justified by an acceptance by a new generation. These uses of the word n****r make it clear a shadow of racism still exists; this comes due to a lack of social honesty about race, and as a result a missing dialogue on racism's real impact economically, socially and beyond. We as a country have hooked onto a nouveau concept of majority and minority division (while important separately), it has led to a dilution of the context of an American history based almost entirely on a black and white racial divide.

To truly understand the needed discussion we must first understand this country's history and the term n****r's place within that history. This context was partially addressed in our prior piece here on the Huffington Post called, "A Discussion of Race, Politics And Slavery":

America is only 236 years old, the Independence of the country was gained in 1776. While in contrast America's African slavery lasted from 1619, to at least the date used by most textbooks 1862. But as can be seen in pieces such as "PBS Slavery by Another Name"(Watch Here) American slavery really lasted until 1942. Through the use of convict leasing and vagrancy laws America kept Blacks subjugated well into the 20th century. It is only in 1942 that government officials made slavery illegal by actually acting to enforce the rights of African American slaves to be free. President Roosevelt signed circular No. 3591 legislation on December 12, 1941, finally, effectively making slavery illegal in the United States in 1942. So in all American slavery was some 320 years long, being that it started before the country's Independence and lasted well into its more modern existence (a full 150 years longer than the entire history of the country). The form of slavery used in America, this country of independence and freedom, was one whereby blacks were intentionally culturally stripped, unable to create familial structure, unable to create financial wealth and unable to create any sense of identity -- stripping men down to a sense of nothingness where in some cases they did not even know their own birth dates.
--A Discussion of Race, Politics And Slavery

The racial slur n****r has a dark history, one deeply intertwined with violence and hatred. That marred past is embedded at the heart of America's history of racism. While some have different specific origins for the word, and explanations for its supposed transition, it can be stated that at least the reality of the ugliness of the word's start is undisputed. As stated by Neal A. Lester, dean of humanities and former chair of the English department at Arizona State University:

We know, at least in the history I've looked at, that the word started off as just a descriptor, "negro," with no value attached to it. ... We know that as early as the 17th century, "negro" evolved to "nigger" as intentionally derogatory, and it has never been able to shed that baggage since then -- even when black people talk about appropriating and reappropriating it. The poison is still there. The word is inextricably linked with violence and brutality on black psyches and derogatory aspersions cast on black bodies. No degree of appropriating can rid it of that bloodsoaked history.
--Straight Talk about the N-Word

In terms of addressing economic disparity resulting from a history of race division, America is akin to a severely ill patient given a sedative (the patient feels ok, but needs treatment). The false belief held is that it is all working itself out through progress, as blacks purportedly are presented with more economic opportunity than ever before. Yet when we look at data we see otherwise; according to data presented by MSNBC's website the Grio, there are roughly 1.4 million American households in the top 1 percent of earners; blacks are a mere 1.4 percent of this group (approx. 19,600 households). To put it in context, there are 40 million blacks in America -- living in 15.4 million households, according to the census; 27.4 percent of all blacks (approx. 12.5 million people) live below the poverty line, making less than 20,000 annually for a family of three. In addition, the site continues, the median worth for the few blacks in the top 1 percent of earners is $1.2 million in assets in net worth. Note: For the large mass of whites in the top 1 percent (approx. 1.3 million households), the median worth is $8.3 million in Assets, with a mere $300,000 in debt.

The question that Trayvon Martin and Paula Deen respectively bring about both racially and historically is, when did America change? If it did change, did it change for everyone? According to the census nearly 76 million of the 306 million Americans are over the age of 55. When massive numbers of baby boomers still living were raised in a Jim Crow America, can we honestly say that the country is ready to move past the Voting Rights Act? When African-American males that look like Trayvon are incarcerated at the highest rate of any group in the history of the modern world, are we really ready for a post racial discussion?

As a result of many factors, one being the War on Drugs African American men today are the most imprisoned group in the history of the modern world. Some 10,000 per 100,000 black men between the ages of 25-30 are in jail or prison. To put this statistic in context, the prison rate for Africans in South Africa during the Apartheid was 836 per 100,000.
--Power of the Name

The contextual contrast of Trayvon and Paula calls upon their age, race and lastly gender and brings to the forefront a question not about a word. Rather it presents a question about a country, and its willingness to be honest with itself about what its foundation is really built upon. Then, once honest, when we find that foundation was constructed with deep realities of racism, the next question is how we as a citizenry can correct these issues by moving toward needed:
1) Honest discussion,
2) Policy changes and
3) Community action.

"I have a dream that my four little children will one day live in a nation where they will not be judged by the color of their skin, but by the content of their character. I have a dream today." Martin Luther King, Jr