Pauly Shore is back at it and, as with his previous mockumentary, Pauly Shore is Dead, still on a quest to see if there's life after the Weasel. In the similarly self-directed Adopted -- which is being released on home video on June 15th -- Pauly follows in the footsteps of Angelina Jolie and Madonna, travelling to South Africa to snag himself one of those highly coveted, third-world orphans. If that doesn't sound to you like a particularly good idea, well, you'd be right: The film puts the comedian on a fast-track to international incident, showing him blundering through the adoption process by, amongst other faux pas, greeting one kid Jacko-style in facemask and rubber gloves, abandoning another on a mountaintop in order to chase after a hot local and, most death-defying of all, baiting the most fearsome of world powers by trying to crash the Oprah school. 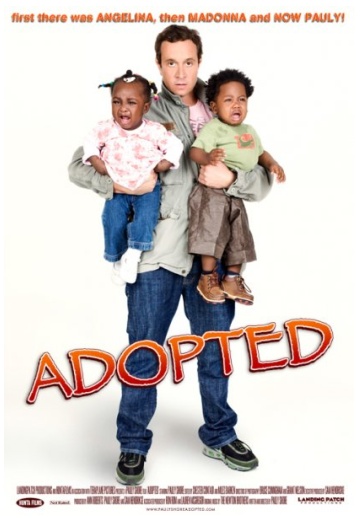 Pauly managed to survive his adventure, though, and unlike his impetuous screen-self was rather more sedate in conversation. Then again, when you have a man-mountain of a body guard stationed outside your hotel room door, maybe acting-out drops down on your list of priorities.

About five hours ago you were over at Howard Stern's show. So I guess everything else today must be a letdown.

No. No, 'cause that was serious.

I think it was. He makes everything funny but, you know, talking about my family is not a funny thing. Do you want to talk about your family?

You see? That's what I mean. Thank god my situation is similar to everyone's situation. Everyone's going through shit with their family, it's just at different levels, you know what I mean?

Jeez, I was expecting that there'd be the six-foot-five models there, with the spanking and all of that. None of that?

Mm-hm. It was a little depressing. It was like In Treatment.

You're now directing your own films. Now, in my scholarly studies of Monty Python...

...one of the things I've learned is that there are two types of comedic filmmakers: one kind embraces the art of film and tries to raise the comedy up to the level of the medium; and the other just treats film as a conduit to deliver the funny. There's a story where Terry Gilliam is taking two hours to line up a shot, and John Cleese is standing off to the side going, "And this will make it funnier, then?"

Which type of filmmaker are you?

The one where you just shoot. I appreciate the directors that like to take the time, because at the end of the day it's about the director's vision, so if his vision is to take his time with the shots and prepare more, and he's successful working that way, you've got to shift as an actor into that world. But for me, I like to have a vision of the piece, but I'm also kind of a Larry David. Larry David has a vision for his show; where it's going to go, the story, but then he lets his actors just kind of go. That's my style.

Yes, of course. Being forty-two years old, not married, no girlfriend, no kids, any guy, or any girl at that age, when they get older, they go, "Shit, when am I going to settle down?" So that's where it kind of spawned from. You know, at the end of the day, the character that I created and adopted, even though I'm playing myself, isn't really me. In the movie I'm playing a guy who's out every night with the girls, and I'm chill with my brothers and my niece and nephew. There are parts of me that are true. But I'm not out every night, and the real me is a guy that goes out to the shvitz and exercises and stays in and watches SportsCenter. The old me was more that, and that's the image that people have of me, so that's the image that I portray in the beginning of the film. But I'm playing a role, it's almost like Pauly Shore Is Dead. I did that film and it stems from the truth, but it's not the truth.

Did you come up with this film because you were already on the road to South Africa?

So how did it come about?

Well, because I'm an opportunist, I like to take advantage of situations that I'm put in. So for me just to fly to South Africa just to do shows, to me that's almost like, "I gotta do a movie when I get there, I gotta do something big." Why just do standup and then come home?

I became very friendly with the promoter of [my stand-up show], who was attached as the producer of the film, and then once I got down there, that's how the concept came about. Once I got in my hotel room and started thinking about what is it that I'm going to do, we came up with the film title -- Adopted -- and it was about celebrities adopting children in Africa. I storyboarded the whole thing in my hotel room, and then we hired a really great production company down in South Africa, and just went off and cast it and location scouted it for a couple of days and organized it.

Was it essentially hit-the-ground running every day?

Yeah, it was, but there was a beginning, a middle, and an end every day. Of course, if you watch the film, there are spontaneous things that happen in the film, and as a director, what was important to me was to create the line of disbelief, like, what's real, what's not real? You can't do a film that's just a documentary of me going around looking for babies, because then it's like after twenty minutes, it's "Okay, there's gotta be a story." So at the end of the day, that's what it was, it was a lot of story and a lot of spontaneous.

And then you're throwing children into this. And I'm presuming that, unlike the narrative that's presented, that the kids are in on the joke.

Yeah, all the kids were actors and stuff. Like a Slumdog kinda thing.

Yeah. Hopefully they don't come after me for money, but hopefully the film will do really well.

Well, the parents were there and it was a nice setting and they had bagels and coffee and fruit and candy. So we didn't work them that hard, plus a lot of the stuff we were doing was fun: Went on the mountain; I washed the kid in the tub, that was funny; there's the safari, we went on the safari. So we just did a lot of fun things that we would do anyway.

You're doing this film, and it's a comedy, but it's about a very serious issue, taking place on a continent where very serious, very dire things are taking place. But here's Pauly Shore, silly, goofy Pauly Shore -- the persona not the person -- running around and having fun. Was there any concern on your part about making light...

...of a serious subject?

Yeah, of course, that's... that's a big concern. But at the end of the day, what I do for a living is I'm a comic. And I'm not saying I'm the best comic out there, I'm not putting myself in that thing, in that world. Someday, hopefully. But at the end of the day, to me, the best comics talk about the things you're not supposed to talk about, and make light of things that aren't light. Adoption is not a funny subject, but if you can make light of it and have people smile about it and make fun of it a little, I think it's kind of cool to bring a little lightness to a dark subject. Not everyone's gonna like what I do; not everyone's gonna like Adopted, some people will be offended about it. Some black people will be offended about it and some black people won't be offended about it, some white people will be offended, some white people won't. I got some black friends who love it.

But if you watch the film, you'll notice that there's never been a film about Africa in the way that this film is, meaning: It actually looks like America. I don't wanna look at the negative part of Africa. You look at the streets of New York, you go to some slums here, it's the same thing. It's all about the media and it's all about what they show. My focus was to take a subject that was serious and make light of it, but also show Africa like a lot of it really is, which is just like America. There's a cable car, there's rock climbing, there's a miniature golf place, there's a nice beach, there's sightseeing, there's beautiful mountains, there's beautiful music, and I focused on that. If you read some of the reviews that I got from some of the South African papers, they were really positive on the film and they thought it was nice that there wasn't another movie about AIDS and death and poverty. It's out there, but I didn't want to focus on it. You know what I mean? I wanted to make it light. And the music is great. If you listen to the music in the movie, it's like great, all-African music. So, you know, it's cool.