Upon seeing the pristine white walls of an established museum, we are all too often struck with the urge to reach out our hand and grasp the forbidden edifice, if only for a brief moment. Thankfully, the day has finally come when the New Museum is letting our wildest fantasies come true. 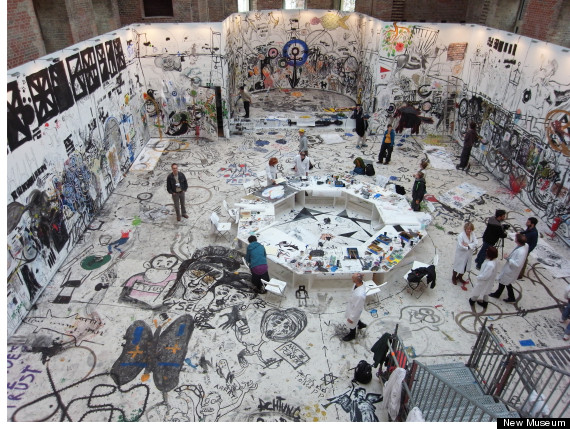 It's all part of Paweł Althamer's upcoming installation, which transforms the entire fourth floor of the New York City art spot into an experimental, participatory whiteboard. The piece, entitled "Draftsmen’s Congress," was originally presented at the 7th Berlin Biennial last year. Over the course of the exhibition viewers become the artists, leaving their mark on the iconic museum's walls.

Althamer describes the piece as a "continuous meeting of people who talk using images instead of words," inviting the masses to spread their thoughts on religion, politics, power and peace. (We're also expecting a heavy dose of obscenities, #YOLOs and crude stick figures.)

"Be polite or politically incorrect, frustrated or outraged, and fight others in an image battle," says the artist. "Picture your love, your hate, your opinions and demands. Spit out the truth and speak out."

Inspired yet? It's a fantastic idea, albeit not one all that different from the laws that govern coffee house bathrooms. Nevertheless, we can't wait to get our hands on those museum walls. Watch out Chris Burden, we're exhibiting next.

The installation is only a segment of Althamer's full exhibition, "The Neighbors," which marks the Polish artist's first museum show in the U.S. It will also feature sculptural workshops, sculptures and videos, including the video series "So-Called Waves and Other Phenomena of the Mind," in which Althamer ingests an assortment of drugs and tracks the journeys of his mind as a result.

Althamer's installation embodies the next stage of relational aesthetics, the ever-popular museum trend which invites viewers to participate in the artworks, and in this case, actually create them. We can't help but wonder what comes next if artists continue to push this envelope. Let us know your thoughts on the effects of this experience-heavy art moment in the comments.

Pawel Althamer's "The Neighbors" will show from February 12 until April 20, 2014 at the New Museum.