Science has yet to formulate a diet version of peanut butter that replicates its rich, creamy texture and profound, nutty taste. The perfect spread is, quite possibly, inimitable.

But there's an ingredient in town that mimics the nut butter's flavor and cuts down its fat and calorie count by more than half: powdered peanut butter. The product, which might intrigue health-conscious consumers, is made by pressing peanuts to remove their fat and oil content, while maintaining their taste. The process turns the solid peanuts into a kind of peanut dust that, when mixed with liquid, reassembles a butter-like spread.

One product in particular has capitalized on the process. PB2, as it's called, boasts "85% less fat, calories" than the average peanut butter spread. A comparative look at the rivaling product's nutritional statistics supports the claim: 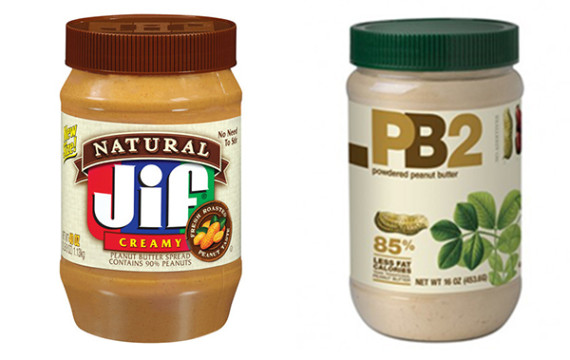 The standalone stats might make you think that peanut butter's powdered version is a dieter's dream. It's true, products like PB2 whack down the calorie count, but as it loses the fat, the the spread becomes depleted of the mighty health benefits of the acclaimed full-fat peanut butter. It's seemingly counter-intuitive, but the full-fat spread can actually promote weight loss and satiety, as Prevention reports. Powdered peanut butter can't necessarily manifest the same benefits.

Still, if you want a lightened-up rendition of your favorite peanut butter dish, powdered versions like PB2 can be a crafty substitution. A note for peanut butter lovers: The product is no match for peanut butter's thick and oily texture. If you're the type to eat a spoonful straight from the jar or spread it on celery, apples and the like, stick to the original.

But, the peanut powder can mimic peanut butter flavor in your smoothies without getting clumpy in the blender blades. It can be added to already-creamy bases -- like yogurt, cereal and milk and puddings -- for a nutty punch. And better yet, peanut flour functions as a white flour substitute in many recipes, which, beyond adding terrific flavor, can transform your favorite cookies into gluten-free versions. Check out these divine PB2 recipes below for some ideas: