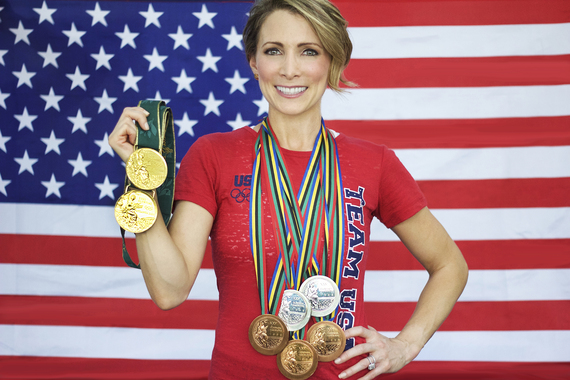 Having been awed by the Olympic feats we've seen so far in Rio de Janeiro, I'm really looking forward to the final days of events. My excitement is further fueled by my recent conversation with America's most decorated Olympic gymnast, Shannon Miller.

While it seems like just yesterday that she was twirling through the air, it's actually been 20 years since she led the "Magnificent Seven" to the United States' first-ever team gold medal. That prize is among her seven Olympic medals.

Miller is in Rio as a gymnastics analyst and as the brand ambassador for Team USA partner Hershey's. When she returns home, her oldest child, 6-year-old Rocco, will be starting first grade, and her 3-year-old daughter, Sterling, will be gearing up for pre-school.

As a mother and a lifelong athlete, Miller is a staunch advocate of physical education in schools. That's why she is part of Champions for America's Future, a national network of sports leaders encouraging public policies that invest in building stronger, healthier kids.

My organization, the American Heart Association, is working toward that, too.

The AHA recommends at least 150 minutes of PE per week in elementary schools, and 225 minutes per week in middle and high schools. Compare that to what you had; you'll probably be surprised to realize how little that is by comparison ... and even more stunned to know that so many kids get even less than that.

The 2016 Shape of the Nation report found that few states have a minimum time requirement for PE and many states allow students to either substitute other activities for PE classes or opt out altogether. The report even showed that some schools use PE as a form of punishment.

Downplaying PE essentially downplays the importance of a healthy lifestyle. This is why the AHA urges lawmakers to include PE in their plans for a fair, equitable and high-quality education, as required by the Every Student Succeeds Act recently passed by Congress. Your voice can help remind our elected leaders that active kids are better learners -- and, just as importantly, they'll be more likely to become healthier adults.

Beyond all the facts and figures, there are intangibles such as PE being fun. Healthy competition is a good thing. So is teamwork. Situations can help build character. And it's all done as part of games. Again, I encourage you to think back to your own PE experiences and recall moments and mentors that helped shape you.

I know that Shannon Miller can fondly tap into those memories, which is why it's my pleasure to turn this spot over to her to continue this important conversation. 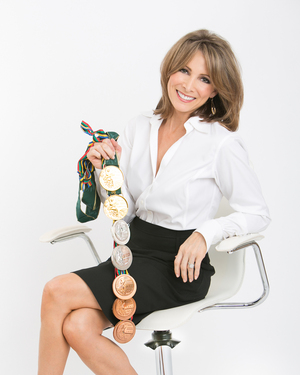 When most of us think back to our days in physical education classes, we remember fun and games. We recall running around with our friends, learning a new sport or getting better at one we already enjoyed.

We also considered it a break in the school day. No homework, no tests to study for; it was play time. Right?

We now know that mindset is only part of the equation. Research shows that the time we spent being active was also an important part of our development, physically and mentally. This is why it is critical that we make PE a priority in the school day.

I joined the quest to encourage schools to place more of an emphasis on PE back in 2007, and I jumped in with both feet.

As a Florida resident, I was honored to be named Co-Chair of the Governor's Council on Physical Fitness for Florida. We worked on an action plan to improve the fitness and nutrition levels of Floridians to combat chronic diseases caused by obesity. Of course, this includes children, and the need for public schools to lead the way.

Another important step was launching the Shannon Miller Foundation to focus on fighting childhood obesity, primarily by encouraging and supporting more physical activity during the school day.

We're all well aware of how sedentary we've become as a nation. We get stuck on our computers or other devices and we're often sitting in the car for hours on end. But the fact sedentary lifestyle has spilled over to our next generation not only breaks my heart, it should give us pause about what the future holds.

We have to get our children active. After all, our bodies were designed to move.

PE classes are obviously a great way to get kids active. And while physical activity is a great way to combat childhood obesity and the host of health issues that arise from this epidemic, the benefits go beyond the physical aspect.

My interest in this area has gone up each year I've been involved. And, I must admit, it's gone up even more since becoming the mother of two.

Our children are at school a vast portion of each day. If they aren't getting exercise during that time, they are not often getting any. For many children, the school day may be their best opportunity to be physically active. It also might be the only way they would get to learn how to play a variety of sports. If a child isn't exposed to a sport, they certainly cannot realize their full potential for that sport.

But the benefits of athletics go far deeper. Kids learn life lessons such as goal-setting, leadership and teamwork. The more they run, jump and throw, the better they get at it. That can lead to better self-esteem and self-confidence, and those positives can flow into all areas of their lives. Watching the Olympics reminds me of what an incredible variety of sports children have to choose from.

And, as it turns out, you don't need a formal PE class to get kids moving.

One of my favorite developments is seeing physical activity spreading into the traditional classroom environment as part of the same lesson plans as reading, writing and arithmetic.

Have you ever heard of "brain breaks" or "fitness breaks?" This is a concept where teachers pause their presentations and have kids get out of their chairs and get moving for a few minutes. It can be as simple as walking around the classroom, dancing, doing yoga or a few jumping jacks. I like to call it working out the wiggles.

Studies show that kids become more attentive, energized and focused, all of which makes them better learners and thus leads to higher grades. There is also evidence that kids who work out their wiggles have fewer disciplinary issues. In short, these breaks check every box on the list of things that educators desire.

Critics may say the time spent on this is borrowed from their educational pursuits. The reality is, these breaks are an investment to ensure that's what taught the rest of that class period truly sinks in. And you can certainly utilize math, science and reading along with physical education. In fact, my father -- a physics professor -- helped me understand how to better stay on a balance beam or gain the most power on a vault through math and physics! I was able to apply fairly high-level principles to an activity that was meaningful to me.

There are many challenges facing today's youth. A greater emphasis on PE won't solve them all, but I strongly believe it helps us down the right path.

If a child finds a love of sport that takes them to the Olympic Games or to a college scholarship, that's fantastic! But the real aim, the most important goal, is creating future generations of healthy Americans.

That's something we can all cheer.