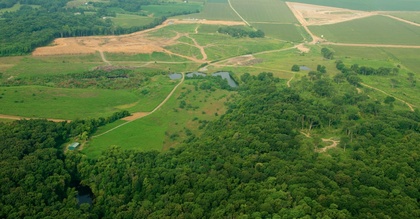 Rocky Branch residents are reporting that decorated Vietnam War-veteran Glenn Kellen, a Rocky Branch resident, has been arrested this morning, as he attempted to move his cross and protest sign closer to the public road. Shawnee Hills and Hollers posted this photo of the arrest to Facebook: 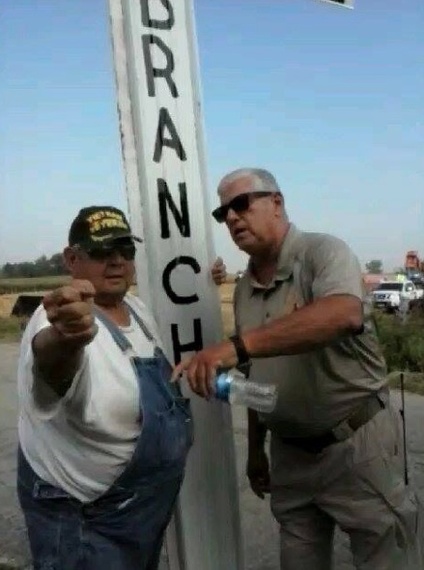 Despite an appeal over the controversial Rocky Branch strip mine permit still pending with an Illinois Department of Natural Resources administrative judge, Peabody Energy defiantly crossed closed public roads and moved massive mining equipment in Saline County yesterday, in preparation to carry out its already violation-ridden and state-subsidized mine operation.

Calling out clear violations of the state's mine permitting process, civil rights and environmental justice policies, besieged farm residents facing toxic mine blasting and water contamination within yards of their homes and wells have appealed to Gov. Pat Quinn and Attorney General Lisa Madigan to halt the state's flawed mine permit process.

"I feel the Attorney General has abandoned us by dragging her feet and letting Peabody destroy a community," Rocky Branch resident Jennifer Dumbris said. "She has the power to stop what is going on until investigations are through but seems to rather look the other way, while Peabody is conducting business as usual."

Last spring, thousands of Illinois residents appealed to Madigan to investigate the numerous inconsistencies and permit violations in the Rocky Branch mine process. Where does the AG stand now?

On behalf of civil rights and environmental justice in Rocky Branch?

In truth, Peabody was named as a party subject to discovery in a recent law suit over the Prairie State coal-fired plant, "a scheme by Peabody," according to Illinois state residents, "to create a market for its high-sulfur, high-ash coal reserves in Southern Illinois." A UK judge also ruled this week that Peabody's "clean coal" ad campaign is misleading. 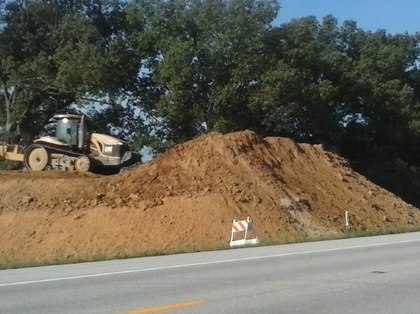 According to the IDNR permit for Rocky Branch, released earlier this spring, toxic coal dust from blasting, which will occur only a few hundred feet from resident homes, farms and wells, is not even considered:

If Quinn and Madigan can campaign to reduce carbon emissions from coal-fired plants, why can't they stop the unnecessary and CO2-exploding Peabody mine in Saline County from being loaded onto barges and shipped for dirty coal-fired plants overseas?

"Why is it that electric cigarettes are more important to make a decision on than the health and well being of a community of 70 and 80-year-olds that are law-abiding, tax-paying citizens," Dumbris added. "It is nothing but profit over people."

Yesterday, as equipment trundled across the state highway and down public roads in Saline County, Rocky Branch residents protested and held signs, "God Save Rocky Branch."

That is, until Gov. Quinn, Attorney General Madigan and the courts uphold regulatory laws and fair mining practices, as well as civil rights and environmental justice. 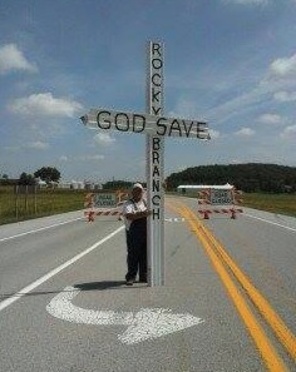 Residents Stand Up to Peabody at EPA Hearing