I spent three years in the Peace Corps, in a remote part of eastern Zambia. There were about 100 people in my village, half of whom were under 16. My house, measuring eight feet by ten, was fashioned from compressed mud bricks. The roof was thatch. I cooked over a fire in an open-aired kitchen a few feet from my front door. (Zambian kitchens are frequently separate in case of fire.) I took a "splash bath" under the stars in a four-by-four grass shelter. I used a pit latrine. My water came from a well. The first three months were impossibly difficult. I didn't know how to start a fire from scratch. I didn't know how to do laundry without a washing machine. I could barely speak the language. I was deployed as a WASHE (Water, Sanitation, Hygiene Education) volunteer. What did I know about building wells or squat toilets?!

I joined the Peace Corps to try something different. I certainly got that.

Simultaneously, and without knowing it, I learned many valuable lessons. When I started, I was a long-haired kid who couldn't manage his way out of a dim room. By the time I left, I had acquired a solar system of management training. Here's some of what I learned...

1.) When starting a project, or meeting a team, don't presume you understand their problems.

One of my first failures as a Peace Corps Volunteer happened early. Fortunately. Some villagers had complained to me that their kids suffered from diarrhea. During training, I learned that most villagers don't wash their hands with soap before eating. This seemed like a place I could have an immediate impact: Teach them about soap! So I encouraged them to to simply use some soap before meals. Immediately, I was peppered with questions --

How do you change centuries of habit? I didn't understand all the reasons they didn't use soap. It was arrogant to assume I knew the solution to their problem. I was embarrassed, and left discouraged. Had I made a mistake joining the Peace Corps? Of course not. But I had learned the lesson of never assuming I was smarter than everyone else... which brings me to Point Number Two.

2.) Surround yourself with people smarter than you -- and don't be ashamed about it.

The next day, I visited a local community development officer named John. I explained to him what happened, and he explained that the problem with that village was far more complicated:

I returned to the village with John. We visited their water source and lamented its "curse." We walked to the scoophole and chased a pig from his afternoon bath. We pointed to the pig and to his filthy feet. We asked if there might be something about his filthy feet making the kids sick. They admitted that maybe there was a relationship there. We asked if they could think of any way they could keep the pigs away from the water.

A few weeks later, we returned to the village. They had assembled a simple fence. The villagers still didn't have money for soap, but at least their water source was relatively clean -- and their kids were healthier.

From then on, I attached myself to John. We made a great team. People wanted to meet me, because as a visiting white man, I was a novelty. I boned up on my hygiene education, and I learned as much about rural construction techniques as I could. I drew an audience and tried to radiate authority. John understood better how villagers lived. We visited many communities, and we learned a lot about wells. I wasn't ashamed that John was better at explaining things. I was proud! He was teaching me valuable cultural information. Meanwhile, I was building his reputation in the community and making it possible for him to continue our work after I returned to the U.S.

3.) Do the hard work with your team, but don't do it for your team.

In more motivated communities, we discussed the idea of digging a well. Digging a well is pretty much what it sounds like: you dig a hole about six feet in diameter... and you just keep digging until you hit water. You usually want to dig in the lowest part of the village. You hope to avoid rocky substrate. You pray the water table is high.

John and I helped organize villages to build wells. We'd even do some digging ourselves, as a show of solidarity. But we never did the work for them -- because if we did that, they wouldn't learn the skills they'd need to care for and maintain their wells after we left. Moreover, they wouldn't feel a sense of ownership in the final product. I knew this, because a non-governmental organization (NGO) had installed hand pumps in select villages a few years prior, and when they broke, the villagers did nothing to repair them. Because they were "the NGO's wells," the Zambians waited for volunteers from that NGO to return to fix them! As you can imagine, they never returned.

Over the next eighteen months, I coached John on how to write grants, and we got enough money to co-sponsor eighteen wells. (For their part, each village was responsible for digging its own well, and collecting enough sand and crushed stones to make concrete; they also had to make ten simple pit latrines. For our part, we bought cement and paid for some technical teams to line the wells with concrete.) At the end of those eighteen months, eighteen villages had new wells (and ten times that many latrines)! Moreover, they felt ownership over those wells and understood how to repair them if there was a problem. Of course, we had also trained two teams of four men each -- subsistence farmers by day -- the important trade of well-lining. They could now freelance as well diggers, and make extra money for their families. Maybe they could even buy soap!

Several months later, while biking to a meeting, a Zambian rode up alongside me and started hammering me with questions. It was hot. I was biking in thick, bike-unfriendly sand. I didn't particularly feel like going to this meeting. He annoyed me. Frustrated, I asked him to stop following so closely. He backed off, but followed me all the way to the meeting.

I finally made it to the meeting, and he entered right behind me. As it turned out, he was a special guest from a faraway community that I had invited, but whom I had never before met. Now, I don't know why he didn't introduce himself to me as were biking -- but he didn't. I was horrified. Fortunately, he acted like he wasn't bothered in the slightest about our earlier interaction, erm, I mean about my being a jerk.

People remember two kinds of people: the jerks and the awesome. Don't let yourself be remembered wrong.

Doing development work in rural Zambia is hard. You can't do much during the rainy season, because people are sowing their fields, and the roads are often washed out. You can't do much during the summer, because people are harvesting their crops. Funerals are common, sadly, and all meetings are cancelled when there's a funeral. Getting angry or frustrated won't make these things change. In the Peace Corps, I called it "rolling with it." As a manager, I refer to it as "pivoting." Things you don't plan on happening, still happen. Roll with it. Or pivot. Or whatever. But relax. It could be worse. You could be getting your drinking water from a poopy scoophole. 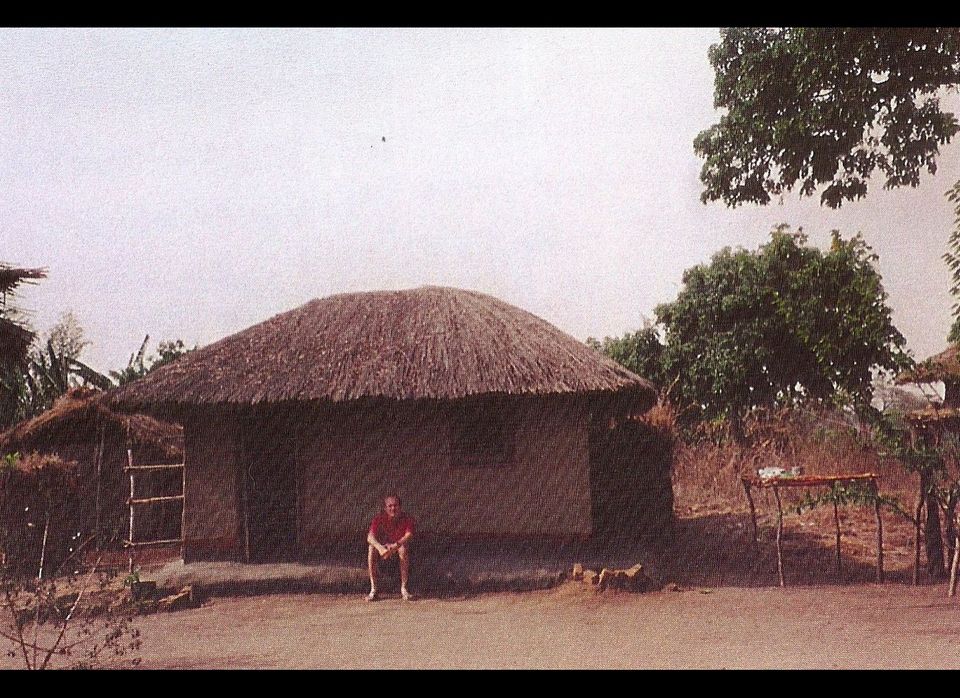 1 / 8
Home sweet home
That's me in front of my home. My dish drying rack is on the right. I'm on the porch of my home. My bath house is on the far left. My latrine is behind that.
Willy Volk