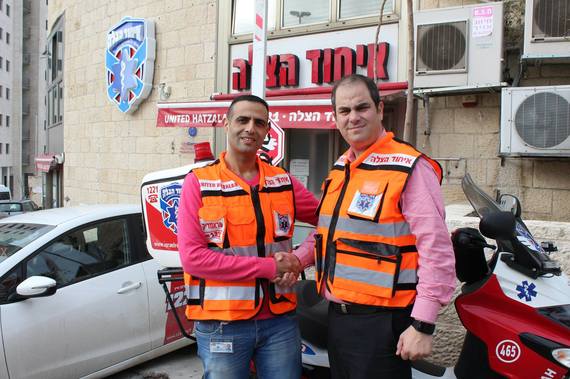 Although this particular story has a sad ending, it nonetheless fills me with great hope for the future. Just recently a paramedic came to me with tears in his eyes. A young patient whose life he saved two years ago had finally succumbed to her injuries. He told me he was heartbroken, as if his own daughter had passed away.

That man was Muawiya Qabha, a Muslim paramedic with the emergency medical services organization I founded 25 years ago, United Hatzalah of Israel. The victim was a two-year-old Jewish girl named Adele from the Israeli town of Yakir in the West Bank.

On March 14, 2013, Muawiya responded to what was described as a "minor rock-throwing incident." Instead he arrived to find a lifeless girl laying on the side of the road. As he rushed to her aid, a passing doctor joined him. Believing she could not be saved, the doctor chose to drive away, leaving the two as a faint image in his rear view mirror. Undeterred, he administered CPR for more than 20 minutes until, against all odds, the girl came back to life. Muawiya remarked that he had never fought so hard to save someone and that the shared experience wound bind the two forever.

At a time when the Middle East is a minefield of socio-religious tensions, such interactions between disparate communities seem especially rare. But when they happen, they can be transformative.

I know that the cure for the ills of the Middle East won't come easily. From the Oslo Accords, to the Camp David Summit to the Annapolis Process, every major effort to bring a resolution to the decades-old conflict between Israelis and Palestinians -- and between Jews and the Arabs more generally -- has failed. Like magnets, we share so much in common, yet seem incapable of coming together.

As a medic for the last 20 years, I've learned a lot about human behavior. Particularly in the context of a life-threatening emergency, the labels by which we define ourselves -- religion, nationality, race, income, gender -- all fade into the background when we're facing death. In the moments after a mother suffers a stroke, a father clutches his chest, or a baby wanders into a pool, panic and fear strip us down to what we really are, not what these labels tell us to be.

So when that helping hand comes from an unexpected source, we're forced to look at them differently.

That's why I was so excited to talk about United Hatzalah at this year's AIPAC Policy Conference, the largest gathering of pro-Israel supporters in the country. AIPAC featured United Hatzalah during its Innovation Showcase, a forum to highlight groundbreaking ideas incubated in Israel but with the power to change the world. In that spirit, I spoke proudly of how United Hatzalah has revolutionized emergency medical first response: We merged the concepts of motorcycles and ambulances to create nimble "ambucycles," created a GPS-based mobile dispatch app, and recruited thousands of volunteer medics throughout Israel. Taken together, these innovations have reduced our average response time to less than three minutes, saving countless lives in the process.

The organization's real value, though, is not just in our ability to save lives, but to also bring them together. United Hatzalah's volunteers are Jewish and Muslim, Christian and Druze, religious and secular. By design, they hail from every segment of the population and serve anyone who needs them -- always free of cost.

Similar to compulsory military service in the Israeli Defense Forces, United Hatzalah's benefits extend far beyond saving lives by making the very act of doing so a shared responsibility. Today, our affiliates operate in six countries with several others on the horizon. Within each of these communities lies unique challenges, but in adopting the United Hatzalah model they uncover new, organic ways to address those difficulties. Put simply, we believe that the selfless act of saving others teaches participants more about themselves, as well as those they may never have known around them.

An Arab volunteer fighting for a little Jewish girl -- it may not broker world peace or cure the Middle East conflict, but it's a good first response.