This past week I spent four glorious freezing cold days in Rome, under blue skies, listening and absorbing wisdom from a few of those "elders" on this planet who truly have something to teach all of us. The gathering at the 8th World Summit of Nobel Peace Laureates included his holiness, the Dalai Lama, Mikhail Gorbachev, Muhammad Yunus, Mainead Corrigan Maguire, Lech Walesa, Betty Williams, members from Amnesty International, the American Friends Service Committee, the International Peace Bureau, the Red Cross and many more individuals, significantly several youth groups from high schools around the world. This last group was the focus as the theme of the summit, "The Next Generation", sought to invite young people to actively participate in building a peaceful world. As Jonathan Granoff, President of the Global Security Institute made clear,

"We are the first generation making ethical decisions that will determine whether we will be the last generation."

The purpose of this year's summit was to create a charter to be presented to the UN, a document which would put forth the wisdom of those who have dedicated their lives to working towards creating a peaceful world. This Charter for a World Without Violence is not utopian, but very realistic. As I read the various points being made in the sections of the charter, it became obvious that all of us, whatever our line of work, financial situation or geographical location, could do something to influence the direction this world is taking. 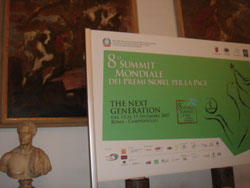 In the glorious Julius Caesar room at the government Campidoglio, overlooking the forum below, two Hollywood actors stood under towering ceilings where a painting of the Madonna and Child, symbols of this Christmas season, looked out over a statue of Caesar, then below that, the panel of Nobel laureates, in all their wisdom. This scene demonstrated visually the interconnected world in which we live, where culture, government, religion and all the world's citizens, remain linked to one another through our common humanity. We must watch out for one another, as the charter states, ".In the knowledge that the most harmed by violence are the weakest and vulnerable".

The summit began by the laureates giving a prize to actors George Clooney and Don Cheadle, as "Men of Peace" for their work in Darfur. Both Clooney and Cheadle implored journalists to write about this subject, keep it in the news. Both these men felt that they did not deserve this prize, but then, one of the Nobel laureates said to them that this was just the beginning, that they would be expected to work harder and do much much more. The prize was in fact a demand from this most honored committee, to ask of these men who happen to be in the public spotlight, to keep going, to never stop working towards the goal of peace. This should be the goal of every one of us on this planet, to, in some small way, leave this world better than we found it.

Nobel laureate, Muhammad Yunus lead the closing session of the summit, during which the first points from the charter were read. Yunus spoke about the youth, and how they had all of the ability through their knowledge and understanding of technology, to accomplish so many things. Yet the youth needed guidance, he said. We adults, parents, fellow humans who have lived on this earth and seen violence and injustice all around us, need to pass on this vision to the youth about how all of the manifestations of human endeavor and creativity can be put towards a common goal of creating a better world. Drawing on his own experience as an activist, and his own generation which believed it could make a difference, Yunus urged all the adults present to communicate to the youth that without some kind of goal or vision, all of the technology and wealth and pleasure meant nothing. There had to be some kind of unifying movement which engages all of us, bringing us together, or this chance would be wasted.

One way to reach the youth is through popular culture and here is how the charter asks that all of us in the world of entertainment address this, "Realizing that the glorification of violence as expressed through some forms of popular culture and mass media contributes to the acceptance of violence as a normal and acceptable condition". The charter begins by stating that human violence is a "preventable disease" and it ends with this universal truth, "Remembering that peace is not only the absence of violence but that it is the presence of justice".

Peace on earth begins, and ends, with each one of us doing our part, whether it is trough acts of forgiveness, bringing to the world's attention injustice in all its forms, or simply teaching our children that they have both the gift and responsibility to help end violence for all generations to come.

To obtain a full copy of the Charter for a World without Violence go to nobelforpeace-summits.org.

In remembrance of the Nobel Peace laureate, Aung San Suu Kyi, being held against her will in Burma.