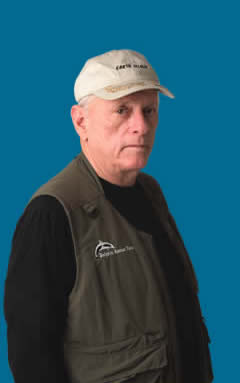 Environmentalists and animal rights activists around the world have been sitting on pins and needles this past week as the annual dolphin hunt that claims more than 20,000 innocent cetacean lives every year kicked off in the coastal village of Taiji, Japan on September 1st. No one is more familiar with the on-going battle to end these senseless slaughters better than Ric O'Barry. The 70-year-old former Flipper trainer turned dolphin activist and star of the recent Academy Award-winning film, The Cove, has been at the forefront of the struggle to put an end to this brutal atrocity for over four decades. Per usual, he is back on the ground campaigning with his team from Save Japan Dolphins, a long standing initiative of Earth Island Institute. However due to escalated threats of violence by right wing extremists groups, this year he finds himself rallying media support in Tokyo, rather than staking out the "little town with a big secret" that has long been the singular focus of his personal mission and life's work.

On September 2, the day after the hunts were set to begin, O'Barry and an international conglomerate of concerned citizens, delivered a petition with over 1.7 million signatures representing 155 nations to the U.S. embassy in Tokyo. "We have come to ask President Obama to get involved in this issue and ask the Japanese government to abolish this annual, anachronistic, brutal slaughter of dolphins," stated O'Barry in a recent press release. The U.S. president is expected to visit Japan in November for an annual summit of Asia-Pacific leaders. 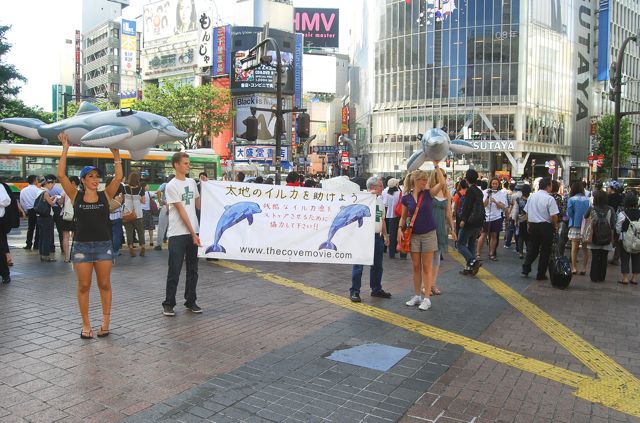 I had both the honor and privilege of working directly in the field with Ric O'Barry back in 2007 during a surfing paddle out ceremony led by Surfers for Cetaceans in conjunction with The Oceanic Preservation Society's covert filming operation of The Cove. Earlier this week, O'Barry candidly shared with me his thoughts on the current happenings in Japan in what he calls a "media blackout of the issue up until now." He states:

We have virtually every media outlet at our disposal and because of that we are reaching millions of people around the world. We have turned up the heat in Japan and turned another corner in getting positive media coverage, thwarting Japan Fisheries Agency efforts to paint us as imperialists and outsiders just bashing Japanese people. Instead, millions of people in Japan are now hearing, most for the first time, about the dolphin slaughter, precisely what the Japan Fisheries Agency has successfully covered up in this country for decades.

While O'Barry and his team had initially intended to head back to the scene of the grueling bloodbath, as evidenced by the undercover footage exposed in The Cove, they decided to cancel that portion of the trip due to heavy threats from right wing pro-whaling groups within Japan. Mark Palmer, director of The Save Japan Dolphins campaign, explained in a recent e-mail correspondence:

We are not here to do confrontations with mobs; we are here to educate the people of Japan and help them overturn really bad government policy on allowing dolphins to be slaughtered and sold in markets despite the dangers of poisoning from mercury contamination. 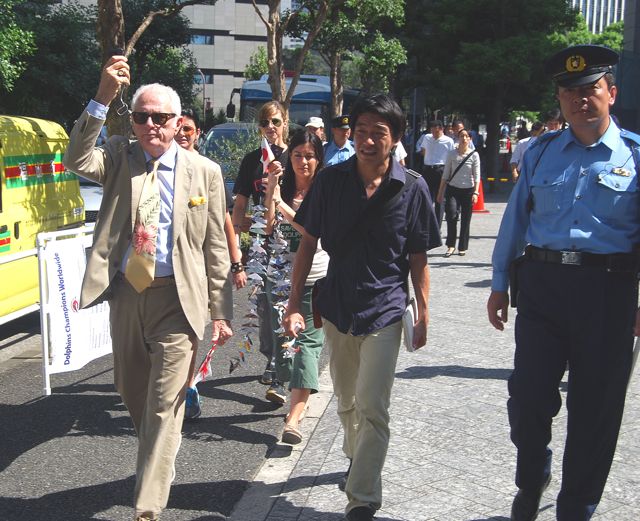 With various conflicting reports flooding in all over social media sites as to the current situation on the ground both in Tokyo and Taiji, O'barry helped to set the record straight. He reported on Saturday:

We have had 14 people on the ground for the last several days in Taiji. It is ghost town there at moment. The only bodies visible are the 11 police officers from Shingu, Kii-Katsuura, and Wakayama City. The right wing militants have abandoned the issue.

Although it has been confirmed that the "hunt" is indeed under way, fishing boats boats returned empty earlier in the week. On Sunday morning, an unidentified activist from the group, Oceanic Defense, stated on their blog site the following information:

For two days now we have traveled to that Cove, and seen nothing, only to be told hours later dolphins are being held there. Yet, when we arrive, they are gone again. It's almost as though the fishermen know our movements before we do. It's frustrating to think we've traveled all this way and can do nothing to stop the bloody slaughter that happens here.

Meanwhile an official from the town of Taiji released a statement to the Associated Press on opening day of the hunt, stating that "I have no idea what the foreigners' intentions are, but there is nothing unusual going on in the town. Our stance remains the same. The town will continue hunting dolphins no matter what they say."

On Thursday, Japanese media reported fishermen in Taiji had captured 20 bottlenose dolphins in the secluded cove as the first catch of the season, however local fisherman would not confirm the reports to the Associated Press. "We don't want to be reported on by foreign media," he said. "This is what we do for a living. We are worn out because of the row over The Cove."

According to director of The Cove, Louie Psihoyos, in a recent personal correspondence:

The mayor of Taiji celebrated the taking of 10 dolphins today. Knowing that the world was watching, the dolphin hunters selected several dolphins for marine parks and set the remaining pod members back into the wild. Last year, those dolphins would have been butchered and much of their poisoned meat sold as 'whale' meat to unsuspecting consumers. It's important that we keep vigilant -- this kind of evil cannot stand the light of day. 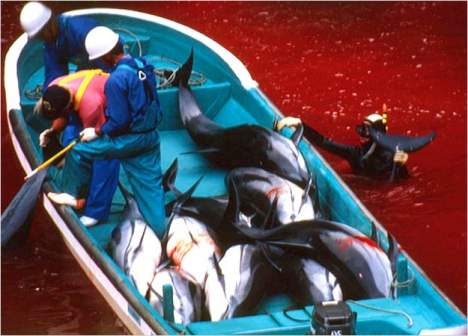 O'Barry is quick to point out that it is not the townspeople of Taiji, but rather 26 fisherman responsible for the dolphin killings. In response to the call for a boycott from various activist groups, O'Barry told the Japan Times on Sunday that he reversely would like to "anti-boycott Japan." On the contrary, "We want people to go to Taiji, go to souvenir shops and restaurants and spend money to stimulate the economy there," noting that this approach would give the town alternative sources of revenue to selling dolphin meat."

Some critics have questioned why O'Barry, certainly no stranger to risking his life continously through his dedicated activism, has not forged on with a mission to the Taiji. O'Barry responded:

The first part of our mission is to make the world aware that the annual
dolphin slaughter has begun once again and to that end we have been very successful. The media is based here in Tokyo, not in Taiji. It is very difficult to get the media to travel to the remote location of Wakayama prefecture and there is really very little that we can do there. This is not a 'one size fits all' scenario and confrontation does not work here. You have to stay in the game and we are here to stay in the game until we win it." 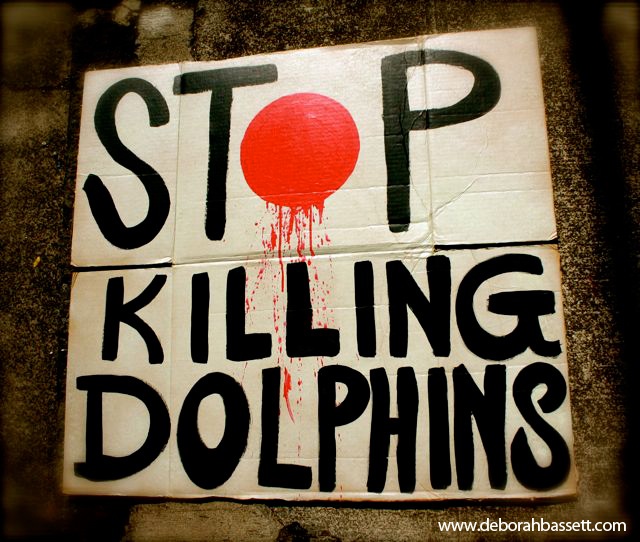 O'Barry further encourages a peaceful non-violent solution to the ordeal. "In order to effect positive change, we have to win the hearts and minds of people," he adds. "We accomplished this recently in the Solomon islands after 450 years of "tradition" -- so this strategy is clearly working." Regarding his steadfast, peaceful warrior approach to the situation, he boldly admits:

I know exactly where the 13 dolphin hunting boats are moored. I know how to sink them without being detected. And if I believed that sinking the boats would end the dolphin slaughter, I would have already done it. But it won't work. It would only work against us. Having worked on this issue for so long, I know that the Japanese media would frame the story in such a way that the 'poor fisherman' would be the victim of terrorists. The government would buy them new boats and they would be hero's. Those of us who are working inside Japan would be banned from Taiji forever.

At present, O'Barry has confirmed that no dolphins have actually been slaughtered and that the fisherman have even released a pod of mothers and babies back into the wild after selecting an "attractive" few to be sold into a dreadful life of captivity via the dolphin slave trade. However, O'Barry cautions that once the cameras and protestors are gone, "business as usual" will likely resume and the fate of the dolphins will be left in the hands of the those that are willing to stay the course:

When we arrived in Taiji last September, the dolphin hunters released about 80 bottlenose dolphin after selecting several "show quality dolphin" for various zoos and aquariums. They went on to kill all other species after we left the area. It seems to me that they will do the same thing this year.

While the updates continue to trickle in from those behind "enemy" lines, it appears that the combined efforts of activist groups and passionate individuals around the world have been collectively victorious in sending a clear message to the Japanese government that the world wide community is indeed watching very carefully and that is perhaps the first step in bringing an end to the outdated, if not barbaric, practice that hides under the false guise of cultural tradition.

Slavery and not allowing women to vote were once considered traditions in America, however when human rights are violated, traditions can no longer be allowed to continue. In this case, the 'tradition' is a myth perpetrated by the few that benefit from the sale of captive dolphins and a cover-up to prevent the truth about the dolphin meat that is poisoning the masses. 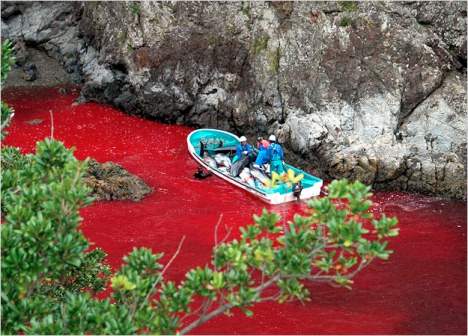 If enough people around the world learn about this "barbaric dolphin slaughter", O'Barry is hopeful that they will take action. He writes:

We have reports from all over the world that the Japanese embassies and consulate offices are being bombarded with messages to stop the dolphin slaughter. Now we need to flood the World Association of Zoos and Aquariums (WAZA) with a message to start policing their own industry. The Taiji Whale Museum (TWM) is directly involved in these captures. TWM is a member in good standing of the Japanese Association of Zoos and Aquariums (JAZA). JAZA is a direct member of WAZA.

O'Barry urges individuals and organizations to "send WAZA a strong message to expel all JAZA members -- especially the TWM -- for violating the WAZA code of ethics."

O'Barry is currently on his way to address members of the Foreign Correspondents Club of Japan, of which he remains an honorary member in good standing. His new series, Blood Dolphins, directed by his son and fellow dolphin activist, Lincoln O'Barry, airs on Friday evenings at 9pm on Animal Planet. For up to date information on the situation in Taiji and to learn how you may take action to help stop the slaughter, please visit: www.savejapandolphins.org

Photo of Ric O'Barry courtesy of Save Japan Dolphins