A Texas community is shocked and furious after one of several wild peacocks that roam the neighborhood became the victim of a bird-napping.

Home security footage from Saturday shows a man snatch the bird by its claws and carry it to a black Chevy Tahoe.

Tisha Crear, who lives in east Oak Cliff, said she heard the birds screaming and ran to the window just in time to see the SUV door slam on the bird's tail feathers, the Dallas Morning News reports.

WATCH: The bird-napping caught on camera, above.

“I run out the front door and I hear the car door slam and I look on the other side of the bushes and I see one of the peacocks, the oldest male peacock –- the one with the long beautiful feathers, in a car,” Crear told NBC DFW. “And the guy slams the door and half of the feather are hanging out of the door.”

The peacock flock has roamed the neighborhood for about two decades and is cared for by local residents.

Dallas Police are investigating the incident, according to CBS Dallas. 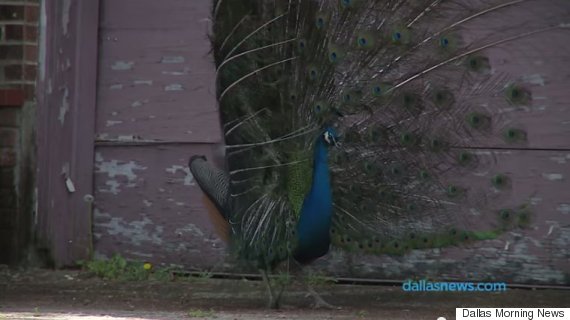