The most important trend in the use of water is the slowly unfolding story of peak water in the United States and elsewhere. Data on US water use are compiled every five years by the US Geological Survey, covering every state and every sector of the economy. The latest data -- for 2010 -- have just been released, and they show the continuation and acceleration of a stunning trend: US water withdrawals, for all purposes, are declining, not growing.

But over the past 40-plus years, this assumption has been proven false. (See previous commentaries on this, here and here.) New limits on water availability, the changing nature of our economy, new technologies that permit great improvements in efficiency and productivity of water use, and new management approaches have broken the two curves of water use and traditional population and economic growth apart.

In short, the US has reached the era of peak water.

Below are two graphical representations of this remarkable change from the Pacific Institute using data on the US economy together with the USGS water use estimates. The first shows total gross domestic product of the US from 1900 to 2010 (in inflation-adjusted 2005 dollars) together with total "withdrawals" of water for all purposes -- from domestic and industrial use to irrigation and power plant cooling. As shown, the most recent water withdrawals data show that withdrawals in 2010 were lower than at any time in the past 40 years back to 1970. 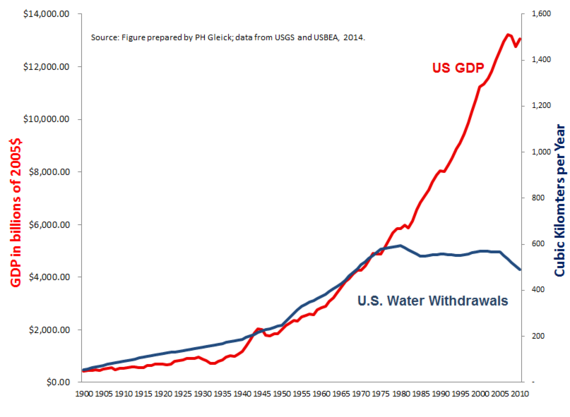 (Total water withdrawals from 1900 to 2010; total USGDP in 2005 dollars. Data from USGS and USBEA, graphed by Peter Gleick, Pacific Institute) 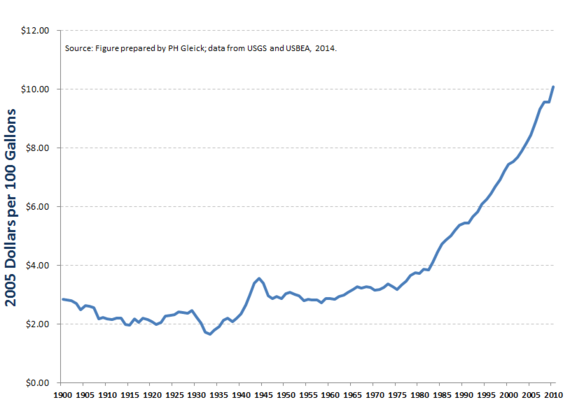 (Economic productivity of water use in the US measured as 2005 dollars per 100 gallons withdrawn. Data from USGS and USBEA, graphed by Peter Gleick, Pacific Institute)

The assumption that demand for water must inevitably grow is false. Let's start planning for the reality that a healthy economy and population can mean more sustainable, efficient, and equitable water use.