Bob Braun, a five-decade veteran of the Newark Star Ledger and currently an independent blogger, blew up a portion of the internet on Friday by reporting that Pearson, the international education giant responsible for the PARCC examinations currently underway, was "spying" on students' social media activity. According to a letter from Watchung Hills Regional High School District Superintendent Elizabeth Jewett, the district test coordinator got a late night phone call from New Jersey DOE after Pearson initiated a "priority one alert" for a breech of test security within the district. NJDOE informed the district that they believed Pearson's alert was for a student who took a picture of a test item during testing and posted it to Twitter, and the state suggested that the district should discipline the offending student. However, upon examination, the district ascertained that a student had tweeted a comment well after testing was over and included no picture at all. The tweet has since been deleted by the student, but given the 140 character limit on Twitter, it is extremely unlikely that any significant breech of test security could have possibly occurred. However, the incident revealed that Pearson is monitoring social media for any and all references to the testing going on and is prepared to initiate state level investigations of individual students (how else would NJDOE know the district and student involved?) over very flimsy circumstances.

The story took off very quickly as did Mr. Braun's accusation that Pearson is "spying" on students' social media. The web site was loading very slowly on Friday night likely due to very high traffic, but by later that night it was completely inaccessible and Mr. Braun reported on Facebook that his web host informed him a denial of service attack was underway from an as of yet unidentified sources. Meanwhile, outraged parents and anti-testing/anti-PARCC sentiments took off in social media: 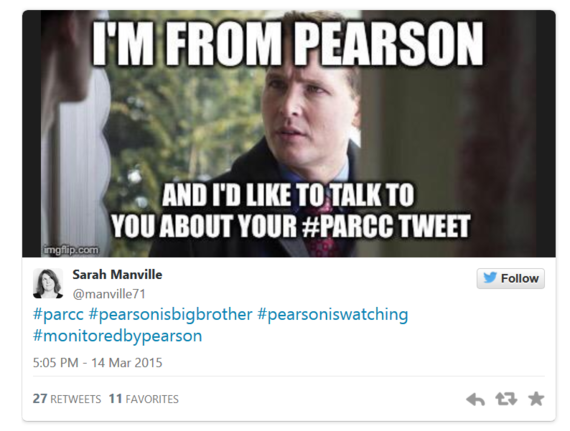 Let me state that I am unconvinced that "spying" is exactly the correct word over "monitoring." The reality is that most corporations of any size are monitoring social media routinely to check on their reputations and potential scandals. In a world where social word of mouth is genuinely a thing, it makes business sense for them to do so, and social media is not communication in the private space. If you don't believe me, wait until you have a bad customer experience with your cable company and then take to Twitter about it -- If you don't get a response from someone in corporate within 24 hours, I owe you a coffee.

However, even from a "monitoring" social media perspective, Pearson's actions are troubling. I will concede that the company -- and participating PARCC states -- have an interest in test security while a standardized test is being deployed (although I also agree with Peter Greene that this level of test security does not bode well for the quality of these exams), but what, exactly, causes Pearson to raise a "priority one alert" and contact a state department of education with sufficient information to locate a district and specific child in question? What information about a minor's social media use does Pearson consider its business to pass along to the top education officers in a state? To what depth does Pearson consider itself able to impose a gag order on other people's children and use state capitols to enforce it?

Remember -- the child in question did not send out a photograph of the exam, merely a single tweet limited to 140 characters AFTER testing for the day was over. For that, Pearson initiated contact with the NJDOE that sent Trenton thundering into the student's social media account and alerting district officials when frankly, nothing should have happened at all. Thankfully, Superintendent Jewett is reasonable and knowledgeable about social media; it could have easily gone south really quickly.

Pearson's hyperactive attitude towards test security is disturbing not only because of how it is being enacted without concern of proportion, privacy, and the implications of initiating state level investigations into unremarkable student speech. It is also disturbing because of its connection to Pearson's larger perspective on its intellectual property and the allowance the public sector gives them in defense of it. While discussing this on Twitter, I encountered a user who stated that he "applauded" Pearson "defending its intellectual property," which led me to a single question:

Why is Pearson's intellectual property even a thing after it delivers a exam to be used for public education?

This isn't even like copyright rules preventing photocopying textbooks -- textbooks publishers rightly expect that schools will buy enough copies of their texts for students using them, and they are in direct competition with other potential text providers. Pearson has an exclusive contract to provide examinations for millions of students (a contract it did not exactly sweat bullets to obtain). These examinations are used for high stakes purposes. The examinations fulfill federal mandates for testing in our public schools, and they inform personnel decisions locally, administrative decisions at the district and state levels, and federal actions nationally. The company is providing a contracted service in our public education system which is, itself, compulsory and, for the time being at least, democratically controlled.

Once they are done writing the exams, why isn't Pearson required to turn the entire kit and kaboodle over to the state and thus to the voters and tax payers who provide the vast majority of decision making and funding to public education?

I am unaware of a construction company that, after delivering a highway project, reserves lanes for its own use or to pull up and recycle in other projects. Generally speaking, government buildings do not have entire floors blocked off for use of the contractors who built them. When Northrop Grumman delivered the USS Ronald Reagan to the Navy, they did not block off sections of the ship that the Navy cannot access. If such companies create or develop a process of construction or tool for use in construction, they can protect that via patents, but once the contracted item is finished, we generally understand it as belonging to the public who paid for it.

But when it comes to items that are not physical in nature, we accept an arrangement where the public foots enormous costs to only lease the product in question. Think of electronic voting machines. I can think of few things as important as protecting public confidence in the integrity of their vote, but companies are not required to make the code for voting machines open source and the public depends upon leaks to inform us of potential security holes in the devices. Similarly, Pearson is providing a mandated service for our compulsory public education system, and the results of that service will have actual consequences not just for the individual teachers and students involved, but also for the entire system. Confidence in what they are providing and informed decision making about whether or not what they are providing is desirable requires open and informed discussion and debate -- such discussion and debate is impossible while Pearson's intellectual property is valued more highly than the public purposes it allegedly serves.

In a small way, you cannot even blame Pearson. They made contracts with states that allowed them to behave this way, and they are a publicly traded company with $17.75 billion in market capital. Doing everything to maximize their revenue and return to investors is what they do and not a secret. However, we elect governors who appoint leaders to state education departments; they represent us. Craven obsequiousness in making contracts worth 100s of millions of taxpayers' dollars is unnecessary and unacceptable. It is possible, I suppose, that if our elected leaders and their appointees insisted upon reasonable contracts and the full disclosure of all test materials after the tests are over, then the cost would go up, perhaps to a level states could ill afford and leading to pulling back of the test and punish regime that is currently driving education policy and warping curriculum into test preparation.

Heavens. That would be terrible.