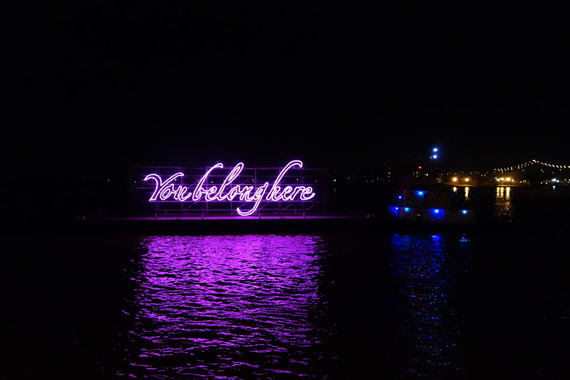 Lighted barge on the Mississippi River. "You Belong Here" by Tavares Strachan

There is a conversation Black faculty often have with Black students that we rarely mention in public, let alone in mixed company. The tone of this exchange differs to some extent if the student are U.S. born or from the diaspora. It follows discussions that open their consciousness as they grapple with accepting an inescapable truth -- they are Black.

It's not that they did not know this. But now there is a new realization that emerges as they are bombarded with intellectual evidence in our classrooms that corroborates their everyday reality. Combined with social interactions in institutions not made in their image, the students confront what the late Martinican postcolonial psychiatrist and philosopher Frantz Fanon aptly calls the 'fact of blackness.' Their bodies are historically coded and permanently marked with significations that forces them into categories they cannot choose. Acknowledgement of this fact comes with the recognition that they will be denied the unearned, social luxuries afforded to their white peers.

When these conversations occur behind partially closed doors, I am met with disbelief, anger, tears and sometimes, even resentment. They cannot help but wonder: Why? Feeling like Dr Doom, I choose to offer support to their youthful spirits as they are further weakened by the realization of the facts of structural racism. I inform them that generations of black folks have had different terms for it: the price of the ticket, or the black tax. They often ask, and I tell them how I navigate it, as I have chosen to be an educator. I admit I rely on, and aspire to, Audre Lorde's teachings. My sanity depends on willingness to "...define myself for myself, [in order to not] be crunched up in other people's fantasies for me and be eaten alive." Either way, in this world where we have been deemed unequal, negotiations are necessary for survival. Education is liberation and knowledge, I insist -- is power.

All the knowledge in the world, however, undermines another fact: we know too well these days that to be young and black is to live in a state of compulsive alertness. Redundant as it may be, it must be reiterated that one cannot drive while black, walk while black, shop while black, travel while black, swim while black, play with toy guns while black, jaywalk while black, protest while black without fear that consequences of being in such interactions at the most could be fatal, and at the least loaded with trauma. For, there is a high cost to disrupting the racialized order of power. Black life is a precarious life. And it is becoming more exhausting as we are regularly retold some bodies are unmournable.

In recent years, the volume of such conversations has decreased. As colleges and universities become increasingly corporatized, the relationship between students and faculty has waned and become less personable. Still, as one of a few black female professors at my university, my office at times, resembles Grand Central Station.

This is just one consequence of teaching in what I call the neo Mad Men era-- this moment in which white males are still over-represented in the profession in this country's top colleges despite the demographics of our general population. Indeed, over the years, I have lived the effects of this as fed-up faculty of color retired early and were not comparably replaced, junior scholars were denied tenure and/or simply moved on, as we grow increasingly dependent on adjunct labor, which is also raced, gendered and has become classed. In turn, those dedicated to this vocation succumb to affective labor that is exploited albeit, somewhat differently depending on the type of institution and the person. The Feminist Wire's Tamura Lomax penned "Black Women's Lives Don't Matter in Academia Either, or Why I Quit Academic Spaces that Don't Value Black Women's Life and Labor," earlier this year echoing the sentiments of many of us. To be sure, for some black faculty, extreme duress is integral to our working conditions: lacking boundaries, protection and inspiration. Backlash is inevitable, once we proclaim we are not genetically coded for service.

None of this is surprising as our black presence at these institutions is a response to previous student demands for diversity. Our continued status as underrepresented indicates that attempts to appease protesters (who graduate and usually become disengaged alums) were at best, temporary solutions. 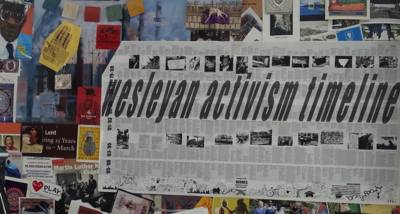 Institutions remained the same as faculty and staff of color were simply added and stirred. Years later, leadership and organizational structures are still whiter as are faculty rosters and curricula. This is more evidence that unless colleges and universities strategically focus on institutionalizing new and/or old initiatives, get creative and restructure keeping an eye on justice, the historically underrepresented will categorically persist as interlopers because the scaffold upholding racism in the academy and outside of it stands to prevail.

This new generation of student protestors are under no illusion. Far from it, they know that they are confronting versions of the same problems that restricted their parents, grandparents and those who came before them. Moreover, they actually want to belong to the institutions. As they challenge the order, it's easier to cast them as lacking resilience than to recognize that they simply refuse to accept their oppression as status quo.

Since most educational institutions claim to be creators of future change agents, in this moment, I am reminded of the words of Black feminist poet Toni Cade Bambara who asserted, "if your house ain't in order, you ain't in order." 'Diversity' and 'inclusion' have become buzzwords de rigeur at universities. In these times, students are demanding that administrations go beyond rhetoric and, in the process, engage with the structural history of inequity that is foundational to most institutions of higher learning in this country. From Mizzou to the latest, each new protest and demands list confirm that change must begin at home.

Indeed, as educators, we cannot keep asking students to do something that we are unwilling to do ourselves. To sincerely cultivate belonging, institutions must: 1) rethink the value ascribed to the presence of the underrepresented as sufficient tools to address diversity; 2) consciously commit to institutionalized concrete longitudinal and multifaceted approaches that address and redress patterns of inequalities; and 3) support collective practices and experimental spaces that will inspire new communities to flourish

The question remains whether institutions have the will and are ready to face the inherent challenges to move onto this path of greater belonging?