There is a mini-poster by journeyman printer Amos Paul Kennedy on one of my bookshelves. This black block print on cardboard contains an equals sign with the caption "Equality is a special PRIVILEGE for Blacks these unitedstatesofamerica." USA is spelled out in lowercase (as presented), as a single word, bracketed by the stars and stripes upside down ― a signal of distress. I also keep a copy in my office where I teach to look at everyday as a crude reminder that in the eyes of the law, Whiteness is supreme, we (Blacks) were never equal, and know full well, we still are not. 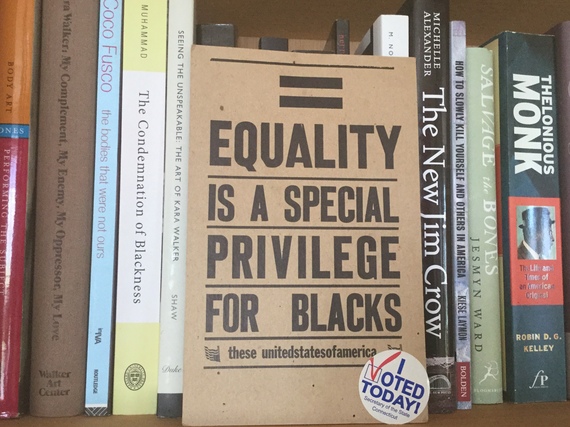 We live in a market economy, where the value ascribed to Black bodies remains high only when we reinforce the state of our original conditions as human chattel. Property. Slaves. We were restricted by a system of codes, rules that managed our behavior and manners back then. In a sense, we still are. Lest we were to forget, or if and when we dare to question this order of things, the price for our disruption is a lashing of one kind or another from the seemingly benign, to the fatal. In her award-winning Citizen: An American Lyric, the brilliant poet Claudia Rankine puts it this way, "because white men can't police their imagination, Black men are dying". The fact of our Blackness to paraphrase Frantz Fanon, is non-negotiable, since our belonging in this society has always been provisional. Human chattel. Property. Slaves. As the great James Baldwin once wrote, "we could hope to arrive only by imitation." We are rewarded in the myriad ways we are accorded opportunities to uphold and re-inscribe White supremacy. So the message, just in case we didn't get the memo, is clear: This is a White world. The story of our existence therein is one of inequity that, at the least, requires our infantilization to thrive, and at best, our absolute submission to survive. There are no boundaries and protection. Respect is exclusively reserved for Whites only. It is their birthright. Stay in your place.

I woke up too early this morning and broke my own rule by going to social media. I inadvertently saw Lavish Reynolds' livestream video of the police killing of her boyfriend, Philando Castile, on my Twitter feed. Caught up, in a sense of outrage, disbelief, and shock, I tried to suppress it. I was still processing Alton Sterling as another victim of police violence days before, trying to decide whether to write about it. I decided against it (because I can), and also pondering like Roxane Gay ― what more could be said that has not already been said? My vocabulary does not need to expand to rephrase what members of the #BlackLivesMatter movement have been demanding in three words: Stop Killing Us!

I avoid these videos. There've been so many. They stay with you and threaten to desensitize you. They are numbing us to the spectacle of Black death according to Jamil Smith. More evidence of the normalization of a civilization predicated upon the near annihilation of a people and the fortification of a nation intimately structured with violence. That's always been the hypocrisy in our moral values. We remain cavalier in our practices of discard and "so aghast" by the racist rhetoric of he who shall not be named.

My FB feed contains continuous advice from folks warning each other to avoid encounters that will further aggrieve this trauma. Human chattel was always disposable. Property's value depreciates. Slave need to be dominated. Each hashtag memorial, and media report that reverts to stereotypes, become new trigger points. Reminders of how White Power works. Last summer, the incessant assault on Black Lives prompted @eveeeeezy to suggest a more vigilant approach to self-care. It may have been delivered with comic relief, but "Calling in Black" was a cry of "Enough!"

Indeed, the devaluation, embodied or otherwise, takes its toll. #BlackLivesMatter made its way into the Ivory Tower with the student uprising last fall. Institutions, not made in our image, were forced to confront their Whiteness and their cultivation of "exclusionary practices." Centuries later, we did not, and could not, escape the fact of our history. It has simply been digitized.

As an educator in an historically white institution, inspired by Paolo Friere's Pedagogy of the Oppressed, I have been confronting this dilemma personally and pedagogically. I have been reorienting myself interrogating notions of belonging to figure out collective and sustainable ways to deploy my intellectual knowledge in a manner to be of service to a greater good. That is the story I tell myself knowing the greater good often subsumes us and leaves Black folks behind. I have gotten more involved in institutional matters with a mature awareness of the potentials and impossibilities of some interventions. We can't keep running away from the past. Besides, social media has assured we can only run so far; the brutality that used to happen in private is now ever so public. My optimism wanes and my patience continues to be tried with each new extra judicial killing, each exoneration. Each one is more confirmation of the deep rootedness of our inequality. We bear the weight of history so unequally. It is written on our bodies and etched in the color of our skin. Human chattel. Property. Slaves. That is the undue burden, the inequity we live with, that simply cannot be undone unconsciously. Its transformation, if that (I am not naïve), requires so much more than will. To bring about a modicum of change we must not only intentionally attempt, but also be determined, to shift. It will not happen par hazard. Because history has seen to it that the exchange, use, and sign value ascribed to Black lives remains unequal to that of Whites. We are differentially positioned and invested.

What story do you tell yourself to assuage the comfort you find in the social luxury of being in an unmarked body. Your silence is your complicity. Where is your outrage as we all bear witness to this moment?