If you don't have the money to make it aesthetic, at least you can make it functional. This seems to be mentality that Hoboken, New Jersey, America's most walkable city, endorses in some of its streetscape improvements. Considering the high median incomes of this city of over 40,000 people per square mile, it's a bit surprising that it would embark on some visibly frugal solutions. But a quick comparison of two residential intersections shows the more intensive investment to Design A versus the economical, more widespread solution through Design B.

Here is Design A, a conventional bulb-out. 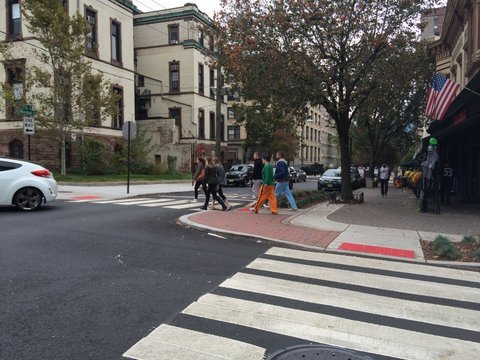 Not sure what a bulb-out looks like? The real intervention here is manifest through the brick planters where the pedestrians are currently standing in the photo, as well as the landscaped shrubbery immediately behind them. This "bulb-out" of the sidewalk causes the street to taper, while a car sits parked on what comprises the width for the majority of the road...except for the bulb-out, where it is obviously much narrower. This design aids pedestrian safety by reducing the distance pedestrians must cross, visible in the subsequent photo taken just a few seconds later. 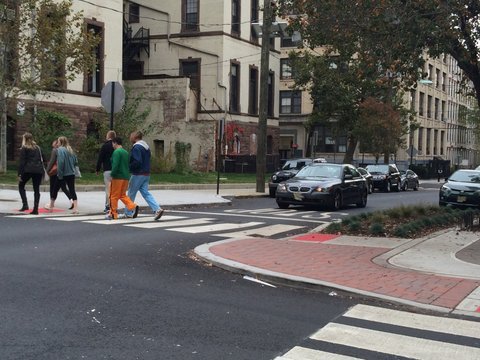 It's possible that the installation of the bulb-out eliminated two on-street parking spaces: one at the site of the low-lying landscaping and the equivalent space on the other side of the street. And in a city where parking is tight, such modest reduction in parking likely raised some objections. But the ultimate objective is pedestrian safety, and, with such intensive population density, Hoboken is fundamentally easier to get around by foot than by four wheels. Reducing two spaces while improving pedestrian safety only furthers what is already one of the city's chief selling points.

But not every pedestrian upgrade looks as lavish. Here's Design B, just a few blocks away: 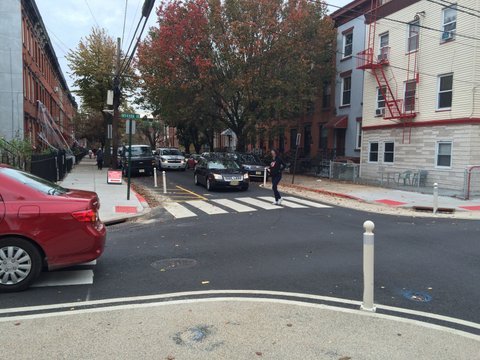 Again, the street narrows at the pedestrian crossing, but the devices indicating a bulb-out include striping, a different paving surface and bollards. It achieves the same effect as the bricked, landscaped bulb-out but with what should be a lot lower budget. From what I can tell, this approach appears much more common in Hoboken. 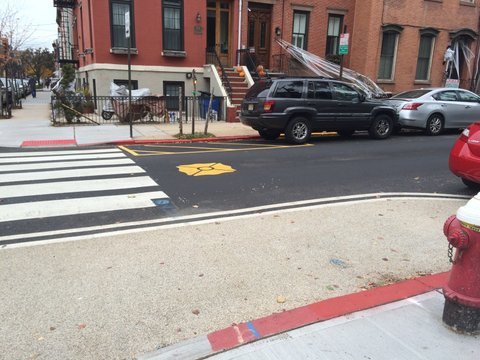 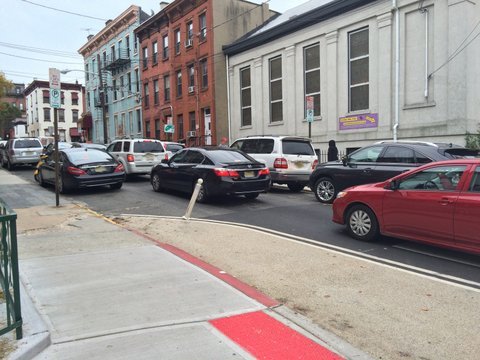 And why not? It achieves the same result for pedestrian safety. Of course, one might argue if it's really worth it on these overwhelmingly residential streets, where maximum speeds are already low, most intersections consist of four-way stops, and the dependence on maneuvering for parallel parking slows vehicles down even further. Are pedestrians really that threatened that they need fancy crosswalks? The fact remains that many of these roads west of Washington Street (Hoboken's primary commercial artery) are one way, and drivers often get both impatient and complacent, accelerating at any opportunity between the numerous enforced stops.

And that's where both Design A and Design B seem more or less equally efficacious. Through the use of cartway obstructions (either bollards or curbs) the design tightens the radius at each intersection, forcing cars--particularly large vehicles that lack good turning radii to begin with--to slow down considerably. Prior to the installation of the bulb-outs, many of these intersections had generous, wide curb designs that would still allow the typical vehicle to turn at unreasonably high and dangerous speeds, which, at a blind corner, could maximize the likelihood of a serious vehicle/pedestrian collision. Now, with the bulb-outs, even the smallest cars must turn with caution. Sure, one could argue that, in Design B, a truly impatient and aggressive motorist could make a tight turn and clock out the flimsy bollard. But such a driver could also swipe across a curb or grade change if he or she is hell-bent on careening through Hoboken. The fact remains that the built environment visibly discourages this behavior to the extent that violating the new standards will likely result in vehicular damage. And it could save pedestrians' lives in the process. 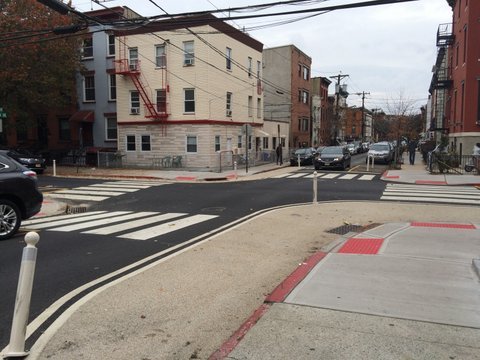 Pedestrians (and their respective advocacy groups) are so used to receiving the short end of the stick in terms of public transportation funding that seeing a bulb-out done on the cheap might frustrate some. Did the budget for the Transportation Alternatives Program (TAP) get cut again? But it doesn't take an expert accountant to recognize that, in this case, it is probable that Hoboken's public works department could improve a lot more intersections in the city with fewer long-term maintenance costs than through the handsome brick-and-landscaping approach. For a city that metamorphosed from "a dump" (according to native Frank Sinatra) in the early 1990s to one of the most fashionable inner-ring suburbs in America, it's easy to see where Hoboken has not yet fully caught up with other northern New Jersey suburbs in terms of streetscape improvements--particularly those that never experienced a real economic decline. By virtue of the fact that it has always been an extremely densely populated city, Hoboken has everything to gain by making it particularly safe for people to get around by foot. For motorists frustrated by the lack of cheap and easy parking, they still have plenty of other more car-friendly municipalities nearby from which to choose. Hoboken's population peaked in 1910, a time when plebeian car-ownership was minimal. With the city's resurgence over the last twenty years, it may return to its peak of 70,000 from a 1990 low of 33,000 (it currently is somewhere around 53,000 according to 5-Year American Community Survey estimates). But it won't get there if it caters to cars in its land use regulations.

Similar reflections on pedestrianism an be found on American Dirt, the author's blog. All photos taken by the author.

More:
travelcrosswalkspedestrianshoboken
Newsletter Sign Up
An essential daily guide to achieving the good life
Subscribe to our lifestyle email.
Successfully Subscribed!
Realness delivered to your inbox