This past weekend, the American Academy of Pediatrics (AAP) endorsed efforts to limit contact practices in youth football, but declined to make a clear recommendation in favor of delaying the age at which tackling is introduced. The AAP likewise refused to support those calling for an outright ban on tackling in football for athletes below age 18, unwilling to recommend at this time such a fundamental change in the way the game is played.

Writing for the AAP's Council on Sports Medicine and Fitness, William Meehan, M.D., Director of The Micheli Center for Sports Injury Prevention at Boston Children's Hospital, MomsTEAM concussion expert emeritus, and an expert featured in our PBS documentary, The Smartest Team: Making High School Football Safer, and Gregory Landry, M.D., a professor of pediatric and adolescent primary care sports medicine at the University of Wisconsin School of Medicine and Public Health, recognized that head and neck injuries in football have been a topic of "intense interest recently in both the public media and the medical literature."

They acknowledged that safety concerns -- especially about the risk of concussions and catastrophic injuries -- have led to a drop in football participation, and likewise recognized that the potential for adverse long-term health consequences from multiple concussions and repetitive head impacts (RHI) had not only prompted calls for limits on the number of full-contact practices and a delay in the age in which tackling is introduced, but for an outright ban on tackling in football.

Noting that the effect of RHI on long-term cognitive function, the incidence of chronic traumatic encephalopathy (CTE), and other health outcomes remains "unclear," and that further research was needed, the group nevertheless endorsed efforts to reduce the number of impacts to the head in football because, "Repetitive trauma to the head is of no clear benefit to the game of football or the health of football players."

The AAP saw in a delay in the age at which tackling is introduced both benefits (a likely decrease in risk of injury) and potential risks (once tackling was introduced, athletes lacking tackling experience might be exposed to an increased risk of injury). The group therefore decided that no "informed recommendation" could be made until further investigation into the effects of delaying the introduction of tackling until a certain age could be made.

Despite recognizing that an outright ban on tackling would likely lead to fewer injuries of every kind (e.g. overall injuries, severe injuries, catastrophic injuries, and concussions), the AAP decided against recommending a complete ban on tackle football, largely because removing tackling from the game would lead to a "fundamental change in the way the game is played." The group thus left it to "participants" to "decide whether the potential health risks of sustaining these injuries are outweighed by the recreational benefits associated with proper tackling." 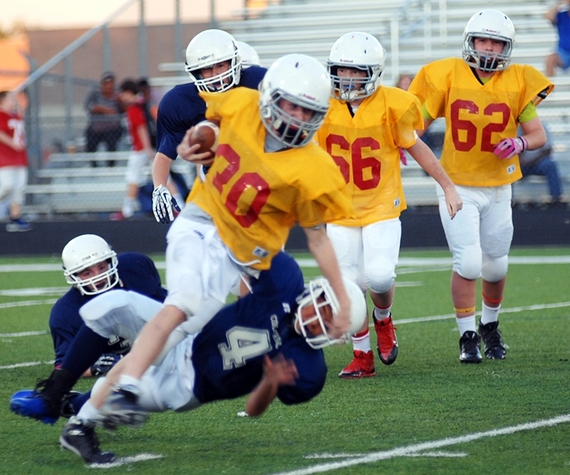 As someone who has been working for 15 years to make youth football safer, I was glad to see the nation's largest and most prestigious pediatrics group support so many of the evidence- and expert consensus-based recommendations MomsTEAM and I have been making to improve the safety of the game, and which were featured in our 2013 PBS documentary.

Like the AAP, MomsTEAM has long supported limits on full-contact practices as a way not only to reduce concussion risk but RHI, which likely plays a role in the development of neurodegenerative diseases such as CTE.

Research presented this past weekend at the AAP's meeting in Washington, D.C. shows that such limits actually work to reduce concussion rates at the high school level (where an increasing number of states have followed the 2014 recommendation of the National Federation of State High School Associations in imposing limits), just as an earlier study showed that such limits (adopted by Pop Warner in 2012) -- along with teaching USA Football's Heads Up tackling -- are working to reduce concussion risk in youth football.

That the AAP decided not to join those calling for delaying the age at which tackling is introduced in youth football was not surprising. As one who has been following the debate on this issue for a number of years, and based on my experience working with youth football programs around the country the past two seasons as part of our SmartTeams program, I think there are good arguments on both sides, and that the AAP was right not to call for such a delay in the absence of more research.

Likewise, the AAP's refusal to recommend an outright ban on tackle football at the youth, middle and high school because it would fundamentally change the way the game is played was not in the least surprising. Like the AAP, I have long held the view that the decision about whether a child should play tackle football, and at what age to start, should be left up to parents, in consultation with their child's pediatrician, based on an honest assessment of the risks associated with the sport versus the benefits of participation.

Recent research shows that teaching proper tackling and limits on full-contact practices, along with other safety measures, such as making sure helmets fit properly, and immediately removing players showing any signs or reporting any symptoms of concussion and not allowing them to return until cleared by a medical professional with concussion expertise (all of which are part of the evidence-based Six Pillars approach to concussion risk management featured in The Smartest Team) has made and continues to make the game of football safer.

Still work to do

But there is still a lot we can and should do. Despite the fact that helmet-first tackling was banned in 1976, the sad truth is that the rule is still not adequately enforced. Perhaps adding the AAP's voice to the chorus of those calling for stricter rules enforcement (the NFHS, for one, has strengthened its rules against "targeting" defenseless players, and "spearing") will finally result in concrete action to do just that.

Likewise, working to put athletic trainers on the sidelines at all tackle football games and practices is a goal almost universally shared by the sports safety community. The challenge, as I have found from my experience working the last two years with youth football leagues around the country, is that not all programs can afford the cost of an athletic trainer; even if they could, finding one to provide coverage on weekends (when most are busy staffing high school football games) can be difficult. Simply put, there aren't enough ATs to go around, with access to ATs in rural communities -- where football is almost a way of life -- presenting a particular challenge).

Thus, while a certified athletic trainer at every youth football game and practice is the gold standard which I have long supported, and we have made significant progress in recent years towards the goal of giving every high school athlete access to an AT (a 2015 study published in the Journal of Athletic Training pegs the percentage at around 70%), I believe, from a practical standpoint, that programs for younger football players (those ages 7 to 12), forced to choose between hiring an AT and shutting down the program, can probably get by with game day coverage from volunteer paramedics, RNs and LPNs, or medical doctors (as long as they have received training in the recognition of concussion), and even from parents and coaches who have completed the CDC's Heads Up program (as parents and coaches in our Grand Prairie, TX SmartTeams pilot program are taking, along with a Red Cross first aid, CPR, and AED course).

If an athletic trainer or health care professional with concussion training is not present, however, experts say that there are two essential ground rules which must be followed: first, if a concussion is suspected (in other words if an athlete exhibits any signs of possible concussion (balance problems, confusion, vomiting, dazed look) or reports experiencing any symptoms (e.g. headache, dizziness, memory problems etc.), the player needs to be removed from play, their helmet taken away, and not allowed to return to play under any circumstances; and, second, if a concussion is suspected, the athlete must be referred for a full evaluation by a clinician; no layperson is qualified to determine that it is safe for an athlete to return to play, no matter what the results of a sideline test may say, even one marketed for supposed use by non-medical personnel.

The under-reporting of concussions by athletes, as Bill Meehan and fellow MomsTEAM Institute board member, Jim MacDonald, reported at the AAP conference in D.C. this past weekend, continues to defy efforts to persuade more athletes to honestly self-report through education. That culture of resistance, and the win-at-all-costs attitude that is deeply entrenched in our sports culture, represents significant challenges to improving the safety of contact and collision sports. Change is not going to happen overnight.

But efforts, including by MomsTEAM under a NCAA-Department of Defense Mind Matters Challenge grant, are being made to move the culture of sports towards safety by working with the key influencers of an athlete's attitudes and behavior -- parents, teammates, and, above all, coaches -- to create an environment in which athletes feel safe in self-reporting and are confident that they won't be penalized for reporting by a loss of playing time or being viewed as weak.

A multi-pronged approach to football safety, such as advocated by the AAP in its Policy Statement, and by the experts with whom I work on daily basis, is working. We just have to keep not just talking the talk, but walking the walk.