No one could doubt that peer-to-peer lending (or P2P Lending) has landed big time in 2010, but it looks as if the best is just about to come.

The U.S. leader Lending Club will issue more than $250 million in loans this year -- greater than the last four years combined -- for a total of nearly $450 million since inception. Their last $100 million increment in their total loan portfolio growth came in just 4 months from the period July through November 2011. Their returns have been stable throughout the market turmoil of the past few years -- thanks in part to their focus on prime credit consumers -- with an annualized default rate below 3 percent.

Prosper has seen 370 percent year-on-year growth in their business in 2011 lending over $70MM this year and bringing their total to more than $260m to-date , with a default rate of around 5.2 percent. Compared with BofA whose default on credit cards has been at an annualized basis of around 5.98 percent this year, down from a peak of 14.53 percent in August of 2009.

Zopa out of the UK has already lent more than £180 million (U.S.$280m), which means they are now approaching a 2 percent market share of the total UK retail lending market. The impressive thing about Zopa's achievement is that their default rates are running at just 0.9 percent.

So who are lending from P2P lending networks?

If you believe the propaganda from the establishment, P2P lending is risky and only offers opportunistic financing to weak credit prospects -- those that can't get loans from traditional players. However, the reality is something entirely different.

The risk profile of P2P borrowers is often grossly overstated, and often the majority are healthy lenders simply looking for a better deal. That's why P2P defaults are often as good as, if not better than, the majors.

"We can offer low rates in comparison to our banking competitors in part because we focus only on a select subset of customers -- the most credit worthy borrowers -- and our fair pricing is commensurate with their risk."
Renaud Laplanche, CEO, Lending Club

The P2P lenders have also done considerable work on understanding the behavior of lenders, thus they don't look just at the credit score (a lagging indicator of a default risk), but also at the future likelihood of a default.

"I think our low defaults aren't just because of P2P but because we built a better credit model, taking more account of over-indebtedness and affordability than banks"
Giles Andrews, CEO, Zopa

These better models are helping P2P to thrive.

Tis' the season for P2P Lending

There are times like Thanksgiving week in the U.S. where P2P Lending is predictably slower than normal, but there are also times when P2P faces natural growth in demand.

"We're gearing up for 50% increase in lending in January 2012, now that we've proven the viability of our business model."
Giles Andrews, CEO, Zopa

I met with Scott Sanborn, the Chief Marketing Officer for Lending Club earlier in the year in San Francisco, but I got together with him via phone last week and asked him if there was seasonality to their lender's behavior.

Last week the Federal Reserve released its latest G19 report on consumer credit. Revolving consumer credit increased marginally (0.5 percent) for the first time in September of this year, and that trend has continued in October. Revolving credit card has been on the steady decline since 2008, down from a peak of $972Bn to a low of $790Bn in August of 2011. In 2009, that meant that every month saw a decline of close to $10Bn in revolving credit in the US. That trend has changed course in the second half of 2011 as borrowers return tentatively to credit facilities. 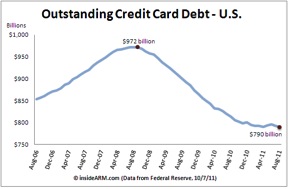 Revolving Credit has been on the decline since 2008,

but this Christmas is set to rise again
(Credit: InsideARM)

Historically, December and January credit card debt always tends to shoot up due to Christmas shopping habits. Online lending around the end of the year has also been steadily increasing due to the primacy of the online channel, so it's no surprise that as P2P awareness improves that P2P lending is set to rise this Christmas season too. The difference this Christmas, compared with the last 3 years, is that with revolving credit flattening out the spike in January is stacking up to be the biggest in P2P's short history.

The other difference (in the U.S. particularly) is that we're seeing more sophisticated investors participating in P2P transactions, meaning that there will be an abundance of cash to support the demand for P2P credit. In fact, the major P2P players in the U.S. are seeing institutional investors, high-net worth investors and the like looking to put cash into P2P. Not just to get a higher deposit rate, but to get that rate with only marginally greater risk -- if at all.

Players like Zopa, Lending Club and Prosper are anticipating their largest January yet. In fact, this season is likely to be larger than the 2008-2010 lending seasons put together for the P2P market. If anyone had any remaining doubts about the viability of P2P lending, then I think we can put that to bed this season.

As the song goes... "It's beginning to look a lot like Christmas!"