In the mysterious zone of things lost that re-emerge, a box of old family photos showed up one day. The pictures inside were loose and wonderfully unorganized. There we all were -- my parents, their parents, siblings, all the cousins, aunts, uncles, and the memorialized unknowns, from every stage of our lives. Pivotal events were interspersed with random moments, all jumbled together, as though time itself was a big, open space of present, presence, and some of it had been captured and put into a box.

Sifting through the assortment of our juxtaposed selves, faces and features seemed interchangeable among the generations: how hopeful, how sad, how strong, proud, vulnerable; how ready -- for a difficult present and an unknown future. How young. And, how shocking to now be older than most everyone I was looking at in the pictures.

Assembling small retrospectives of my parents growing up, I explored my father's face as a little boy, new husband, "self-made man," a person independent of my experience of him. There was a certain look in his face as a child, so earnestly connected to life, a spark that had morphed into a man of determination, sturdy values, unfaltering fidelity to his family. Someone who would rather take the back roads than the main highway, just to see what was there.

It wasn't that I needed to idealize him or forget how impossible it often was for us to get it right with each other -- it was more that I could relate to his struggles and resurgence from the vantage point of my own, seeing him with the perspective and empathy of a peer, not just a daughter. His indomitable refrain, "You are what you think about!" echoes still, and with more layers of meaning now. I remember as a child the days he would put on his suit and tie first thing in the morning, though he had no job to go to. It's moments like that that flicker back, inbetween the photos.

My best moment with my father almost disappears when I try to pin it down, like a dream I once had where I was trying to photograph a rainbow that faded every time I grabbed my camera, and returned in full saturated color when I would put the camera away. As he lay unwakeable, unreachable, I whispered goodbye, and thank you, and all wordless statements. Suddenly he opened his eyes and faced me. All personality had dropped away. He was just essence, love. What passed between us in an immeasurable moment completed our time together, our perfect moment that happened quietly without preface.

Sometimes in a glimmer you know what you know, as it is, like opening a box and seeing what's there. 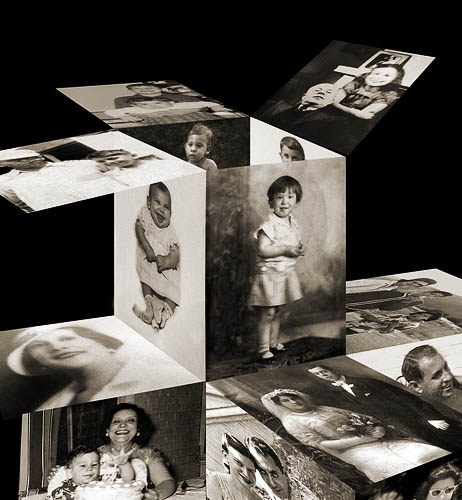