The clusters of barnacles on the corroded hull of the old ship form the rocky shoreline in this impressionistic tribute to Monet by the Spanish street artist Pejac. Here on the shores of Cantabria in northern Spain, he bobs in the low tide while recreating a scene from a hundred forty or so years earlier over the harbor of Le Havre, France. 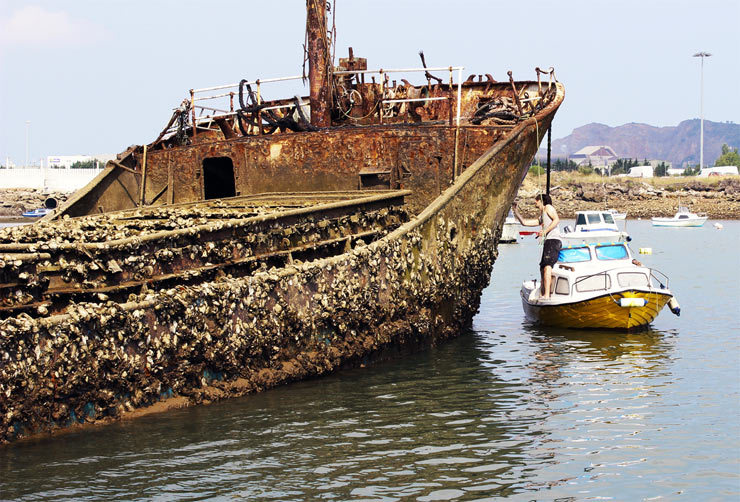 He says the tide alternately hides and reveals the work to passing vessels depending on the day. The original Monet work, 'Impression, Sunrise" was the inspiration for the very term Impressionism that was eventually applied to an entire movement of French painters who eschewed the rigidity of realism in favor of intuitional readings of light and movement in the material world. 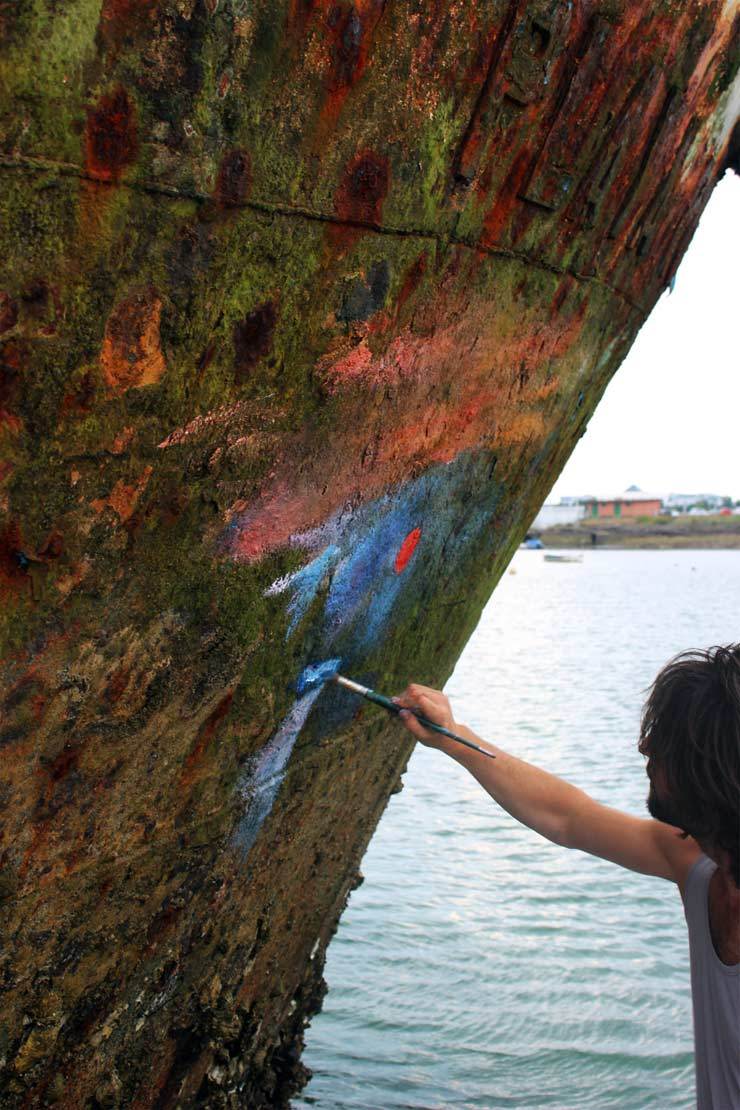 "'Impression Sunrise' is an image that has always amazed me," says the artist as he describes how he worked with the mottled surface to produce additional effects of movement and light in Santander. "The first time I saw the Monet painting I was surprised by the title as I thought it was actually a sunset."

According to historians, many viewers thought so at the time as well, and for a while, a debate raged about the time of day Monet painted it. Interestingly, the exact time of this sunrise was announced just over a month ago by Physicist Donald Olson of Texas State University, who has calculated the painting to have originated November 13, 1872, right around 7:35 a.m. local time. 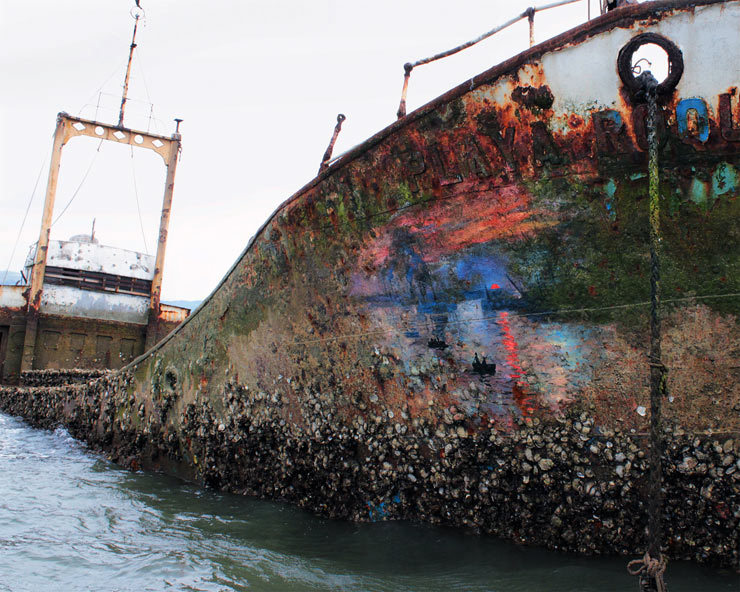 But it's the site specificity of this sea-vessel wall that makes this tribute so meaningful to Pejac. "I think that the rusted metallic hull of this semi-sunk ship gives life to the image. With the daily sea tides of the Cantabric ocean the work is constantly above and below water," he says, and because of it "the sea acts as a theater curtain."

In his studio work Pejac tenders illustration style scenes of slightly askew possibility: clever visual metaphors that repurpose everyday events and objects and venture into the fantastic and possibly treacherous world of the imagination populated with aspiration, adventure, fears and other subterraneal musings. As a street artist Pejac looks for the rips and tears in the physical world and fuses those musings with a weathered wall or a storm drain, for example, and re-imagines them as passages or windows into other imagined scenarios. Here in the sea, his impressionist tribute takes on characteristics he can't claim authorship of, but he relishes them nonetheless. 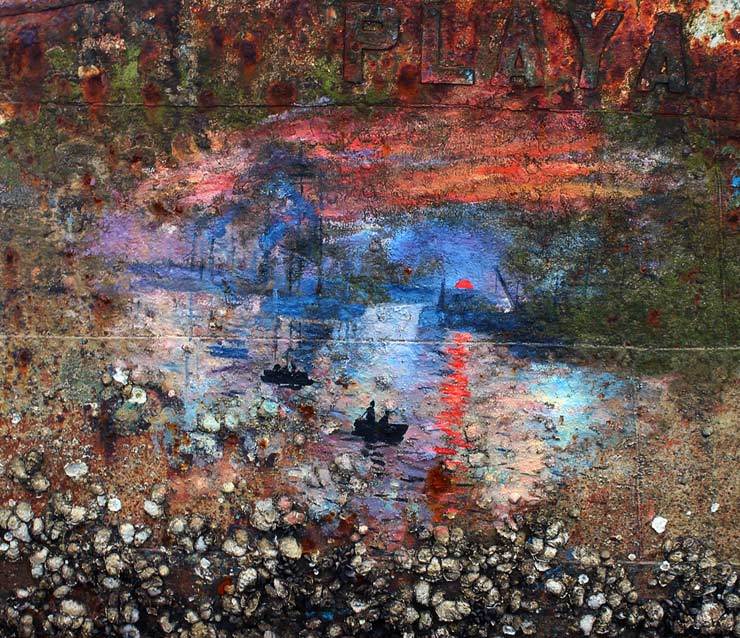 BSA had an opportunity to speak with Pejac and ask him about his practice on the street and how context factors into the process.

Brooklyn Street Art:How long have you been painting on the street?

Pejac: I started working in the streets in 2000 while I was living in Milan, Italy. But after leaving that great city this urge for public transgression kind of disappeared until about five years ago.

Brooklyn Street Art:Would you consider yourself a street artist, muralist, or a fine artist?

Pejac: A mix of all three actually. I just do not see that much of a difference. It's just a matter of where you paint. Nevertheless I am very moved by working in the public space as it is the ultimate form of giving art to people who might have never stepped into a museum or gallery. Sometimes art is seen as something only meant and understood by elite society. By making street art in certain kinds of neighborhoods you are aiming to break up this dumb preconception. 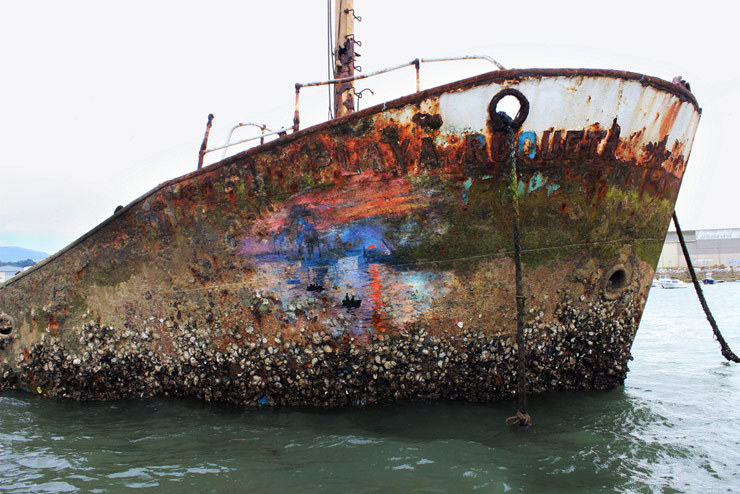 Brooklyn Street Art:Most of your outdoor installations are designed within the context of what already exists and by adopting the existing environments and merging them with your art one can say that your installations are site specific. Do you enjoy altering the viewer's perception with these installations?

Pejac: When doing a street work I always adapt to the very colors, textures and dimensions of the wall or whatever surface I'm working on. But as important as this is, it is also the visual and social context. Despite the fact that we live in a globalized and shrinking world where the artistic language breaks a lot of barriers.. there are still a huge variety of points of view from which to see our lives. Hence one work can have very different readings depending on the context and each work functions according to its location.

Brooklyn Street Art: Which is more difficult? Making a simple presentation, or a complex one?

Pejac: Making a work look simple is quite complex.

Brooklyn Street Art: Whose work on the street do you admire today?

Pejac: There are a few, but for example the work of the French artist Dran always makes me smile. I also find the work of the Spanish artist Aryz very different and stimulating. 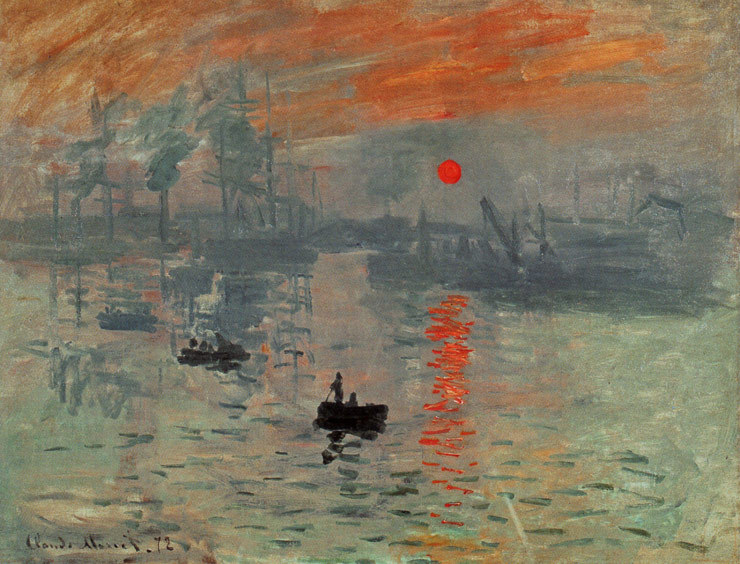 Brooklyn Street Art: Are these illusionary pieces simply to entertain, or do you sometimes have a larger philosophical meaning?

Pejac: I definitely do not see my work as simply entertaining. I'm interested in making people's brains turn, to think! It's like I would like my work to produce the same result as when you whisper into someone's ear. Gentle and discrete - but right into the brain... a whisper in the form of a question.

Brooklyn Street Art: What is the most challenging part of creating pieces on the street?

Pejac: First: Having the freedom of choosing where, how and when to do it. Second: Having a straight-forward communication with the public. Third: Contrary to the work done in studio, this one will never be for sale. 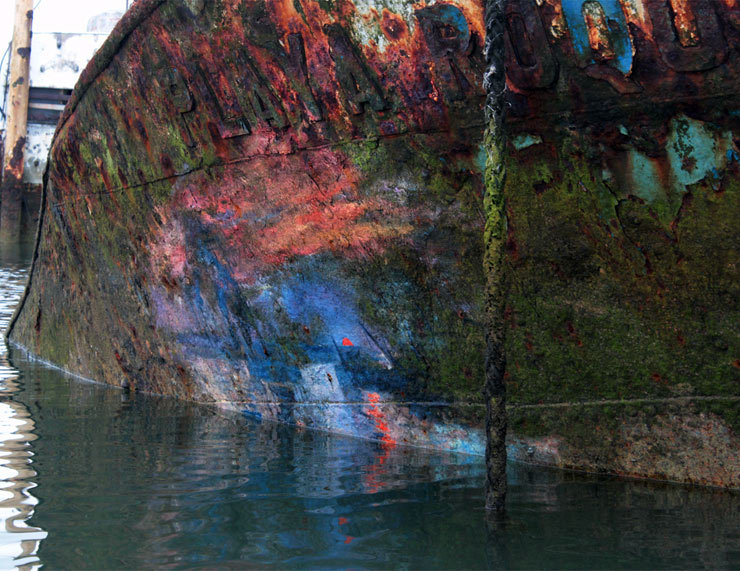 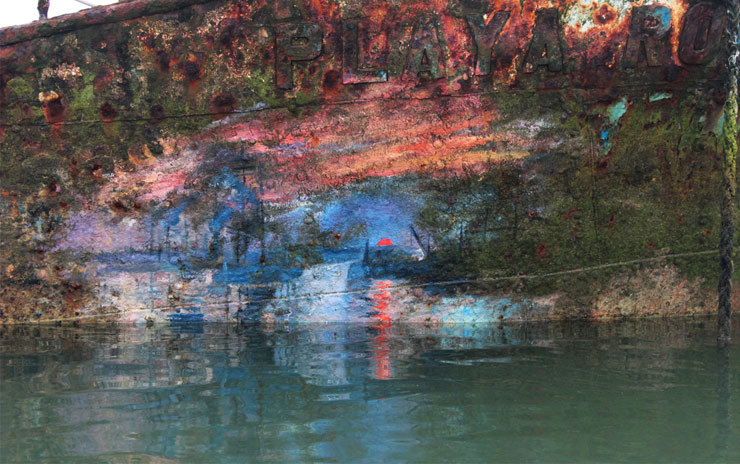 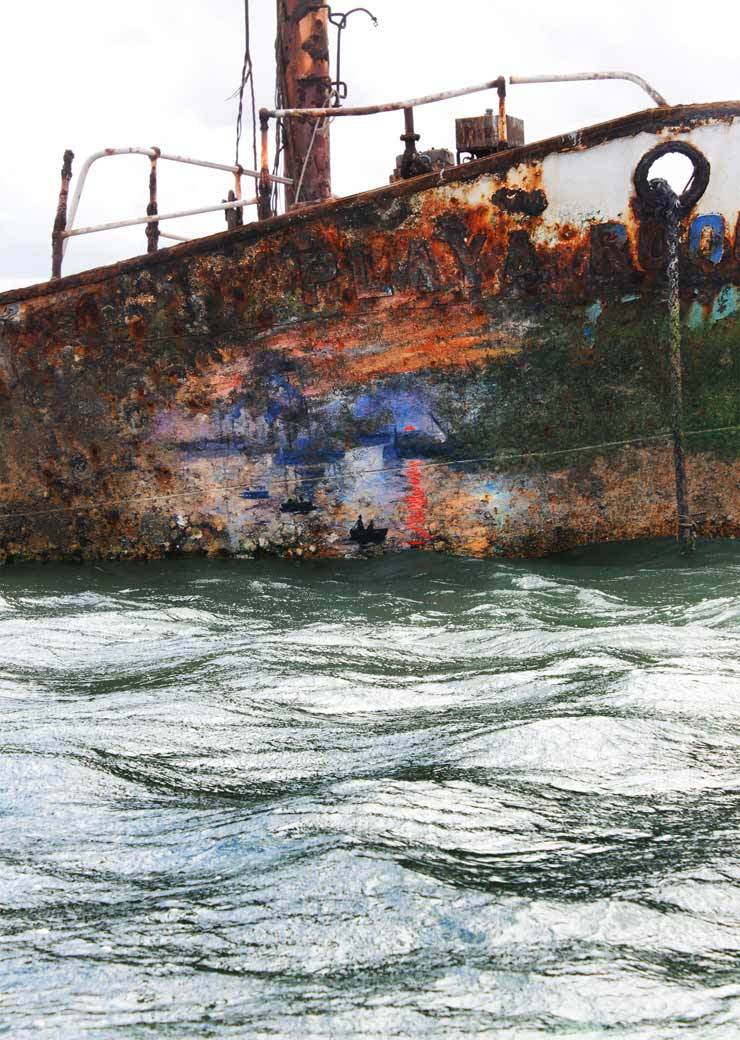