Two members of the audience at House Speaker Nancy Pelosi's (D-Calif.) town hall meeting in Denver, Colorado, on Thursday -- including a toddler in a stroller -- were bedecked with images equating Barack Obama's policies to Nazism and the president to Hitler himself.

The photos, which were passed to the Huffington Post by a Democratic reader, are the latest evidence of the increasingly wild accusations leveled by protesters at health-care town halls -- though these may be some of the more remarkable yet.

In one image, a young man is pictured with a shirt that reads "Hitler Gave Great Speeches Too." TalkLeft blogger Jeralyn Merritt interviewed the teen, who told her was 16 and hailed from former Gov. Sarah Palin's hometown of Wasilla, Alaska. The progressive website FireDogLake, has more.

In another picture, two children are being pushed in a double stroller, with the child in front holding a large white sign.

"No To Fascism!" it reads, with a Swastika crossed out in the upper right hand corner. 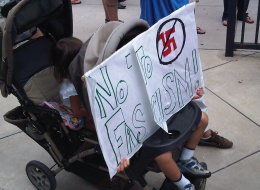 The Nazi analogizers were outliers amid a large crowd of protesters. But it is becoming increasingly clear that national conservatives, who see political benefit in disrupting these events, are fueling the resentment and envelop-pushing action. On Thursday, two of the most prominent figures in conservative media -- Rush Limbaugh and Glenn Beck -- both claimed that the Obama administration was a modern incarnation of Nazism.

"They accuse of us being Nazis, and Obama's got a healthcare logo that's right out of Adolf Hitler's playbook," said Limbaugh.