A British newspaper is in damage control mode after some really sucky sabotage.

On July 19, the Pembrokeshire Herald printed an ad for Enterprise Car Rental. Listed along with such selling points as "low rates" and "Free Pick-Up" was something a car company doesn't usually offer -- "c**ksucking."

And just to be clear, we starred out the second and third letters of that slang term for oral sex. The ad spelled out the word in bold type.

Nearly 20,000 copies of the paper containing the obscene ad had been delivered before the ballsy prank was discovered, the Daily Mail reports.

Other ads were also altered, but none as blatantly as the Enterprise ad, according to the Mirror.

Tom Sinclair, who started publishing the Herald a little more than a month ago, insists neither he nor Enterprise had anything to do with the kinky ad copy.

"A number of adverts in last Friday’s newspaper had additional copy inserted into them after they had been proofed and signed off. The extra copy contained language that was inappropriate for a family newspaper like ours," he said, according to HoldTheFrontPage.co.uk.

"I would like to make it absolutely clear that the adverts were altered without the knowledge of our advertisers or this newspaper.

Sinclair is now trying to get police to investigate the matter, HuffPost UK reported.

The obscene Enterprise ad is being considered by some British media watcher as the worst piece of industrial sabotage to a newspaper since departing Daily Express columnist Stephen Pollard arranged the first letter of every sentence in his final piece to spell out "f*** you Desmond," according to the Press-Gazette.co.uk.

Enterprise Car Rental has yet to comment on the ad. 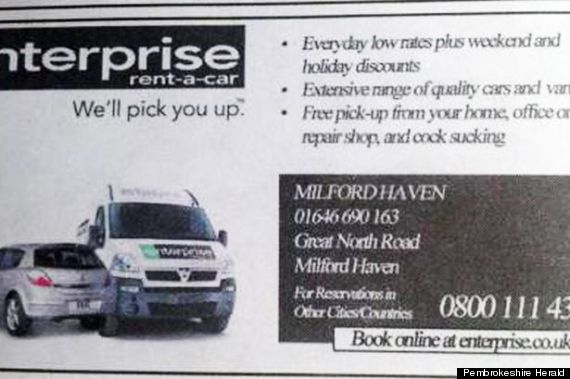