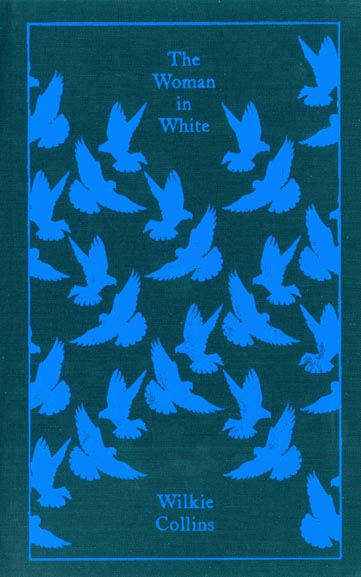 The Woman in White
(Penguin Classics) by Wilkie Collins. Edited with an Introduction and Notes by Matthew Sweet. Cover design by Coralie Bickford-Smith, Illustration (c) Despotica.

The Woman in White ruined my Hawaiian vacation.

My beloved Nora Ephron had spoken of it in terms so glowing ("probably the most rapturous book of my adult life") that I was forced to drag along the 609 page hardcover just in case there was the very small chance that I might enjoy it. At the very least I would feel virtuous for having carried it. Until then, my interest in 1860 began and ended with Abraham Lincoln. Approximately halfway through the second chapter, it dawned on me that I was completely obsessed. If you are in Kauai, trapped underwater in a small metal cage being dangled in front of sharks, trying not to stick out your fingers or toes lest your appendages be mistaken for the tempting snacks the boat captain has thrown overboard and you are still wondering what will happen to Marian Halcombe and Count Fosco instead of your life -- then you realize you are reading a truly engrossing novel.

Penguin Classics has just released a new hardcover of The Woman in White, edited and introduced by Matthew Sweet, a journalist and critic who wrote his doctoral thesis on Wilkie Collins at Oxford. First published in 1859 in weekly installments, The Woman in White was an overnight sensation. It was a favorite family dinner topic, bets were waged over the outcomes, and single men fell passionately in love with its heroine. It was an instant hit then and deserves to be one again.

Modern entertainment is preoccupied with sensory perception. Current films like Avatar are popular because they make us feel like we are actually living the story. Video games are dismissed as old hat unless the joystick actually vibrates our hands until they tremble with fear and excitement. One reason this book has never been out of print is that it gives you physical sensations along with the mental stimulation. It is a literary roller-coaster ride.

The public has been somewhat aware of The Woman in White for a long time, even if not in its original form. It has been made into film, television, theatre and a comic strip. Andrew Lloyd Webber even made in into a musical based on the book. It premiered in London's West End and on Broadway and played as recently as 2006 after being seen by hundreds of thousands of people.

And yet, most Americans are aware of Wilkie Collins simply because Sarah Jessica Parker and Matthew Broderick named their son "James Wilkie." When I tell this to Matthew Sweet, he says, "She should play one of his heroines!" A great idea. And perhaps it would bring Collins to a wider audience. For all of The Woman in White's incarnations in the creative field, Collins is still lesser known than his contemporary and mentor, Charles Dickens.

Reading The Woman in White is not unlike being in a cage surrounded by sharks, if you could somehow eat crème brulee at the same time. It is exquisitely uncomfortable. Sweet compares it to a Hitchcock film, and notes that it is rare for modern literature to engage the physical body as well as the mind. Not only did the book touch the minds of its readers, he says in his introduction, "it aimed to sensationalize them -- to make them catch their breath, their hearts beat faster, their eyes move more feverishly over the page."

This novel may have been dismissed in the past as mere entertainment. But Collins raises social issues that are no less viable today and he is a champion of women's rights. Sweet notes that Collins made the fascinating move of giving his male characters female traits and his female characters typically male attributes. Collins's heroine, Marian Halcombe, is one of the smartest and bravest characters in literature. She is respected and adored by all who know her, she is not good-looking, and our villain is in love with her. An ugly, kind and brilliant heroine who still has sensual allure? Revolutionary! John Sutherland called her, "One of the finest creations in all Victorian fiction." And Sweet calls the relationship between Count Fosco and his wife "one of the most chilling portrayals of domestic violence we've ever seen."

The book was originally published in a weekly literary magazine called All the Year Round created by Charles Dickens. Magazine sales actually increased when The Woman in White followed The Tale of Two Cities, which no doubt must have been a hard act to follow. The novel was written and published in increments and needed to be suspenseful because Collins had to ensure that readers would buy the next installment. The New York Review of Magazines recently attributed the outrageous success of current gossip weeklies such as People, US Weekly, and Star to following the golden rule enacted by this type of literary serialization: "always always end on a cliffhanger." Collins's writing strategy seems to have been our first "Brangelina"!

There is now a passionate debate over whether Collins's famous motto -- "Make 'em laugh, make 'em weep, make 'em wait" -- is actually his, but it fits this book perfectly as we await the verdict. Make 'em argue? The novel was the first of its kind, a "sensation" novel, the alarming and thrilling Gothic literature style merged with a psychological domesticity. Family drama with a twist. Collins called it "the secret theatre of home." It showed that of all the evils and terrors in the world, the most terrifying can happen right where we live. Henry James said, "To Mr. Collins belongs the credit of having introduced into fiction those most mysterious of mysteries, the mysteries which are at our own door." Without Collins, domestic dramas like Mad Men, Six Feet Under, and The Sopranos wouldn't have been possible.

Instead of giving us what we are used to in literature -- a reliable narrator -- Wilkie Collins gives us several narrators and none of them are reliable! They each give us their testimonies like witnesses in a criminal trial. Sweet says, "The narrators are attacked, drugged, tricked and terrified." Their altered states make the reader equally vulnerable and on edge. When our narrator stops speaking and suddenly the next page is blank because they have been poisoned or overcome, the result is completely destabilizing and enthralling. At one point in the story there is a twist so shocking that readers have been known to actually drop the book. Sweet describes it as something "passed to its readers like an electrical charge."

Nothing about the novel turns out to be what we expect, including Count Fosco, one of the best-written villains in fiction. An obese Italian Count who loves vanilla bon-bons, white mice, songs from Naples and feeds lethal chemistry experiments to those who cross him, Sweet hilariously calls him, "The First Godfather."

The Woman In White can be so all-consuming that everyday life goes unnoticed. Or even more incredibly, unwanted. Just as Avatar fans claimed that life felt unlivable once they took off their 3-D glasses, the Amazon reader reviews for this book are show that people can't put The Woman in White down. They are burning their dinners, late for the babysitter, and missing work the next day because they were up all night reading. Nora Ephron was distracted in the sound booth while making million-dollar movies, and I risked life as Captain Hook.

Apparently, ordinary civilians are not alone in wanting to do nothing except finish The Woman in White. Just as Obama read Jonathan Franzen's new novel on vacation, when the book was first published, according to Sweet, "The future Prime Minister William Gladstone cancelled a theatre engagement in order to continue reading it."