Back in March, while everyone was celebrating the triumphs of the ladydom, we gave you an overview of the art world's apparent obsession with vaginas in the name of art, culture, feminism, etc, etc.

Since we're equal opportunists, we'd like to present you another brief explanation of artists' fascination with our naughty bits. This time, we're going to talk about peen! Why's that? Hasn't the male sex organ received enough attention? Because the patriarchy? Because male privilege? Because it's hilarious to draw all over your friend's anthropology notes in college?

Perhaps. But we're going to do it anyway, because art, culture, feminism, etc, etc. To understand this wholly academic topic, we've got to go back in history and wrap our heads around the fact that d*ck pics have been around way longer than Snapchat, starting with…

Earlier this month, an unsuspecting team of archeologists working on an island in the Aegean Sea happened across “tantalizingly clear” penis drawings dating to the fifth and sixth centuries BC, which are thought to be some of the oldest on Earth.

Depictions of penii were common in ancient Greece -- but particularly small ones, which adorn many of the marble sculptures that survive the period. (And yes, we realize "penii" is not the correct declension, but we stand by it because our idea of comedy is indeed stuck in middle school.) Were the men of that time really so poorly endowed? Or did they prefer to feel superior to hunks of marble? Nope. Large penes, actually, were associated with the grotesque. The ideal aesthetic, explained by Aristophanes, was "a gleaming chest, bright skin, broad shoulders, tiny tongue, strong buttocks and a little prick." Ha.

Later, we moved on to…

The Middle Ages: Rivaling that one kid from "Superbad."

Life must have been pretty boring for the person copying out line after line in the pre-printing-press world. Penises show up in the marginalia of several medieval manuscripts from flying green penis monsters to sun-ripened penises dangling from penis-laden tree branches.

In some contexts, one art historian suggested, such dong drawings existed only for luls. "A tree with phalluses is funny throughout the ages," she explained. And while that’s undeniably true, an alternate interpretation suggests a negative connotation. It’s thought that a Tuscan penis tree mural uncovered ten years ago was all political, commissioned by one Tuscan faction to associate the other with "heresy, sexual perversion, civic strife and witchcraft."

After one too many plagues, we got into…

So by this time, people were opening up to the idea that the sun might not move around the Earth, but sculpting a foreskin-covered assault rifle as art still would've been far from kosher. So when an artist wanted to paint some dingaling doodles, he might resort to symbolism -- using food. Yum!

Straight-up male genitalia was also seen -- Michelangelo's "David" is of course one of the Renaissance's most well-known pieces -- but mainly in the context of religious and historical subject matter. It was also still teensy and uncircumcised, because there was a time when people didn't just cut off foreskin (which is probably good, because they might not have realized the importance of sterilizing sharp objects before they come into contact with infant genitals).

Skipping ahead a bit, we run into a…

Scandal in the pre-Raphaelite Brotherhood!!!

Those Victorian goody-two-shoes were hiding dirty pictures this whole time! We see that shadow! We know what that is! Pish-posh.

Continuing on, we move into…

The Late 1800s: When art became harder and harder to define.

In the wake of the Impressionists' audacity to make their brushstrokes totally obvious and push the boundaries of "art" -- which caused a hullabaloo because people were like, "We know what 'art' is, it's pretty pictures of famous white people, okay?" -- came a variety of new schools of thought, including some that combined colorful Impressionist techniques with more definitive outlines, for example. So we got Koloman Moser's "Le Printemps," which features a fairly well-defined member. Other artists, like Egon Schiele, focused on expressionist moodiness in works like "Standing nude man" and "Masturbation 2,” and later wondered why the townspeople didn’t like him very much.

Prior advances in anatomy had begun to influence how art students learned about the human body, too, encouraging them to strive for accuracy. They tried less to recreate Classical proportions (read: teeny peen) than to represent the model’s true figure.

Then, not long after came…

Basically, the Modernists didn't really give two shits because World War I knocked whatever connection they felt to traditional definitions of "art" as loose as Franz Ferdinand's security detail. So when art collectors were "shocked" at the way a guitar could be represented by a collection of geometrical figures, they were like, "Whatever, we're going to paint a train sailing out of a fireplace" and stomped away. Also, they made some d*ck art.

In 1920, Constantin Brancusi scandalized everyone at the Salon de Indépendants when he unveiled a shiny, curved gold sculpture called "Princess X." Supposedly, when Picasso said it looked kind of phallic, Brancusi got all pissy and denied it. But we should note that this was the era of Freud’s whole “subconscious mind” theory that had some artists exploring dreams and symbolism of form. (The subject's long neck in Magritte's "The Rape," above, suggests a phallus piercing its torso-face.) So maybe Brancusi didn’t consciously mean to make a phallic symbol? Maybe? No?

Herman Makkink's fiberglass "Rocking Machine," which bears a clear phallic likeness during its appearance in Kubrick's 1971 "A Clockwork Orange," helped the artist gain notoriety. Drawing on decades' worth of fancy psychoanalysis, Louise Bourgeois coined her slogan, "Art is a guarantee of sanity," and went on to create the monument to reason dubbed "Fillette" -- a giant penis-slash-female-torso. And, among his many representations of household names like Monroe and Campbell, Andy Warhol printed his self-described "dirty art" featuring a dude standing with his legs crossed, fully exposed, and -- and -- full-sized!

Of course there was also Robert Mapplethorpe's "Man in Polyester Suit," famous for delving into LGBT and race issues. It features -- that’s right -- a black man in a polyester suit, with his dongalong casually sticking out of his pants like he forgot about it or something, as one does.

Finally, we arrive at...

Since only a rare few things will shock the art world these days, there are penises seriously everywhere. Examples abound!

“We don't sit down and say, 'This will piss so-and-so off.’ We make the work we instinctively feel like making,” explained punk artist Sue Weber, who, along with Tim Noble, created a mass of phalluses in the mid-1990s that makes a shadow of the couple’s heads leaning back-to-back when light hits it just so. Fellow sculptor Jamie McCartney cast myriad genitalia -- male and female -- to complete his works, which tile together private parts like the world’s most X-rated backsplashes. McCartney says he uses humor to “break down barriers and encourage public engagement with tricky subjects.” Like their nether regions.

Meanwhile, Kristen Fredericks continues to knit more penile creations down in Australia, where they sprout eyes, hang out in packs and, inexplicably, grow breasts. Fredericks, who definitely looks like somebody’s mom, formerly worked as a knitwear designer before she put her considerable needlework skills to better uses.

But in the Contemporary sphere, there’s also...

Performance Art: Penii in the name of politics.

For whatever reason, the Russians are big on the kind of weird art you struggle explaining to your friends. A few months after that one guy stapled his scrotum to the cold Moscow cobblestones in the name of “apathy” and “political indifference,” an art collective known as Voina (or “War”) wreaked havoc on a St. Petersburg drawbridge. In an impressive 23 seconds, nine of the group’s members grabbed some paint cans and splattered a giant penis on the bridge before being apprehended by authorities. Seconds later, when the bridge was raised to allow a passing ship through, a massive dong stared back at the Russian Federal Security Service building.

“It is monumental, heroic, romantic, left-radical, an act of protest,” explained hooligan Aleksei Plutsner-Sarno. “I like it as a piece of work, not just because it is a penis.”

Should you like an unbiased third-party opinion of your budding photography skills, Madeline Holden, who runs the site Critique My D*ck Pic, will* deliver**! Promising “100% ANON, NO SIZE SHAMING,” the New Zealander sheds her lawyer alter ego to pass judgment on some of the many, many, many penis portraits sent to her, saying it’s shown her how “fragile” the male ego is. Maybe you wouldn’t guess anyone wielding civilization’s most time-honored symbol of power and dominance might ever feel “fragile” about it. Yet Holden says the blog has been “an anonymous outlet for them to share their deepest vulnerabilities (and to swing their d*cks around).”

And, finally, who could forget Snapchat, which has truly democratized penis art, allowing anyone to improve photographs with crude sketches.

So that's it. We make penis art, we used to make penis art and, as shown by eighth grader Eliot Ratray on a school trip to a site of 35,000-year-old historic cave drawings, we will always make penis art.

"My friend Ian dared me to draw a wiener [on the cave wall] so I did,” said the youth. “I was going to make it peeing but Mrs. Wiser started walking over.” And an artist was born.

*Maybe
**Depending on level of effort given the submission 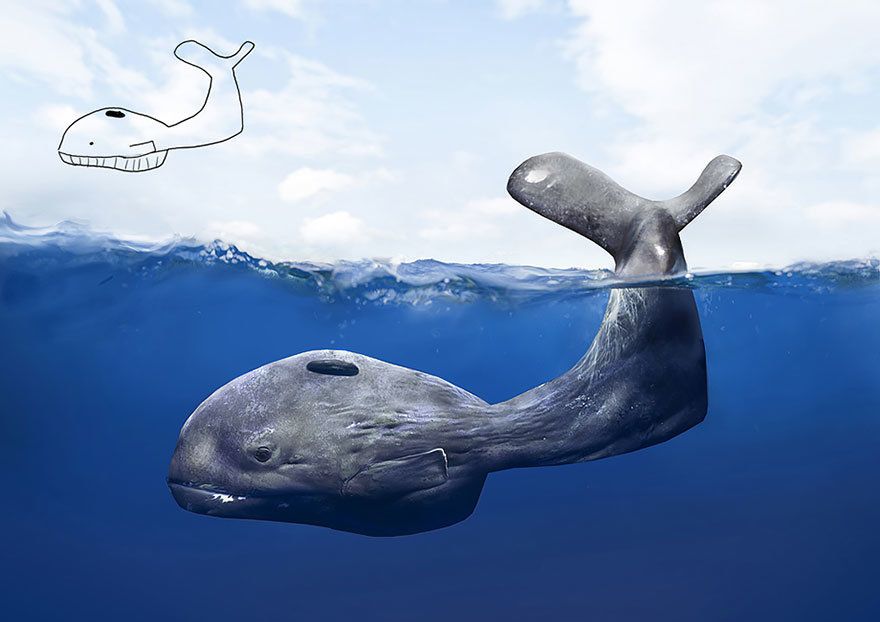