A new species of fish with a penis on its head has been discovered in Vietnam. But it's not what you're picturing — actually it's probably worse. This penis includes a rod and a jagged hook used for grabbing the female during sex.

The fish, Phallostethus cuulong, was discovered by researchers in Vietnam's Mekong Delta. It is the newest member of the Phallostethidae family, a group of fish with small, skinny, nearly transparent bodies that live in Southeast Asia, and which are distinguished by the location of their sex organs.

The more technical name for the male fish's penis is the priapium, a complex, muscular organ that looks like it's attached to the fish's chin. The priapium includes the urogential opening and the anus, as well as a bony rod and a sawlike hook, used to clutch on to the female during mating, the researchers said. The female fish's genital opening is also located at her throat.

The hook may sound sinister but it seems to serve a practical function. For most fish, fertilization takes place outside the female's body, but for the Phallostethus cuulong and the rest of the family, the eggs are fertilized inside. Hooking on to his mate during sex probably ensures that the male fish will have more success in fertilizing her. [See Photos of Penis Head Fish] 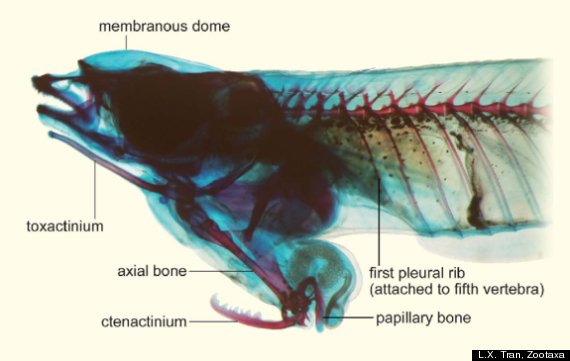 The fish, though bizarre in its penis placement, is not the only organism with a scary sex organ. During sex, the hermaphroditic sea slug, Siphopteron quadrispinosum, playing the male role will stab its partner with a syringelike penile appendage and inject prostate fluids into the body. Equipped with large hooks at its base and several tiny spines, the sea slug penis latches onto the female reproductive system.

Specimens of the new fish were collected and studied by researchers from Can Tho University in Vietnam and zoologist Koichi Shibukawa, of the Nagao Natural Environment Foundation in Tokyo, Japan. The new species is known from nine specimens, six males and three females, collected from shallow waters around banks of slow-flowing turbid canals and rivers in Soc Trang and Tra Vinh Provinces, Vietnam.

A description of Phallostethus cuulong is detailed in a July edition of the journal Zootaxa.