Residents of Auckland, New Zealand are suspicious of claims that these newly-installed aluminum mesh sculptures at a train station in New Lynn are meant to resemble clouds: 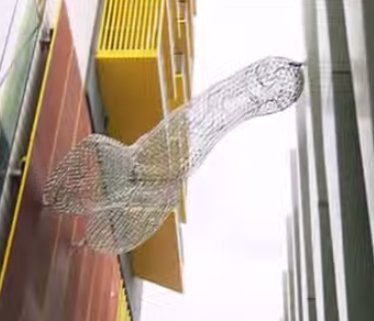 "Oh my God, it's a cock and balls," Phil Wellman, of Blockhouse Bay, told the New Zealand Herald.

Joy Dale, of Mt Roskill, gave the Herald some thoughts as well. “What the hell is that?” she asked. “It’s certainly not a cloud. It looks like a penis.”

The piece, “Transit Cloud," was commissioned by the Auckland Council and is made up of four phallic-looking aluminum shapes suspended in the air. Sculptor Gregor Kegar, artist Sarah Hughes, and architect David Popadich collaborated on the project, according to the Mirror. It cost 200,000 Australian dollars (roughly $156,280).

Kegar says it wasn’t meant to be phallic and that people will like it more after it’s lit up with neon lights.

To be fair, though, there’s no reason to believe the artistic team did not design these shapes after a cloud. They were probably based on this cloud.